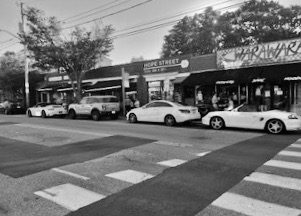 The proposal to study – or conduct a trial – for a potential urban bike trail on Hope Street on the East Side of Providence is set for the first week of October. Data is already being collected with counting cables installed across parts of Hope Street. For the trial week, volunteers have been recruited and assigned to certain locations up and down Hope Street to gather comments, and provide information. Volunteers will be given free t-shirts from Frog & Toad, ordered by PVD Street Coalition. The data is intended to provide guidance for moving forward – or not – with a permanent bike lane on Hope Street, from Tortilla Flats up and past the Hope Street Village, or Merchants area.

The group gathering the study is the PVD Streets Coalition – the bike advocacy group, itself – the group charged with putting bikes all around the city and implementing parts of the Great Streets Plan for Providence. The data collection will not be independently done by a professional group with no vested interest.

RINewsToday, working with veteran correspondent Roger Schreffler, who lives in the area and is challenging the efficacy of the project, has raised the issue of the Coalition’s conflict of interest with two of the mayoral candidates who lost in the Democratic primary last week, Nirva LaFortune and Gonzalo Cuervo. LaFortune still sits on the Providence City Council, until January, when the Council successors are sworn in. LaFortune represents Ward 3, where the street trial will be conducted.

We have also reached out to the mayor’s office, which hasn’t returned our calls, and AARP Rhode Island, which is providing funding for part of the trial.

One issue that has been raised to AARP-Rhode Island is that eliminating approximately half of the parking in the area is not senior friendly or conducive to those with physical disabilities, both minor and major but especially those who use various “assist” devices that must be removed from the vehicles they are in, such as walkers, canes or wheelchairs.

Last Friday, the group put a notice out in certain venues such as Facebook inviting people to attend a “film event” on October 6 at Festival Ballet, a cultural institution on Hope Street, where it will showcase a documentary called “The Street Project” and host the director who, according to the notice, wants to “reclaim our largest public spaces – our streets.”  The Coalition also announced that Providence Mayor Jorge Elorza, the driving force behind the city’s “urban trails” project is said to be making opening remarks at the film event. Mayor-elect Brett Smiley has also been extended an invitation to attend the Festival Ballet film event. Our understanding is that Smiley hasn’t responded to the Coalition yet. But the incoming mayor has expressed reservations about both the project and the trial, and has indicated he will look at bike trails on roads in Providence as a whole.

We reached out to Liza Burkin, an activist who identifies herself as the “lead organizer” at the Coalition, for comment. Burkin didn’t respond despite the fact that she’ll be administering the trial. In total, RINewsToday has emailed Burkin 13 times, since the project was first announced, seeking more details, never to receive a response.

While much detail goes in to planning for and implementing “trials” of on-road bike lanes, with the hiring of community advocate workers, mailings, meetings, etc., little is done after a bike lane is installed to measure its effectiveness or tweak problems with it.

The Coalition has been involved in the failed bike trail on Eaton Street, along the side of Providence College. Working without neighborhood support, over $75,000 was spent to install the bike lanes – and less than 6 weeks later, $75,000 was spent to remove it after neighbors and college officials complained how unsafe it was making any kind of transportation on the street.

A trial in East Providence resulted in an abandonment of their bike lane project.

Other bike path areas the Coalition is looking at or has already done include Broad Street, South Water Street, North Main Street and Allens Avenue.

The Broad Street bike lane is under scrutiny, with nearly no one using it, comments about how unsafe it makes it for pedestrians coming out of stores or attempting to cross the street with e-bikes, and skateboards “zipping down the lane at a high rate of speed”. Even avid bikers are noting its unsafe conditions. Sent to us were a series of photos on Broad Street taken over time to show nearly no one using them:

Mayor-elect Brett Smiley has also been extended an invitation to attend. Our understanding is that Smiley hasn’t responded to the Coalition yet. But the incoming mayor has expressed reservations about both the project and the trial, and has indicated he will look at bike trails on roads in Providence as a whole.

The Mayor spoke to Gene Valicenti in an interview – his interview, below, followed his statement to RINewsToday that he “would take the feedback of all the people involved—business owners, local residents, drivers and cyclists—and be willing to modify the plans to reflect that feedback if it turns out that the plan doesn’t work or if we need to make changes to it.” He added, “As for the trial, we can expect a convergence of bike riders onto Hope Street, which will, it is unavoidable, raise questions about the data. Since I wasn’t part of the original decision process, I’m more interested in community feedback.”

To hear Smiley speak on the bike path projects advance to approximately 7:10 at the link below the photo, here:

Smiley said on radio, “Real cities have bike paths and Providence can too,” adding: “I think we need to think more thoughtfully about bike paths in Providence…One thing different than I think the current administration is, I am willing to hear feedback that might be contrary to what my plans are. “And if the business owners and residents don’t want it, we won’t move forward because it does seem like it’s been full steam ahead regardless of the feedback.”

Click on the red arrow to listen to the interview:

What the community says

Clearly, the most important impact in dollars and cents will be for the small businesses that dot the Hope Street Village and beyond. Feedback from many residents is that the Hope Street business owners oppose the bike trail and trial. On August 22, more than 20 of them wrote a letter to the Mayor, Jorge Elorza, the Providence Planning and Development Department and the Providence City Council, asking that the city reconsider the wisdom of a bike path in what is already a congested, busy roadway.  RINewsToday has been sent copies of other letters that businesses have set separately, all surprised to have no response. The August 22nd letter expressed skepticism of any data “compiled and presented by agenda-driven volunteers” and said that going forward, if we must, we call on city officials to require that any data gathered and used be collected by a neutral third party.”

The merchants further commented: “We are dismayed at the lack of transparency surrounding this project. For instance, how and why was the Providence Streets Coalition given permission to co-opt a busy commercial street even for a week for this trial?”

They added: “This project is not being planned ‘with’ us as advertised, but ‘despite’ us.”

Photographs taken by RINewsToday of the parking situation on both Hope Street and the side streets around the business district show a greater rate of parking occupancy than stated by the Providence Streets Coalition, which reports, “The highest occupancy rate at the busiest time (Saturday afternoon) is 35%…”

The occupancy rate we found in our unscientific look-see seems more than 90%, sometimes approaching 100%, in the blocks between Lauriston Street and Rochambeau Avenue, which comprise the center of the business district. Regardless of the percentage, getting a parking spot on Hope Street during key times of the day to go to a restaurant or shop, is always a challenge, by any measure.

With Hope Street being so narrow, already, buses will not be able to pull over to pick up people at the edge of the sidewalk, so traffic will line up, conga-line-like, with no one getting around them.

Several first responders spoke off the record saying that they avoid Hope Street as it is now because of how dangerous it is to travel at a higher rate of speed with no way for cars to pull over, and high pedestrian use. Entrances to Miriam Hospital are off this area, usually accessed by Hope to 4th to Summit.

One of the problems with the great advantage of the farmers’ market and other events held at Lippitt Park has been parking – neighbors in the surrounding areas often put chairs or orange cones in front of their driveways to block cars who park and block them in, or out. Removing even more parking spaces would make neighborhood parking worse.

Separately, RI News Today has confirmed that neither the city nor the state nor the AARP has data about how the project might impacts seniors in Ward 3. The state’s Office of Healthy Aging (formerly the Rhode Island Division of Elderly Affairs) was not aware of the situation that has been raised.

The AARP has refused to share the Coalition’s application so that we can see what if any data was included and what the funds of $12,574 are to be used for.  The PVD Streets Coalition and city Planning and Development Department have also refused to provide details about who the other funding sources are, but did confirm that there are others.

Tim Rondeau, director of communications and external affairs for the department, said his team had no input in drafting the questions used by the PVD Streets Coalition for an “online” survey conducted last November and delivered to select residents in the ward by way of postcards in mailboxes.

A majority of streets in Ward 3 were not surveyed. Moreover, the survey did not go out in the city’s name.

We have also requested a copy of the AARP proposal from Nirva LaFortune.

Other sponsors, from our research, appear to be 3M and Spin, the latter one of the electric bicycle and scooter sharing companies doing business with the city of Providence.

We also reached out to Grow Smart Rhode Island, which, according to John Flaherty, Grow Smart’s deputy director, is the “fiscal sponsor” for the Providence Streets Coalition. Flaherty said any questions about why the city chose an advocacy group to conduct and oversee the Hope Street project should be directed to the city.

$6.6M to improve Woonasquatucket, Washington, East Bay Bike Paths – recently Sen. Jack Reed announced federal funds coming into Rhode Island to improve 3 protected bike paths – the East Bay Bike Path, the Washington County Bike Path and the Woonasquatucket Bike Path. These bike paths are “off-road” and popular with bike lovers and walkers, especially on the weekend. The paths close at sundown for safety purposes as they are not lit and can be rather remote and not visible by others.

Nirva LaFortune plans to hold a town meeting at the Rochambeau Library on Thursday, September 22. She held an earlier meeting, with more than 50 in attendance, on July 18. Some store owners say they never knew about the July meeting and never received notice.

To read other articles done by RINewsToday on various bike lane projects go to: https://rinewstoday.com/?s=bike+lanes