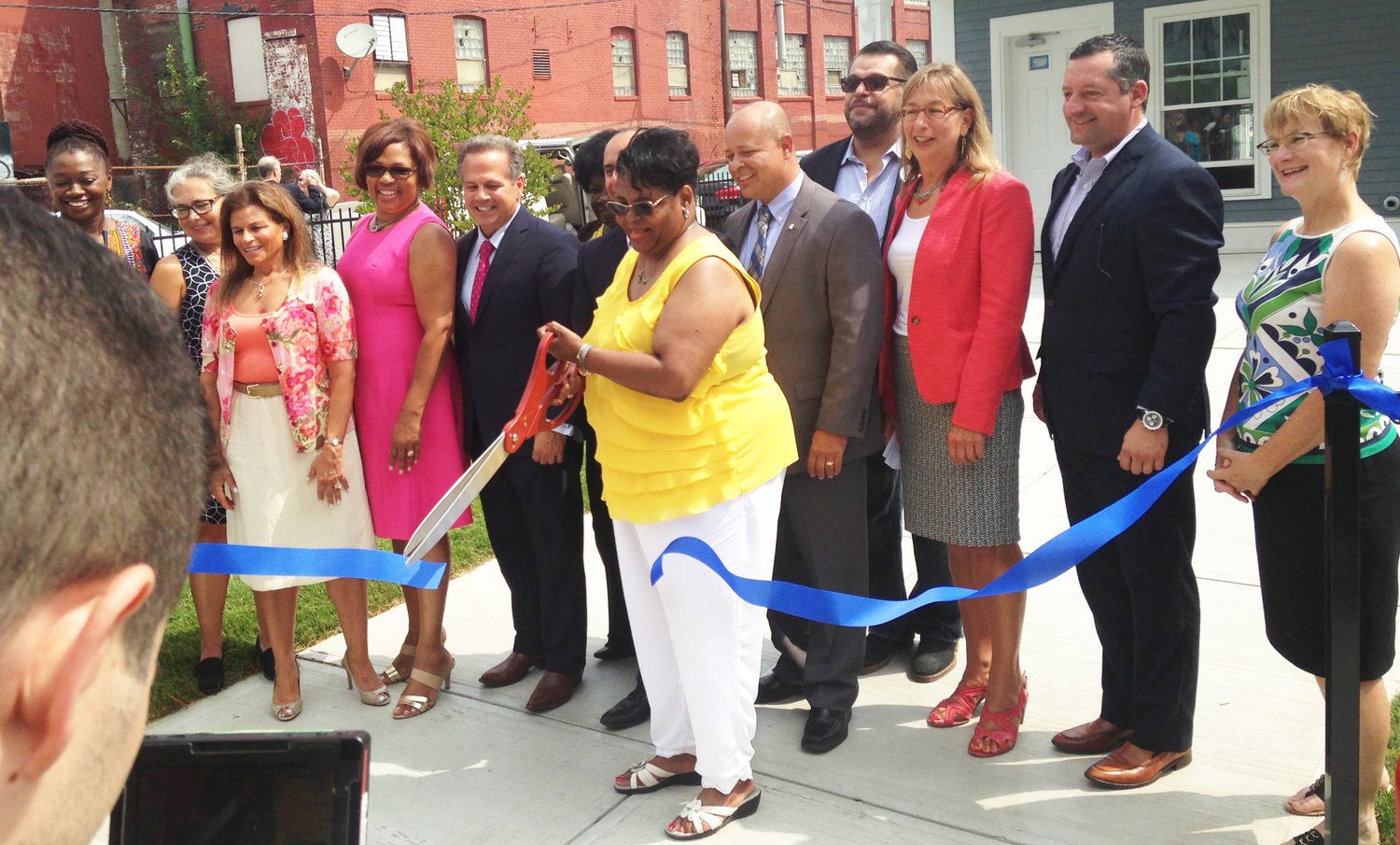 We build houses, community, and lives

West Elmwood Housing celebrates its 50th anniversary, a remarkable story of staying power, making it a wonderful day in the neighborhood

Call it a continuing conversation about community, health equity and neighborhood, occurring in the heart of the West End, a success story of bottom-up innovation at work, one that remains unheralded by many of the purveyors of the Rhode Island innovation economy.

On Wednesday evening, Nov. 13, West Elmwood Housing held the kickoff to celebrate its 50th anniversary at the Sankofa Community Kitchen.

The roots of the organization go back to its founding in 1970, with the goal of creating a small, resident-led community organization run by volunteers to address vacant lots and abandoned properties, during a time of overwhelming disinvestment.

In the 1980s, the West Elmwood Housing Development Corporation was created as a nonprofit, 501 [c] 3, with the mission of developing healthy, sustainable communities to help individuals and neighborhoods meet their affordable housing needs. Its tagline: “We build houses, we building community, we build lives.”

In announcing the 50th anniversary celebration, West Elmwood described itself as “an organization that responds to the needs of the community to meet people where they are. That can mean building houses for first-time homeowners, building community through food and culture at our weekly farmer’s market Sankofa World Market, or building lives by improving educational health and social outcomes for parenting students with Dunamis Synergy.”

For the last six years, ConvergenceRI has made it a priority to report on the emergence of the Sankofa Initiative, an affordable housing development connected to an urban growing space and a community kitchen in the West End of Providence, part of the mission and vision developed by the West Elmwood Housing Development Corporation.

Here are some excerpts from those stories:

• From the April 21, 2014, edition: Under blue skies and bright sunlight, more than 40 neighbors, growers, volunteers and supporters gathered in the West End on April 19 to celebrate the opening of a new community garden on Parade Street, part of the Sankofa initiative launched by West Elmwood Housing Development Corporation.

Sankofa is a Ghanian word that means: “go back and get it.” The newly created “crop” of about 20 raised beds is an effort to use “our traditions to build a stronger West End through healthy foods, economic opportunity and neighbor-to-neighbor relationships,” according to organizers.

• From the August 31, 2015, edition: “This coming Wednesday, Sept. 2, the Sankofa World Market at 275 Elmwood Ave. in the West End, in front of the Knight Memorial Library, will be featuring two recipes from the Dorcas International Institute of Rhode Island cookbook, with two students preparing and sharing traditional dishes and handing out the recipes for the dishes.

The modest local farmer’s market, located in front of the library, which is open from 3 p.m. through 7 p.m. every Wednesday afternoon through Sept. 30, is finishing up its second year of operation.

“We normally have between 11 and 20 vendors every week,” explained Adeline Newbold, who manages the market for the West Elmwood Housing Development Corporation.

• From the October 12, 2015, edition: “The $13.8 million Sankofa Development in the heart of the West End will soon transform nine vacant lots into 50 affordable rental homes in 11 buildings as well as create a community agricultural hub to support the Sankofa World Market.

• From the August 29, 2016, edition: “It was a beautiful hot summer morning as city officials and neighborhood residents came together to celebrate an important community victory in the West End: a ribbon cutting to hail the completion of a vibrant new development of 50 affordable apartments, an integral part of the Sankofa Initiative led by West Elmwood Housing Development Corporation.

The development, spread out over nine vacant infill lots located between Elmwood Avenue and Dexter Street, consists of rental homes in 11 buildings, including one-, two-, three- and four-bedroom apartments.

It features the concept of an urban agricultural center as part of its design, including a new greenhouse funded through Rhode Island Housing, to support efforts to improve the community residents’ access to fresh food from a network of Sankofa growers.

The financing for the $13.6 million project was braided together from a number of sources, including: federal housing tax credits, private equity investments, and a construction loan and permanent first mortgage from Rhode Island Housing.

With Sharon Conard-Wells, the executive director of West Elmwood Housing, serving as emcee, a parade of notables offered their praise and blessings.

• From the June 4, 2018, edition: What a beautiful late spring evening it was on May 31, with the promise of summer lingering in the air, much like the fragrant blossoms of locust trees, a perfect twilight in which to paint the new urban landscape evolving in the West End.

At one of more than two dozen raised growing beds linked to the Sankofa Initiative affordable housing project, with 50 apartments completed in 2016 on 10 formerly blighted vacant lots, a tenant was busy watering her rectangular garden of vegetables, accompanied by her somewhat shy granddaughter. The tenant proudly displayed her growing bed that was filled to the brim with tomatoes, peppers, cauliflower, and beans, among other plants.

Meanwhile, right next door, at the newly completed Sankofa Community Kitchen and Community Center, the West Elmwood Housing Developing Corporation was hosting its first Sankofa Eats! dinner, as part of a series of planned community meals, in the newly finished commercial kitchen space. The dinner featured the culinary creations of chef Michelle Tulloch, the creator of Eden’s Bowls, a business that offers meal prep and planning services, based upon whole foods and a plant-based diet.

Angela Ankoma and Sharon Conard-Wells have won the prestigious 2018 Health Equity Award from the National Civic League in conjunction with the Robert Wood Johnson Foundation for their work on the Sankofa Initiative.

Meeting people where they are

At the 50th anniversary kickoff, ConvergenceRI had the chance to talk briefly with Sharon Conard-Wells, the executive director of West Elmwood Housing, asking her to reflect on what were the key ingredients to the success of her organization.

It was not about coming to the table with the attitude: “I have an idea and that’s the way it’s going to be.”

It was not about winning or losing an argument; rather, Conard-Wells said, it was about learning how to compromise and to prioritize.

Conard-Wells shared a story about how one of her board members went back and read the initial plans for the Sankofa Initiative. As part of that effort, West Elmwood had conducted hundreds of interviews and surveys and held focus groups assessing the community needs around food.

What the board member found, she explained, as he read through the documents, was to see where we had come from, reviewing what our original work plan had been, and where we were today. And, she continued, “How we are so close to making some goals, while others have fallen by the wayside, and where we continue to make progress.”

A culture of collaboration

Conard-Wells emphasized that the work at West Elmwood was not just about her or a reflection of her. “I don’t think it’s just about me. I think it’s about the character of the agency, and our corporate culture, because we all have a role to play.

Photo: Sharon Conard-Wells of West Elmwood Housing Corporation cuts the ribbon to celebrate the completion of a new 50 units of affordable housing, surrounded by supporters, investors and officials.

For full story, go to: http://newsletter.convergenceri.com/stories/we-build-houses-community-and-lives,5342