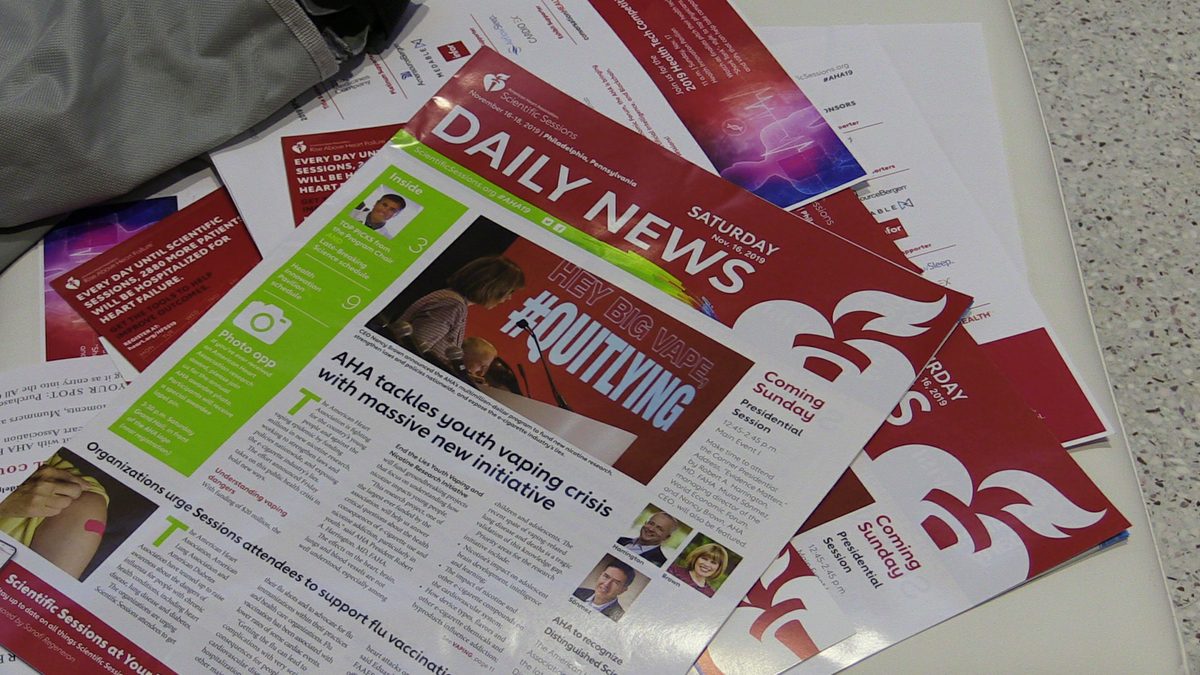 American Heart Association Releases News on Cannabis Use and Vaping

Two topics in the news – cannabis use and e-cigarettes/vaping – have been addressed at the American Heart Association’s annual Scientific Sessions, the premier global exchange of the latest advances in cardiovascular science for researchers and clinicians. “Sessions” was held this week in Philadelphia.

Highlights of the November 11th statement from the American Heart Association:

Frequent cannabis (marijuana) use among young people was linked to an increased risk of stroke and people diagnosed with cannabis use disorder were more likely to be hospitalized for heart rhythm disturbances, according to two new preliminary studies.

The American Heart Association does not have a position regarding legalizing cannabis, however, in locations where cannabis is legal, the Association notes that there should be a public health infrastructure in place that integrates the use of cannabis into comprehensive tobacco control efforts such as age restrictions for purchasing, comprehensive smoke-free air laws and other measures.

“As these products become increasingly used across the country, getting clearer, scientifically rigorous data is going to be important as we try to understand the overall health effects of cannabis,” said Robert Harrington, M.D., president of the American Heart Association and the Arthur L. Bloomfield professor of medicine and chairman of the department of medicine at Stanford University in Stanford, California.

Stroke risk may be higher among young cannabis users

Young people who used cannabis frequently and also smoked cigarettes or used e-cigarettes were three times more likely to have a stroke compared to non-users.

The study also showed that cannabis users who did not use tobacco products but reported using cannabis for more than 10 days a month were nearly 2.5 times more likely to have a stroke compared to non-users.

The cannabis users were also more likely to be heavy drinkers, current cigarette users and e-cigarette users, which may have also influenced their risk, even though the researchers adjusted for those factors in their analysis.

Participants in the study included more than 43,000 adults aged 18 to 44, of whom nearly 14% reported using cannabis in the last 30 days. Compared with non-users, marijuana users were often younger, non-Hispanic white or black, were less likely to be college graduates and were often physically active.

“Young cannabis users, especially those who use tobacco and have other risk factors for strokes, such as high blood pressure, should understand that they may be raising their risk of having a stroke at a young age,” said lead study author Tarang Parekh, M.B.B.S., M.S., a health policy researcher at George Mason University in Fairfax, Virginia. “Physicians should ask patients if they use cannabis and counsel them about its potential stroke risk as part of regular doctor visits.”

People diagnosed with cannabis use disorder had a 50% greater risk of being hospitalized for an arrhythmia, a disorder of the heart’s rhythm, compared to non-users. Cannabis use disorder is characterized by frequent, compulsive use of marijuana, similar to alcoholism.

In this study, young African American men with the disorder, between 15 to 24 years of age, had the greatest risk of being hospitalized for arrhythmia, although cannabis use disorder was more common among white men, 45 to 54 years of age.

The effects of using cannabis are seen within 15 minutes and last for around three hours.

While some arrhythmias are benign, others can be life-threatening. “The effects of using cannabis are seen within 15 minutes and last for around three hours. At lower doses, it is linked to a rapid heartbeat. At higher doses, it is linked to a too-slow heartbeat,” said Rikinkumar S. Patel, M.D., M.P.H., resident physician in the department of psychiatry at the Griffin Memorial Hospital in Norman, Oklahoma.

“The risk of cannabis use linked to arrhythmia in young people is a major concern, and physicians should ask patients hospitalized with arrhythmias about their use of cannabis and other substances because they could be triggering their arrhythmias,” said Patel.

“As medical and recreational cannabis is legalized in many states, it is important to know the difference between therapeutic cannabis dosing for medical purposes and the consequences of cannabis abuse. We urgently need additional research to understand these issues,” said Patel.

According to Rose Marie Robertson, M.D., FAHA, the American Heart Association’s deputy chief science and medical officer, “There is no long-term safety data on e-cigarettes. However, there are decades of data for the safety of other nicotine replacement therapies.”

The American Heart Association (AHA) recommends people quit smoking using smoking cessation aids that are FDA-approved and proven safe and effective. If people choose to use e-cigarettes as they work to stop smoking other tobacco products, they should also plan to subsequently stop using e-cigarettes, because of the lack of information on long-term safety and a growing body of data describing physiologic effects of the components of these devices and the chemical combinations used in them, Robertson said.

E-Cigarette Use is Associated with Altered Lipid Profiles

In one study, researchers compared cholesterol, triglycerides and glucose levels in healthy adult nonsmokers, e-cigarette (e-cig) smokers, traditional cigarette (t-cig) smokers and dual smokers who use both traditional and e-cigarettes. Researchers evaluated healthy adults (ages 21-45) without existing cardiovascular disease and taking no daily medications in the Cardiovascular Injury due to Tobacco Use (CITU) Study. The study’s 476 participants included 94 non-smokers; 45 e-cig smokers; 52 e-cig and t-cig smokers; and 285 t-cig smokers. Analysis was adjusted for age, race, sex, and non-smokers, sole e-cig or t-cig use, or combination e-cig and t-cig use.

Among the study’s findings, total cholesterol and the bad cholesterol, LDL, was higher in sole e-cigarette users compared to nonsmokers.

“Although primary care providers and patients may think that the use of e-cigarettes by cigarette smokers makes heart health sense, our study shows e-cigarette use is also related to differences in cholesterol levels. The best option is to use FDA-approved methods to aid in smoking cessation, along with behavioral counseling,” said study author Sana Majid, M.D., a postdoctoral fellow in vascular biology at the Boston University School of Medicine.

“In smokers who use traditional cigarettes, blood flow increased modestly after traditional cigarette inhalation and then decreased with subsequent stress. However, in smokers who use e-cigs, blood flow decreased after both inhalation at rest and after handgrip stress,” said study author Florian Rader, M.D., M.S., medical director of the Human Physiology Laboratory and assistant director of the Non- Invasive Laboratory, Smidt Heart Institute, Cedars-Sinai Medical Center, Los Angeles. “These results indicate that e-cig use is associated wit persistent coronary vascular dysfunction at rest, even in the absence of physiologic stress.”

“We were surprised by our observation of the heart’s blood flow being reduced at rest, even in the absence of stress, following inhalation from the e-cigarette,” added study co-author Susan Cheng, M.D., M.M.Sc., M.P.H., director of Public Health Research, also at Cedars-

Sinai Medical Center. “Providers counseling patients on the use of nicotine products will want to consider the possibility that e-cigs may confer as much and potentially even more harm to users and especially patients at risk for vascular disease.”

About the AHA Scientific Sessions

The American Heart Association’s Scientific Sessions is an annual premier global exchange of the latest advances in cardiovascular science for researchers and clinicians. Scientific Sessions 2019 had more than 12,000 leading physicians, scientists, cardiologists and allied health care professionals from around the world convene to participate in basic, clinical and population science presentations, discussions and curricula that can shape the future of cardiovascular science and medicine, including prevention and quality improvement.