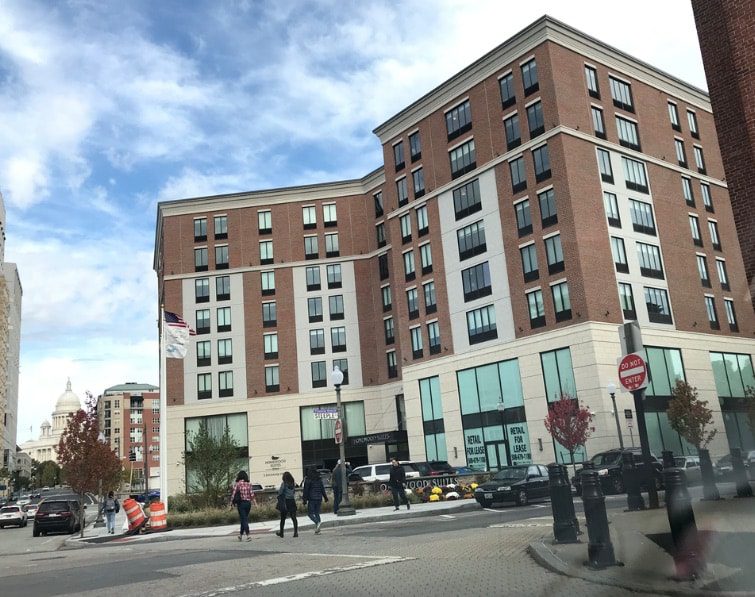 By David Brussat, Architecture Here and There, contributing writer

Among the eight or so new buildings erected in Providence with virtually zero opposition in the past two years are a pair that ought, by now, to have been reviewed here. And I will get to that. But first:

In the [Journal’s] latest damn-the-torpedoes, “build anything anywhere” blast, … the normally estimable Ray Rickman assures readers that opponents of new buildings are “disingenuous” and “vocal naysayers” with “inaccurate concerns.”

Look around at all the projects that have gone unopposed — because they follow the rules. They respect our city’s celebrated grace and human scale.

In fact, eight new buildings were completed in or near downtown since 2017. They are: the Wexford Innovation Center in the I-195 corridor, the River House apartments near the Point Street Bridge, the first of two proposed Edge College Hill residential towers on Canal Street, the low-rise Commons at Providence Station condos along the Moshassuck River in Capital Center, a Homewood Suites on Exchange Street, a Marriott Residence Inn on Fountain Street, a Woodspring Suites just outside of downtown on Corliss Street, and a large RISD dormitory near Prospect Street on College Hill. All eight of these had little or no opposition, let alone interference from city officials.

(Only the Fane tower, at a proposed six times the height originally passed into law for its parcel of land, has generated vigorous opposition.)

I would quarrel with Dana regarding the “grace” of these eight supposedly acceptable buildings and argue instead that all of them should have been opposed. All eight violate the city’s comprehensive plan and zoning, which require new buildings in downtown and in the Jewelry District to respect their historical character. That is a high bar and should be. It protects two entire districts, not just one parcel of land.

The two hotels that opened most recently are the best of the lot. They at least tried. They fumbled the ball: they did not betray the city by purposely running the ball in the wrong direction.

Both the Homewood Suites and the Marriott Residence Inn qualify as “bad trad” – that is, architecture that aspires to embrace Providence’s traditional character but fails. Neither hotel lives up to the standard set by an earlier but equally valid era. Both should have used more traditional features, including richer moldings on cornices and stringcourses, a deeper setting of windows into façades, piers or pilasters between ranks of windows to offer a greater sense of movement to façades, a gentler contrast in color between brickwork and precast stone, and the use of columns and statuary to animate exteriors and embellish entrances and other openings in the base of each hotel.

The Homewood hotel makes a better attempt than the Marriott at living up to its pre-WWII neighbors, but both fall far short of the mark. Both look cheesy next to the old buildings that sit next to them: The Journal Building (1934) next to the Marriott; and, next to the Homewood, Union Station (1898) to its west and the Federal Annex (or Pastore) building (1940) to its south. More knowledge, not necessarily more money, could have served to fit both buildings more properly into their settings.

Providence has tried to market itself as different from other cities, even as it mimics other cities in creating the sort of architectural mishmash that will never cohere into a legible urban character. Both advocates and opponents of new buildings in Providence fail to recognize the vitality of civic character. Buildings that build upon the city’s architectural heritage strengthen the city’s brand. Providence is losing its sense of place, which is its only genuine competitive advantage over almost every other city in America. Beauty is a key facet of the quality of life in a city with major problems that are much more difficult to solve than the architectural problems discussed here.

We may be thankful that the two “bad-trad” hotels tried to keep the city’s beauty in mind, and in so doing tried to leverage design to address larger crises. Their honorable attempt deserves applause, and a heartfelt program to increase developers’ and architects’ (and city officials’!) understanding of classical design principles and their validity even in our era.

David Brussat writes on architecture and issues of design both locally and globally in his blog, Architecture Here and There. He is a member of the board of the New England chapter of the Institute of Classical Architecture & Art, and the recipient of the Arthur Ross Award in 2002.  https://architecturehereandthere.com