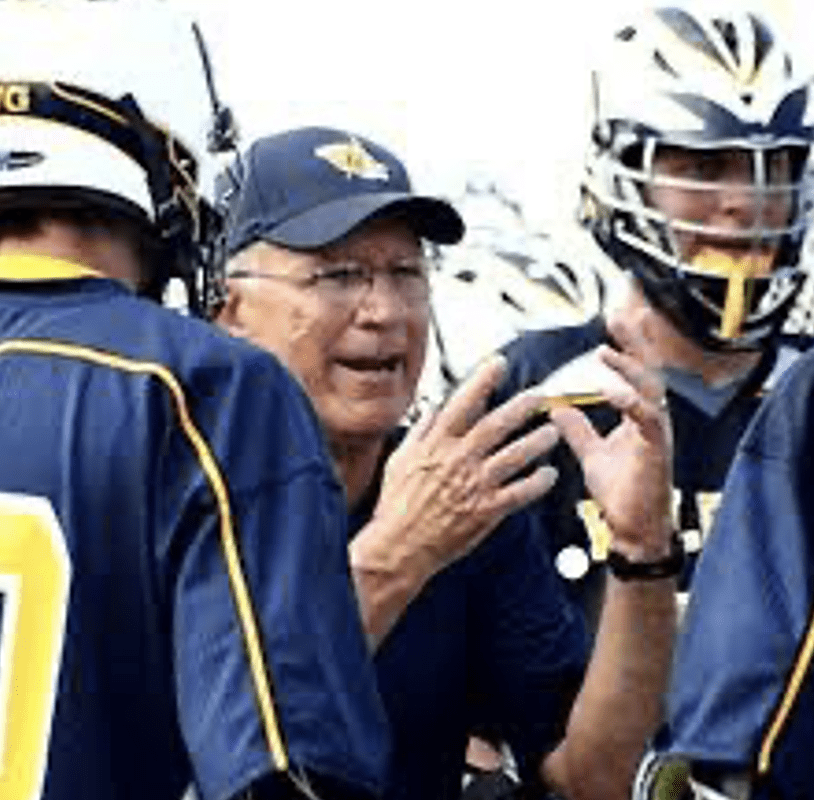 “Of course, they wanted to run off and cry. I told them, ‘You stay there and honor the other team.’ (Discipline) is part of it. That’s why we’ve become so successful. We teach them to be self-disciplined.” – West Genesee High School Head Lacrosse Coach Mike Messere (retired)

Fortunately for me, I worked with Coach Messere for 10 years in the same school system. He was a prince of a man and a great teacher; however, his main interest was instilling values and humility into his players, many of whom landed in the Lacrosse Hall of Fame themselves. Mike Messere wanted his players to be shining examples of behavior and decorum on and off the field. How could one man control a team of 40 rowdy high school boys? What struck me in watching Mike work was how he showed he cared about what his players did both on and off the field. All eyes were on them and their winning record.

The boys might inadvertently start their day off by running into Mr. Messere. In typical Messere fashion, he volunteered to work the “tardy desk” every morning. He took in all the excuses kids gave for being late to school. It didn’t take long for his “boys” to learn that Mr. Messere would know if you came to school late, and he’d hear your excuse, no matter how lame it was. That might mean you had to run hills or run around the high school track holding a tire in each hand. Other ways Mike showed his care for his “boys” was checking on their academics and emphasizing their importance.

Mike’s stated goal was to help every boy on his team get into college with a lacrosse scholarship. So, that meant Mike would come into our classrooms and ask us teachers how his boys were doing, academically and behaviorally. I personally hated to have to report on some of the boys, but there were a few who tried my patience. He prodded me until I gave an honest answer. I knew those boys would be sitting on the bench instead of playing the game even if they were among the best players. For Mike Messere, their attitude, behavior, work ethic, and their values were more important than winning a lacrosse game. And those who sat the game out knew they were hurting their teammates and could have their cost championship team a win.

Mike made his presence known throughout the school day. To lessen the occurrence of incidents, such as fights or bad comportment at lunchtime, Mike again volunteered for cafeteria duty (one I personally tried to avoid). The sight of Coach Messere milling around the cafeteria at lunchtime was enough to keep those feisty teenagers on their best behavior, with good manners and courtesy. Again, the goal was to instill good values into their training. The lacrosse team was the pride of the high school and the community, and Mike wanted to make sure that the boys’ heads wouldn’t swell. He didn’t want any cocky smart-alecs in the mix.

He was not afraid to emphasize discipline in every detail of their lives, calling parents and even girlfriends if he sensed some stress in the boys’ lives.  He was strict, demanding impeccable game uniforms including pulling up the pure white socks they were required to wear. He was also community minded. Every March, at the very beginning of the season, when snow covered the parking lot of the local Catholic Church (just a mile or so down the street from the high school,), Mr. Messere would insist the boys bring a snow shovel to practice. They then would jog down the street to the church parking lot, shovel away the snow and then commence their two-hour practice. When they were done, they’d jog back down the street to the high school, shower change and go home to complete their homework assignments.

To keep those testosterone laden young men modest and humble, several times a season, only after a win, Mike would have the team bus driver pull up to the Onondaga Reservoir and have the whole team run up the steep hill holding the reservoir. These jogs became so legendary, former players would also show up to run to the top of the big hill the reservoir sat on. That was his way of rewarding the boys for winning a game, telling them they did well, they ran off their winning boisterousness. Running up the reservoir hill became a badge of honor and he still expected them to go home and finish all their homework assignments.

Back when I taught with Mike, the team wasn’t allowed to attend their proms. He didn’t want the kids out late, drinking and getting into trouble. He didn’t want them to risk putting a blemish on their reputations or worse by being involved in problematic events originating from one night. In later years, he relented to a certain degree allowing the team to attend proms but calling for practice at 7:30 AM the next day. No one on the team wanted to run hills the day after the prom so they all showed up on time at 7:30 AM.

He watched what they wore to school. He wanted them to live up to a certain image. And embrace that image. One boy (my son) wore a leather band around his neck with studs all the way around it. Mike Messere saw that band and stopped him in the hall. He point blank told him “Danny, my boys don’t wear dog collars”. Needless to say, the “dog collar disappeared, never to be seen again. And as tattoos grew more popular, those were also banned by Mr. Messere. He didn’t like the message they portrayed. Because the team was so successful and had so many wins, he knew the eyes of the entire Syracuse community would be on them. He didn’t want any negative shadow cast on his team, so he enforced his own strict rules of dress and appearance. And all those wins, trophies, state championships and college scholarships served to prove his point.

The leadership lesson we can learn from Coach Messere is simple. Show that you care. Look out for the best path for your team. Reward them for their success. And above all show you love them by looking out for their best interest.

I saw Mike Messere recently. He’s so proud of his former players, the many that became coaches and Hall of Famers. He emphasized that the most important lesson he wanted to impart to his teams was that of the importance of character. He was determined to include character development along with the best lacrosse coaching a kid could get. All those scholarships and awards proved him right.

“He’s the single greatest male role model that I have outside of my own family, He cared about everyone who went through that program. It wasn’t about wins, wasn’t about his own accolades. He invested in each and every young man.” Penn State coach Jeff Tambroni, an ’88 West Genesee graduate.

To read more articles by Mary for RINewsToday go to: https://rinewstoday.com/mary-t-osullivan-msol-pcc-shrm-scp/

Get Mary’s New Book: The Leader You Don’t Want to Be: Transform Your Leadership Style from

Command and Control to Transformational Visionary