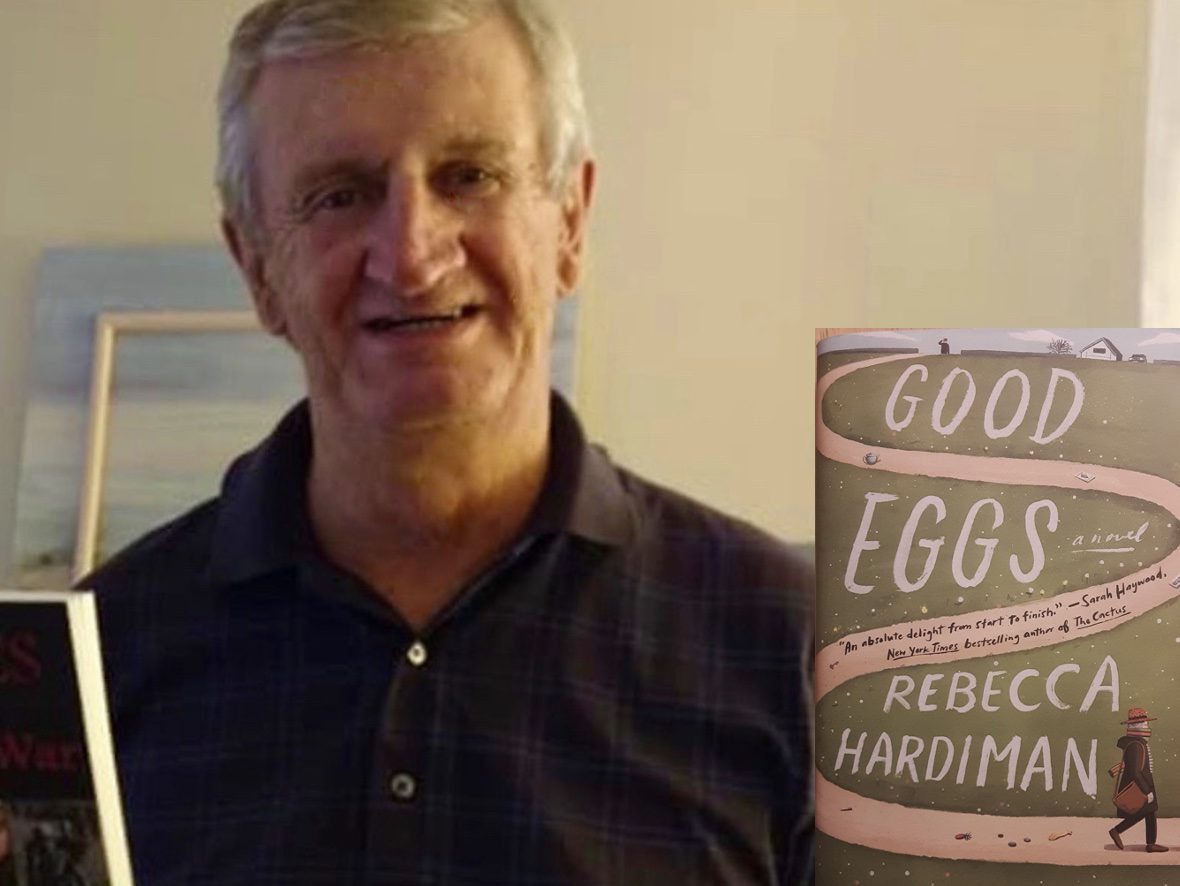 Quirky senior citizens are trending in fiction; Fredrik Backman’s A Man Called Ove and My Grandmother Asked Me To Tell You She’s Sorry, Jess Kidd’s character Cathal Flood in The Hoarder are just two examples.

Debut novelist Rebecca Hardiman adds to this list by creating Millie Gogarty, the cantankerous Irish grandmother in Good Eggs. Residing in Dun Laoghaire, a small town outside of Dublin, Millie, gone past 80 years, has a small shoplifting problem and a thirst for liquor. These may be the least of her idiosyncrasies! Long widowed, Millie traipse around the county in her old Renault getting into mischief and accidents she fears may well give her middle aged son Kevin the excuses he needs to place her in a senior care facility.

Hardiman’s virtuosity is seen in her description of Millie’s response to being caught shoplifting, “Millie assembles her most authentic aw-shucks grin, hoping to emit the picture of a hapless, harmless granny. But her body betrays her: her face boils; pricks of perspiration collect at her hairline. This is the sorry tale of all the oldies, the body incongruent with the still sharp mind – tumors sprouting, bones snapping with a mere slip on ice, a heart just giving up one day, like her Peter’s. Millie’s own heart now knocks so violently, for the second time today, that she has the image of it exploding from her chest and flapping, birdlike, away.”

Millie’s son, Kevin, is in an ever-increasing state of turmoil having been laid off when the Celtic Tiger economic boom collapsed in 2008. His wife has become the breadwinner, often absent on business trips, leaving Kevin to mediate the escalating feud between their twin daughters, Aideen and Nuala. These dizygotic twins were conceived in two eggs and now into their teen years have remained on separate paths. Aideen’s rebellious nature has her father planning on sending her to the Millburn School, a facility known for discipline and structure.

Separated by two generations, Grandmother Millie and Granddaughter Aideen are kindred spirits and both find themselves trapped in soul crushing places; Rossdale Senior Home and the Millburn School for Girls. Their escapes are inevitable, entwined and ripe for adventure and mirth.

Hardiman’s writing has a casual ease which moves the multilayered plots along at a steady pace. There is near infidelity, a dangerous house fire, a larcenous home care helper who fleeces Millie plus Aideen’s first brush with lust and love.

In interviews, Hardiman, who lives in New Jersey, has revealed that she did community service in a nursing home as part of her Catholic high school curriculum and she had also attended a boarding school in Ireland. Her life experiences provided much of the fodder for Good Eggs.

While there are many humorous episodes in this work there are also dark looks at the struggles of life. Kevin, the harried husband and father, at one point silently muses on the state of his marriage, “…he knows that the two of them are held together by a deeply rooted laziness, an abhorrence to having to dismantle their cluttered, complicated household and divvy up all the useless and embarrassing suburban crap they’ve accumulated lo these many years. Laptops, emery boards, teakettles – these cannot possibly be the mortar of a marriage.”

Humor, bonding, separation and resurrection all have their day in this debut work and Hardiman appears to be a talent worth watching.