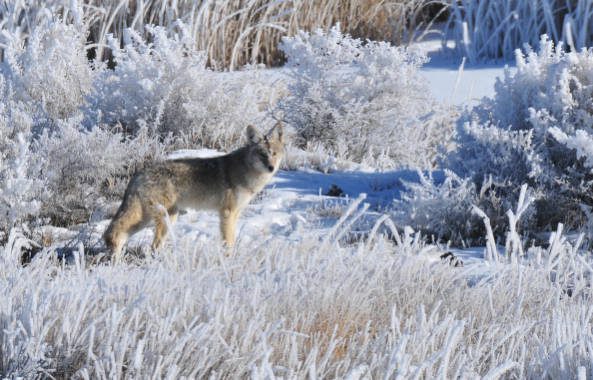 Hunting has been crazy this week for many people. Reports of no birds in Big River, Nicholas Farm, Carolina, and many spots in Arcadia, of all places. Now hunters read my words and embrace the thought: We must start hunting coyotes and fox right now. Right now, as in yesterday!

This writer encountered 4 dead roosters and 4 dead hens in Big River at 7:45 am Wednesday. The roosters were eaten from the backside all the way to half of the breast. The hens were pulled apart.  The entire fields were covered in frost, but the pheasant remains were not so the kills were only an hour or two old. One hunter with a dog shot at another rooster so that left one bird unaccounted for. When one goes to a restaurant these days, a decent entree is in a $25 price range. So, the coyotes and fox had a $200 dollar banquet Wednesday morning.

The RI Dem is doing their job,  it is up to us to eliminate the coyotes. Give some serious consideration to a predator hunt during the afternoon weekdays. Head to an area where there are definite signs of predators. This author still feels coyotes are the primary reason why there are little to no grouse left in Rhode Island.

After leaving Big River in disgust, a trip to Carolina yielded nothing. Same for three locations in Arcadia. The fourth Arcadian spot yielded 3 roosters, and that is when the BS started. Jada put up the first one out of a small shrub and the first shot caught the tail feathers. The second shot yielded a “click”.  “What on earth – a bad primer?” No not at all! The second round was still in the open breach as the spent first casing was stuck in the barrel. First time ever problem with a shotgun that I’ve owned for 30 years. With ammo companies producing ammo 24/7 right now,  quality control and quality assurance may be getting a little overlooked.  A friend’s daughter was having a lot of problems on the trap field with shells lodging in her Ithaca model 37.  Back to the truck Jada and I went as I had a flathead screwdriver in my truck. In my glove compartment it turns out I actually had a Swiss Army knife, too. A Swiss Army knife and come in handy in the field as there are an array of tools on the body that can readily save the hunting trip. That knife is now inside my vest pocket.

While walking back to the truck muttering to myself, and Jada with the “why are we leaving look?” I rounded a bend in the trail and noticed a large collection of rust, copper, reds, blues, greens – full color all in one spot. Then I noticed a snow white ring in the middle of it. It took a second but then it registered that it was a pheasant in vivid colors sunning itself on the edge of the trail. The pheasant looked at me while I was registering what it was, at only eight feet away.  Then the bird exploded into the air with a boom of cackles that sounded more like laughter. The bird knew my shotgun was disabled! Apparently, I offended some deer and other wildlife as they covered the ears of their young ones and yelled at me about my language. Like I said it was a strange day. The Pheasant was beautiful to watch but I could do nothing to bring it down. The bird’s colors were so sharp that this would have been a trophy to put on a pedestal. The one that got away…

After the shotgun was repaired, Jada flushed a third bird but again the bird had the advantage and off it flew. Total time afield was 6.5 hours. If it wasn’t for finding that concentration of pheasants the day would have been a wash out. Numerous reports are coming out of Great Swamp with a large number of hunters doing very well. This writer hasn’t hunted the swamp in 25 years. Let me know how you make out if you make it there this weekend.

The weekend weather is supposed to be very cool and sunny. Enjoy.

To read more articles by Jeff Gross in RINewsToday, go to: https://rinewstoday.com/jeff-gross/