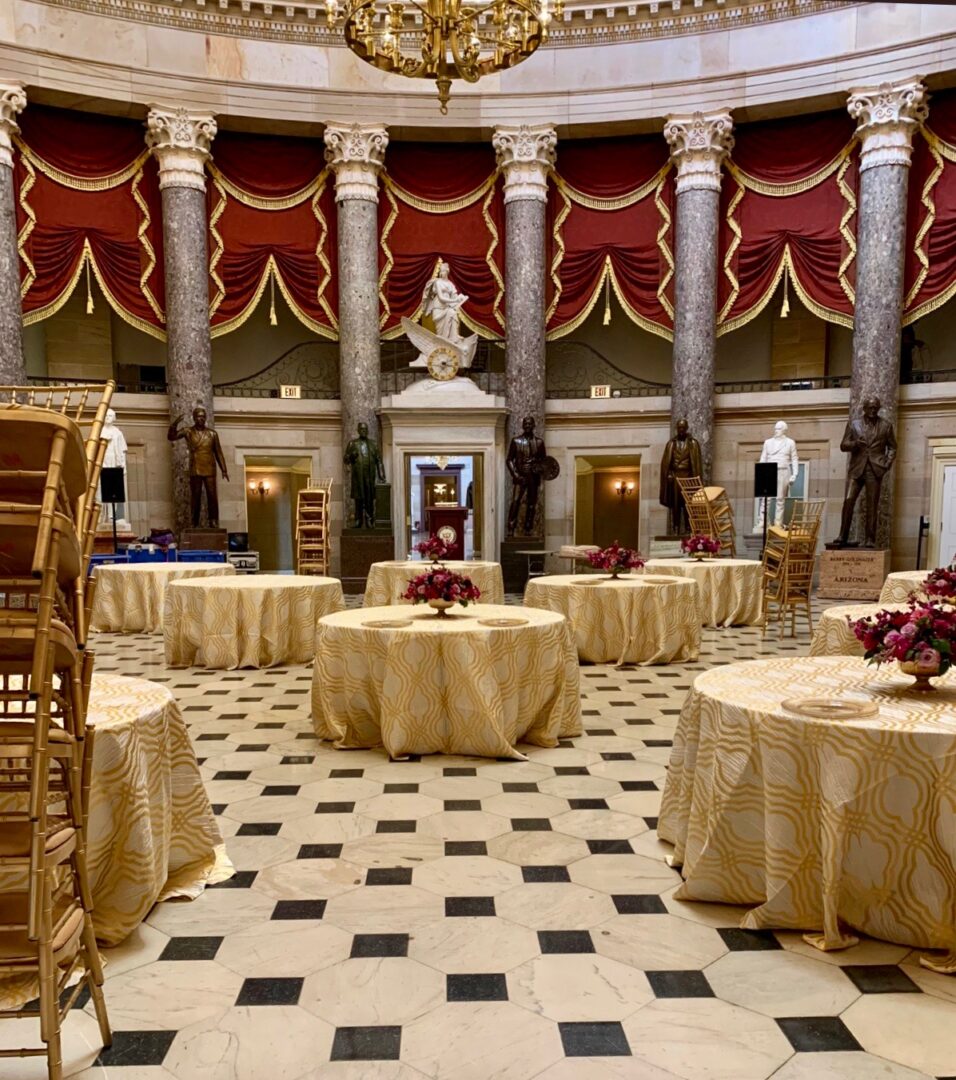 Photo: Last night a dinner in Washington, DC to welcome the new members of the House organized by Speaker Nancy Pelosi. Members traveled to D.C. from across the country this year for orientation. Responding to initial criticsm, Pelosi responded that “it’s very spaced”. After a flurry of additional criticism on social media about how unsafe this was, and coming just before advice for people to cancel Thanksgiving, the format was changed so members could take their meals “to go”.

Justice Alito warns about attacks on religious liberty as lock downs and restrictions go into place in many states and cities.

Over 130 Secret Service officers are in quarantine for exposure to others who tested positive.

Vermont’s Governor has issued an Executive Order closing all bars and restaurants and banning multi-household get togethers of any size. He said, “we’re going to tighten the screws over the next couple of weeks”.

Frog Pond on the Boston Common, will not open for ice-skating this year.

About 60% of pharmacy chains nationwide — Walgreens Boots Alliance, CVS Health, Walmart, Kroger and Costco Wholesale, so far — agreed to partner with the federal government to ramp up access to the new vaccine, HHS announced today.

In Minnesota this fall, masked nurses in traffic vests reached into cars to give passengers flu shots as a way to social distance, but it also served as a test run for a COVID vaccine.

Corey Lewandowski, Pres. Trump advisor, has tested positive for the coronavirus. Lewandowski believes he contracted the virus in Philadelphia, where he has been in recent days to challenge the election outcome, including at the news conference with Rudy Giuliani and Pam Bondi.

The Magh Mela, the annual Hindu pilgrimage to Prayagraj, India, usually attracts around 10 million people. Officials announced last month that it will go ahead as planned this winter – January & March, 2021

Portugal has entered a state of emergency, with curfews imposed in the areas worst hit by the COVID-19 pandemic. From Monday and for at least two weeks, some 7 million people — around 70% of the country’s population — must remain at home on weekdays between 11 p.m. and 5 a.m.. At weekends, they cannot leave home after 1 p.m.

Portugal’s highend leather footwear industry has been hit hard. Normally reserved for big occasions and formal work settings, with many exports, now “there are no nightclubs, no couples going out … all of this means cuts in certain products.”  Some companies have switched to making more comfortable footwear for use around the house or in the supermarket. A few have added masks and other safety equipment to their production lines.

The Bill & Melinda Gates Foundation is putting $70 million more into efforts to develop and widely distribute a Covid-19 vaccine. Fifty million dollars of the new money will go to theCovax Advance Market Commitment, which hopes to amass 2 billion doses by the end of 2021 and send half to the world’s 92 poorest countries. The other $20 million will go to the Coalition for Epidemic Preparedness Innovations, which is co-funding development of several Covid-19 vaccine candidates.

Lack of medical bests in Midwest America is being called “catastrophic” by the Washington Post.

Prepping – the professional approach to stockpiling necessary survival products and items – long considered a fringe activity – is now more mainstream, if on a smaller scale.

Tesla’s Elon Musk tweeted he may have Covid-19 and renewed his conspiratorial posting about the virus that has infected almost 53 million people. “Something extremely bogus is going on…Was tested for COVID four times today. Two tests came back negative, two came back positive.”

Grocery shoppers turning toward premium foods instead of staples – chocolate cake over beans.

President Trump had a news conference to announce an update of Operation Warp Speed. 6 vaccines are on the offing, with 1 ready and 1 just about to be ready. A 5-year process of vaccine development has been done in 6 mos. There is also a distribution system in place, with calls on states to disclose their immunization plans on Monday, at another conference call with Governors. The President noted that New York has opted not to receive the vaccine until they determine that it is ok to give to their citizens.

Bloomberg News has produced a detailed “Inside Operation Warp Speed” article with more information about the need for it, and how it operated to produce a vaccine in six months as opposed to the normal 12-15 year trajectory:

Joe Biden’s Coronavirus Team has now back-tracked their plan to call for a 4-6 week lock down. By January this may not be needed.

First cruises: Despite two negative PCR COVID-19 tests for each passenger prior to boarding, a passenger had tested positive on a less-reliable rapid test, four days into its seven-night voyage from Barbados. Since then, a total of six passengers have tested positive. The ship is currently anchored off Bridgetown as the staff conducts more tests. All 53 passengers are confined to their rooms. The ship has a double capacity of 112 passengers.

East Providence schools: Twitter post: “Students and staff in three of the six grade levels at the center-of-the-city school have been affected by the outbreak, curtailing any chance of allowing in-person instruction to continue at the moment.”

RI State House employees will begin working from home. Speaker Mattiello’s assistant tests positive as well as several other members who work in the state house.

RI Hospital was cited by the RI Dept. of Health for lack of social distancing in its emergency department as the surge was beginning.

Field hospital in Worcester, MA is opening – others around MA are preparing to open.

Christmas at Sturbridge will be held this year, with adaptations beginning Dec. 4th – https://www.osv.org/event/christmas-by-candlelight-2020/

Gov. Raimondo said Convention Center overflow hospital facility has NOT been de-commissioned. However, Lifespan says it is de-commissioned and they will not be involved in opening it.

LaSalette Shrine has announced that for now it has plans to be open for Christmas, beginning on Nov. 26th, with accommodations – https://lasaletteattleboroshrine.org/christmas-festival

New treatments in RI: Monoclonal antibodies (Eli Lilly) by infusion at infusion stations for early cases are being set up by Lifespan. 1 hour infusion – 6 hour observation. Steroids, Remdesivir, etc. are now in their toolboxes.

RI Elective/non-emergency surgeries and procedures are still being accepted – hospitals are making a big point about continuing care, screenings, etc.

MA Gov. Baker will announce plans to reopen COVID-19 field hospitals “in places that will be familiar to people.”

Bill Reynolds, who retired as a full time Providence Journal columnist over a year ago but has continued to write weekly will go to every other week.

Providence Journal editor Rosenberg has announced he will accept a retirement package offered by Gannett, owner of the paper, and will leave on Dec. 1st.

RI Coalition for the Homeless coronavirus report: The month of August saw only 1 case as the state got control over the virus and strict social distancing and cleaning protocols proved effective. September saw no coronavirus cases in our testing. Then, October hit. In a single month there were 34 individual cases (3 staff, 31 clients) across 14 facilities statewide.

From Governor Raimondo regarding testing: everyone in Rhode Island can access your test result by going to portal.ri.gov/results. It doesn’t matter if you scheduled through the state’s portal, if you went through the K-12 system, or if you were tested at a doctor’s office. When you log in, you will go through a two-factor authentication using the phone number or email you provided at the time of your test. Remember, if your results come back positive, immediately isolate yourself and reach out to your close contacts. Don’t wait for a call from the Department of Health to begin this process.