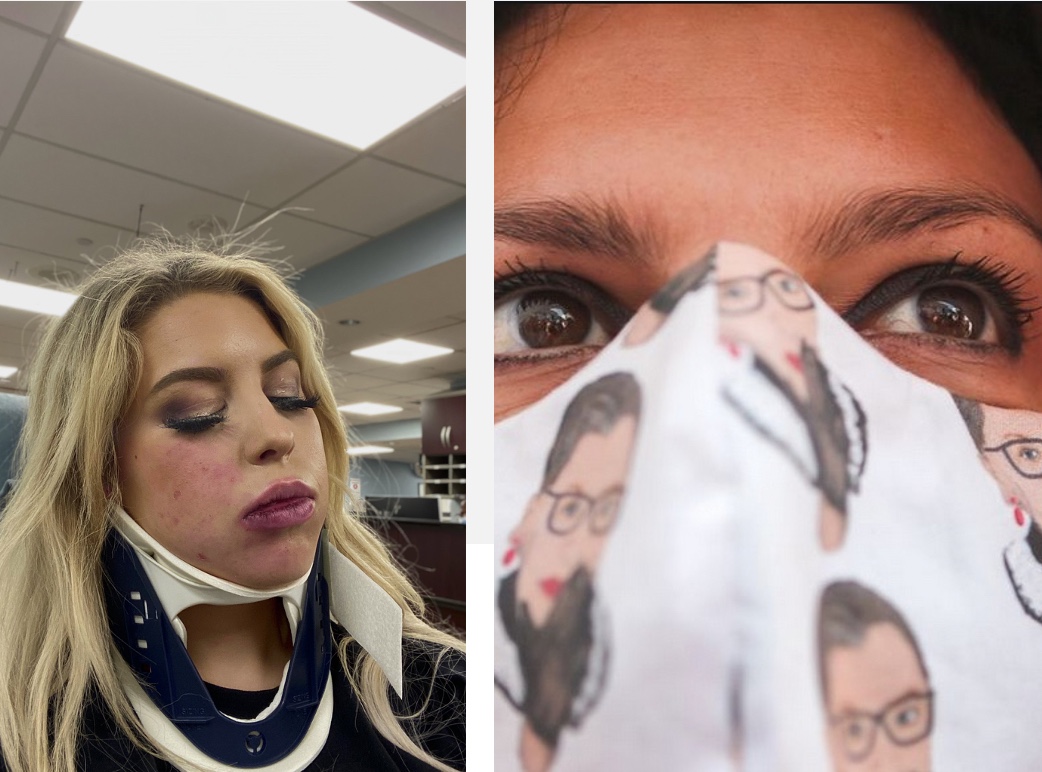 Women on the front lines…

Isabella DeLuca, a young female Trump campaigner in Washington DC was leading a small group of supporters at the Supreme Court building on Saturday to show their support for the nomination of Judge Amy Coney Barrett to the Supreme Court.

Saturday was also the Women’s March on Washington.

Not many police or security were on site when the two groups came close together. DeLuca was holding onto a large, cloth Trump campaign banner, and the women from Saturday’s Women’s March began chanting and moving closer, holding their own signs and posters. Much of their activity could be seen live, on Twitter.

DeLuca, affectionately known as “Barbie”, in the campaign, had a smile on her face while holding the banner. The women in her group occasionally chanted “Four More Years”. DeLuca had helped to organize the day’s event, as part of her work with Turning Point USA.

After a short time, the opposing crowd closed around her. The result was several people attacked DeLuca, choking her, and leaving her in the condition you see here. DeLuca said the first woman who came up to her was a white, older woman with glasses on and a glittery bedazzled Black Lives Matter shirt. “She looked like she could’ve been [the age of] my grandma, honestly.”

She grabbed the banner and when DeLuca tried to take it back the woman punched her and began choking her. DeLuca said she felt reluctant to defend herself due to the advanced age of the woman.

At that moment a much younger female arrived on the scene and joined the older woman attacker – hitting, pushing, and punching DeLuca.

DeLuca was provided medical attention and was subsequently hospitalized. She was put in a cervical collar due to head and neck injuries; had her lips bloodied, and has blurry vision and dizziness.

This year the Women’s March had a central theme of #DefundPolice, noting: “The Women’s March is proud to support The Movement for Black Lives in their call to #DefundPolice. Defunding the police is a feminist issue because black, poor, immigrant and undocumented women are disproportionately targeted, abused and murdered by police. Women’s Marchers across the country are sharing information with their networks as a means to contribute meaningful conversation. This is our small way to channel energy into sustained organizing to bring about the new world we so desperately need.”

The Women’s March, nationally, has seen steadily declining numbers, attributed to in-fighting between different factions of the group. As it began in reaction to the election of Donald Trump to president, it continued this past weekend as a new election is only a few weeks away.

Demonstrators who were with DeLuca said her attackers were with a Black Lives Matter group that had joined up with the Women’s March. Gathered at the Supreme Court were only an estimated few hundred protestors.