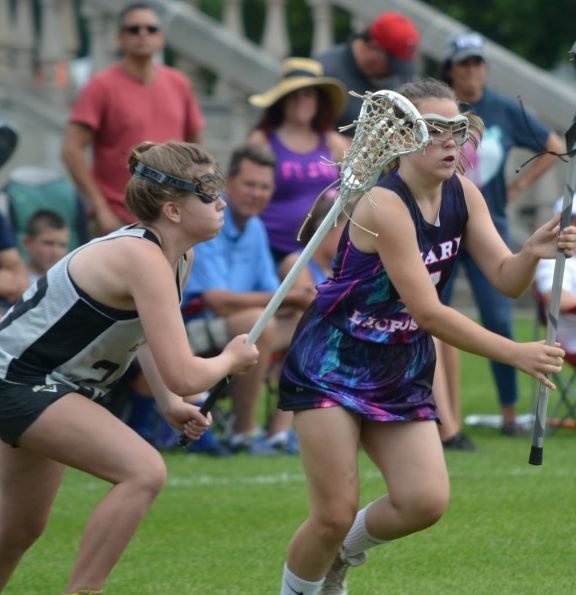 Women have played Lacrosse for over 400 years…

Cross your sticks and jump in, Girls Lacrosse is one of the fastest growing sports in the Country. It began as a fad in this area about 10, maybe 12 years ago. The sport has been played by both men and women in some fashion or other for hundreds of years. Changing and evolving throughout the years. Currently Lacrosse is being played in record numbers across the country. You can find Lacrosse being played in recreation leagues and house leagues, in both high school and college. This “fad” sport is hundreds of years old and has been one sport that women could play since they began playing in the 1600s. For Lacrosse, the sport never looked back.

To understand the sport of Lacrosse, we must look back at its beginning. Lacrosse originally began in 1636 when the Jesuit Missionary Jean de Brebeuf got the ball rolling. The sport was played by both Canadians as well as Native Americans from 1794 to 1867 when Dr. William G. Beers finalized the first set of playing rules. A dentist by trade, Beers used balls made entirely from wood and sticks carved to look like giant spoons. There was no netting, so ball handling was in fact a skill. No protective gear which certainly helped in his dental practice. It is considered an American sport that was invented by American settlers and native Americans.

Games would often last for days, as a means of settling inter-tribe disputes and betting on games was encouraged. In 1867 Queen Victoria watched and endorsed the game, and some said she indulged herself in playing the sport. Scotland became the birthplace of women’s Lacrosse. Early on the girls’ game consisted of the ball being rolled along the ground, but later evolved into an aerial sport. In the early 1800’s it became Canada’s pastime, the rough weather made it impossible to play during the late autumn, winter, and early spring months, so using many of the rules that were established in Lacrosse, the Canadians modified the game to be played on ice and hockey was born. While in the United States, New York became the first state to have a college team establish a lacrosse team. So, in other words – we didn’t start the fire.

As the men became established in the sport, the ladies were not very far behind; in 1890 the first Women’s lacrosse game was played in St. Andrews Scotland, and you thought the St. Andrews is only known for golf. In 1904 and 1908 Lacrosse was included in the Olympics but dropped, yet it continued to be a sport in the World Games. In 1926 Rosabelle Sinclair established women’s lacrosse in the United States and is considered the mother of women’s lacrosse in America. She started a school team in Baltimore, Maryland. The first United States Women’s Lacrosse Association is formed in 1931 and women’s rules for the game were created. Two years later in Greenwich, Connecticut the first women’s National Championship Tournament is played. In 1971 the NCAA offered Lacrosse as a varsity sport, but in 1982 the first ever NCAA Women’s National Championship is played between UMASS and Trenton State. From 1990 to the present, Women’s Lacrosse has made its way to the World Stage, winning Federation and World Cups.

In the last 10 years Lacrosse locally has begun a grassroots effort to offer the sport to girls at the youngest of age, and Women’s Lacrosse has become the fastest growing sport in the country.

Thanks go out to Kerri Kelleher who began Flare Lacrosse. Rhode Island is right up there leading the pack! “The need for services for young women has skyrocketed over the past few years,” said Kelleher, who has been coaching youth sports for 10 years. “As a Mom I watch and coached my own children in playing sports and I have seen a dramatic jump and changes in young women’s athletics in recent years. “Pointing out that friendships, school, home, and preteen to age ten have a profound effect on young women. As a high school Lacrosse coach at the Rocky Hill School, Kelleher realized that being successful on the athletic field, the girls need to be supported in their daily lives. “I am committed to having lacrosse and sports as an outlet and safe place for the players as they discover new things and develop their skills and becoming their best selves. ” If you go onto the Flare Lacrosse website their mission statement says it all. Watching Kelleher conduct practices and games and listen to her speak to the girls, it is obvious that she fully believes in the positive approach.

Her instructions to the players were much like every pro player, corrections were pointed out in a positive light and support for each of the players was refreshing. Kelleher points out that Flare Lacrosse is committed to the development of strong girls/women athletes. “We understand that what happens off the field is just as important as what happens on the field. Our model focuses on friendship, kindness and supporting each other to build a stronger young woman, both inside and out.”

Kelleher points out that to start to play Lacrosse doesn’t cost a lot of money, “All you need to get started is the player needs a stick, mouth guard and protective goggles. Cleats are suggested for outdoor play while sneakers or rubber sole athletic shoes are fine for indoors. “When asked about helmets and other protective padding, her response was, “rules prohibit sticks from entering a protective zone around the head, and goggles and mouth guards usually do the trick in the girls/women’s game. Player contact is not allowed, but it does happen. You would be amazed that in the female players game there is very little stick related injuries. The players all seem to abide by an unwritten code and if they are coached properly there are no issues. Although Women’s Lacrosse has been around for hundreds of years, the resurgent of young girls and women has happened only in the last dozen, and each year the sport is growing in record pace bringing in record numbers or participants. Schools and Colleges offer Lacrosse as a scholarship varsity sport, at the high school level female athletes are being drawn into this “new” sport and on the youth level, organizations such as Flare are popping up throughout the country and are creating youth programs that rival AAU and the Premier youth leagues in all sports and soon may take over those other sports.

If you are interested in Flare Lacrosse and would like more information about either girls Lacrosse or Flare Lacrosse, please go to www.flarelacrosse.com or go check out a live game on Sundays from 11 am to 1pm at Teamwork’s on Jefferson Blvd, in Warwick Rhode Island.