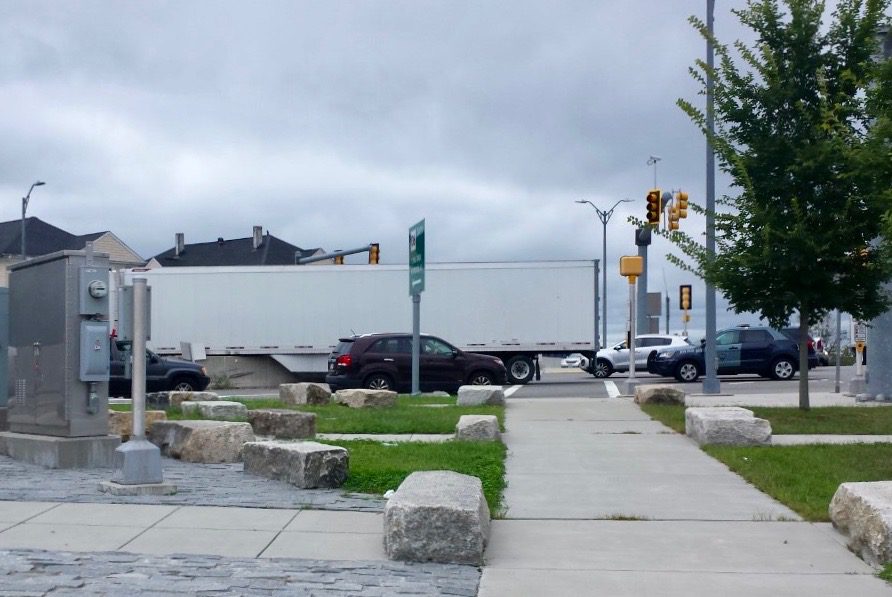 “How’s my driving?” Let them know…

In a day where motorists are an ever dangerous threat on the roads, and we wake up to daily – and nightly – horrific accident reports –  now truck drivers, always thought of in the past as the safest drivers on the road,  are crossing the line.

About a month ago I was on Route 95 South in West Greenwich and had an eighteen wheeler pass me in the brake down lane. I was upset at my brush with what would have been a terrible accident. I was also concerned about this dangerous driver on the road, when I called the company listed on the truck cab but received no answer.

I started conducting some research. Good truck drivers are now hard to find and as a result some trucking companies may be decreasing their basic qualifications to recruit more. (See Picture.)

A brief conversation with a Massachusetts State Police DOT trooper gave me some insight. He noted that some of the truck drivers cannot speak English (one wonders about reading signs and rules). Some truck drivers are under the influence of marijuana. Even though cannabis is legal in Massachusetts, operating while “under the influence” of any substance is not. Bothersome facts to know while you are on the road.

While there are state to state differences in getting a commercial truck driving license, there are certain federal guidelines that must be adhered to. Here is one regarding language:  “Can read and speak the English language sufficiently to converse with the general public, to understand highway traffic signs and signals in the English language, to respond to official inquiries, and to make entries on reports and records”. In some cases, training can be conducted multi-lingually, but passing the test must be done in English to drive on roads in the US.

One week ago while returning from Boston on Route 24 I was harassed by an 18 wheel tanker carrying 10K gallons of fuel oil. The harassment started when the tanker driver failed to yield on the on ramp to Route 24 in the Brockton area. The driver forced his way on to Route 24 and I was stuck between him and the car next to me so I to jack-up to avoid getting crushed. He knew I was there as I was right outside his cab window.

Think of the number of casualties that would have resulted if an accident had occurred? At that moment Route 24 was full of heavy rush hour traffic. I had enough. I looked for the phone number on the side of the tanker, and I called the company and asked for the “Safety Department”.

A company’s  safety department handles all the safety violations inside a business and outside as well. A safety department only answers to the CEO and the insurance company. It is has the authority to immediately terminate an employee for hazardous behavior.

Getting back to the Route 24 incident I left a voicemail for the Safety Officer. Thirty minutes went by and I called back and the receptionist was trying to blow me off. Not taking no for an answer, and having experienced staff who answer the phones covering for dysfunctional employees, I asked how I can talk to the Safety Officer right – NOW. She took my number and with five minutes the Safety Officer called.

The Safety officer was upset that this driver was acting this way with a loaded tanker and I mentioned that if the driver worked for me he would be in the unemployment line. The Safety Officer assured me the driver would be severely dealt with. You may think this is harsh but what if the driver endangered your son or your daughter, your spouse?

The Monday before this past Thanksgiving I encountered another oil company driver driving erratically on Route 95 South in Cranston. This truck was a repair vehicle. The driver was committing lane violations as he was all over the road forcing me out of my lane twice. I came around him and saw that he was on his cell phone as the phone was in front of his face obscuring his line of sight with the highway.

Since the oil company had their name on the truck I googled the company name and contacted their safety department. The same conversation as the Route 24 incident occurred with the Safety Officer being very apologetic about the hazardous driving and thanks to their companies GPS system the driver will be quickly identified and dealt with.

In both incidents I provided the truck number but the companies use their GPS systems for concrete evidence. Again, you may think this harsh but what if this reckless driver crashed into your loved one 2 days before Thanksgiving?

We cannot do much to remove the reckless motorists on the roads these days, even though if we see autos driving in dangerous ways we should call it in at once, at least we have the ability to do something about the 6 ton to 80 ton trucks on the road driven by a few reckless drivers. And that is to turn them into their companies Safety Department. Note the number on the side of the truck.

According to the Embark Safety website, “About 5% of drivers develop unsafe driving patterns that potentially put themselves and others at-risk”. Embark Safety was the company that started the national program, “1-800-How’s My Driving Program”. The company says this campaign allows organizations of all sizes to mitigate accident risk by leveraging comments from concerned motorists to identify risky driving behaviors and reduce the likelihood of accidents.

So, next time, look for that number, and when you can safely stop and call, do it. Point of note: if a truck driver is severely out of control on the highway then call 911 and let the State Police deal with them.