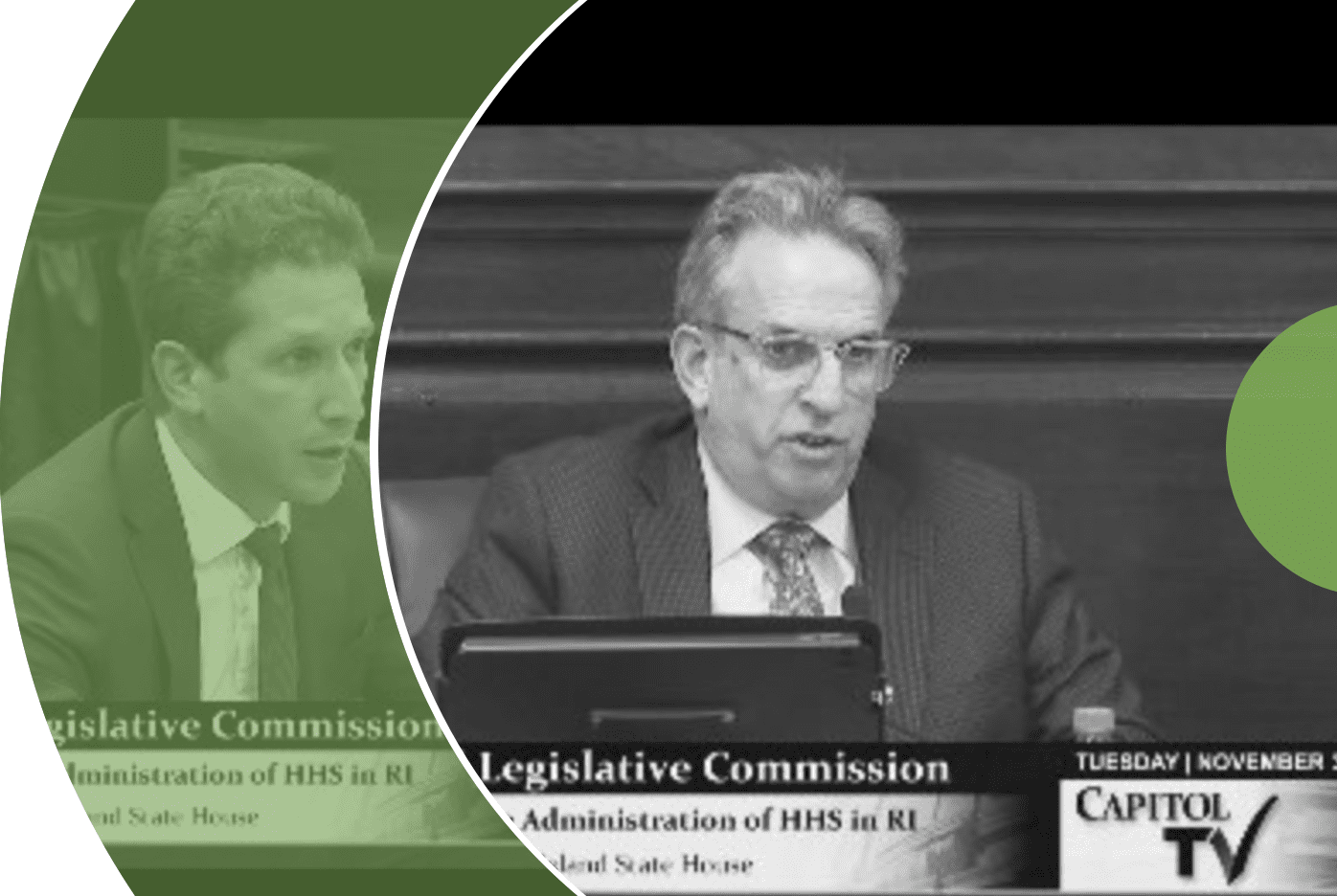 Publisher’s Note: We start at the end of a four part series – see links, below for first 3 parts

New information comes to light about the failure to use fee for service rates for residential treatment providers, even after a waiver was granted

The back-and-forth between Sen. Josh Miller and outgoing R.I. Medicaid Director Ben Shaffer had the feel of watching two professional boxers trade punches and jabs during a 10-round bout that lasted nearly three hours.

What was at stake was not a championship belt or a trophy but the future of how health care is delivered to one-third of all Rhode Islanders. It was a fight that had escaped the attention of most of the news media in Rhode Island.

In PART One, ConvergenceRI detailed the valiant efforts by Miller to pin Shaffer into his corner and get him to provide answers about the importance and value of legislative intervention to achieve the higher rates of reimbursements through Medicaid, a principal reason why so much of the health care delivery system in Rhode Island is in disarray.

For the most part, Shaffer bobbed and weaved and successfully evaded getting hit by a knockout punch,

In PART Two, ConvergenceRI set the stage for the context and conflict behind the fight – about who will control the destiny of where Medicaid program is located in the future. Will the Medicaid program stay under the umbrella of the Secretariat at R.I. Executive Office of Health and Human Services?Or, will it move to a new home at a proposed health finance authority?

The battle between Sen. Miller and Director Shaffer also epitomized the conflict between those who defend the slower process of preserving the status quo and those who are demanding that the system make changes – which often results in uncomfortable conversations about racial equity being held. Politics is still the art of who gets what, when and how.

In PART Three, ConvergenceRI attempted to illustrate the long-term problems being faced by Medicaid, beyond the urgent crises precipitated by low reimbursement rates around Early Intervention, the lack of access to residential treatment centers for young girls, the flooding of hospitals with behavioral health patients because of the lack of outpatient community providers, caused in large part by low reimbursement rates, and the ongoing emergency in dental health because many dentists are refusing to take on Medicaid patients because the rates are too low.

The continued inability of Director Shaffer to give any answers to the questions asked by Commission members demonstrated a mixture of hubris and arrogance that seemed to devalue the expertise that legislators and agency CEOS brought to the table – as if they would never be recognized as equal partners in a relationship.

Now, in PART Four, ConvergenceRi had planned to illustrate the continuing “disconnect” between Medcaid services and rates with the inability of the agency to take corrective action to increase reimbursements.

But a source shared a document that forced ConvergenceRI to change gears and, in part, halt the recount of the blow-by-blow fight between Sen. Miller and Director Shaffer – or at least put a whole different spin on it.

The document appeared to be a fragment from ongoing budget deliberations by the McKee administration and R.I. EOHHS to correct and reform billing practices for substance use disorder residential treatment services. It appeared to indicate that the agency had potentially been engaged in questionable billing practices.

To put the importance of the document into context, one of the more serious situations brought about by Medicaid’s failure to reimburse community-based agencies for their services occurred with the lack of any residential treatment facilities for teenage girls and young women in Rhode Island.

As Sen. Miller described it at the Nov. 30 hearing, in his verbal battle with Director Shaffer, Sen. Miller said: “You [Shaffer] said that you do have the authority to raise Medicaid rates on a temporary basis or on an emergency basis, but that has never been done. What kind of threshold would create that [need]? And, do you think, in retrospect, it should be used more often? When you don’t have [substance use disorder] residential care for teenagers, should you raise the rates, as an example?

Can you spell “disconnect?”
The extended dialogue between Sen. Miller and Director Shaffer captured the “disconnect” in a profound fashion.

SHAFFER: To my knowledge, it has not been done. I think the statutory [guidance] is quite clear. That is not necessarily a shared interpretation, and I would say, to make that clearer in terms of what constitutes a [reason] to raise the rates in a certain budget situation, without a certain threshold… I just want to be clear, again, in a full discussion, whether it is for existing rates and services or the creation of a new program physically not covered under…

MILLER: [interrupting] To have a service that went out of business because the rates were too low, to have it exist again, would we consider raising the rates?

MILLER: [interrupting] Is closure a threshold that should be met?

SHAFFER: It depends on how many other providers are in that particular system, [whether] it is a “break glass” in terms of an emergency kind of situation.

MILLER: Zero services? Is that a threshold?

SHAFFER: Zero services is certainly a threshold. I am not sure what services you are referring to.

MILLER: There are no current providers for residential services for teenage girls in the state.

SHAFFER: I think the answer to that is that we are actively working on, in this particular case, we are [seeking] to add new services.

MILLER: It is also a budget item; it is multiple times more expensive [to place patients] in hospitals, rather than if the Medicaid reimbursement rates supported [outpatient] providers.

And, inversely, those of us who are trying to legislate around the procurement over managed care organizations, their reimbursement takes over 90 days for a vulnerable provider to get reimbursed for services. Because there are so many examples, during and post-COVID, where those services are falling apart. [The example of] the lack of accessibility of residential care for teenage girls has been used a lot by this Commission.

How long do we have to hear from providers, or to hear from patients, that they don’t have access to services because the Medicaid rate is too low.

a. BHDDH Block Grant
• Current: Three providers receive $94.80 per day per resident from a BHDDH Block Grant to accommodate individuals who are uninsured, underinsured, and IMDs that cannot bill Medicaid FFS [fee for service]. It appears that these providers serve clients receiving ASAM 3.3 and 3.5.

[Editor’s Note: ASAM stands for the American Society of Addiction Medicine and the numbers, 3.3 and 3.5, refer to clinical criteria for assessment of the condition. The current rate of reimbursement for private residential treatment providers is roughly $180ish per day per resident for 3.1, and $250ish for 3.5, according to a recovery community expert.]

• Reform: Shift block grant expenditures to either FFS or MCO payment in SFY 22, and then in SFY 23 raise the rate to match appropriate ASAM payment level so EOHHS knows precisely what treatment services are provided.

• Historical Context to Block Grant billing:
1. Around 2019, RI was approved for a SUD IMD Waiver, which then allowed SUD IMD facilities to bill FFS Medicaid Unfortunately, the State has never transitioned the IMD providers to FFS billing, instead covering them under BHDDH’s SA block grant.

The response of one community agency director, upon reading this shared fragment of an apparent budget document, was: “Good God.”

In an attempt to verify the authenticity of the fragment of this apparent budget proposal, ConvergenceRI reached out to Yvette Mendez, chief of staff for Secretary Jones at R.I. EOHHS, and to Kerri White, the communications director for the agency, providing them with the paragraph about the “Historical Context to Block Grant billing,” asking them to confirm or deny the accuracy of the document.

White was out of the office, so the email was forwarded to Ashley O’Shea, who then forwarded it to Ryan Erickson, the chief of staff for BHDDH Director Richard Charest.

In turn, O’Shea asked ConvergenceRI to share with her the actual document, which ConvergenceRI refused to do, so as to protect the source.

ConvergenceRI asked that a response be provided by noon on Sunday, Dec. 5. No response was received.

The “actionable” information contained in the apparent fragment of the budget proposal, in ConvergenceRI’s reading of it, is the fact that for two years, even after having been granted a waiver to bill Medicaid fee for service to pay for residential treatment, EOHHS [or BHDDH] apparently failed to do so, instead relying on funding the BHHDH block grant, apparently from federal SAMHSA funding.

Some questions to ask: Why did R.I. EOHHS fail to use Medicaid fee-for-service payments to reimburse residential treatment providers even after having received a waiver to do so? Who at R.I. EOHHS was responsible for making that decision? When did this discrepancy first come to light? Was it part of the information revealed in the investigations looking at Eleanor Slater Hospital? Why were substance use disorder residential treatment providers kept in the dark about this snafu?

And, finally, why has R.I. EOHHS failed to respond to ConvergenceRI’s request for verification of the authenticity of the document. Apparently, the fragment was shared with a number of other news organizations, too.

Read all stories by Asinof for RINewsToday, here: