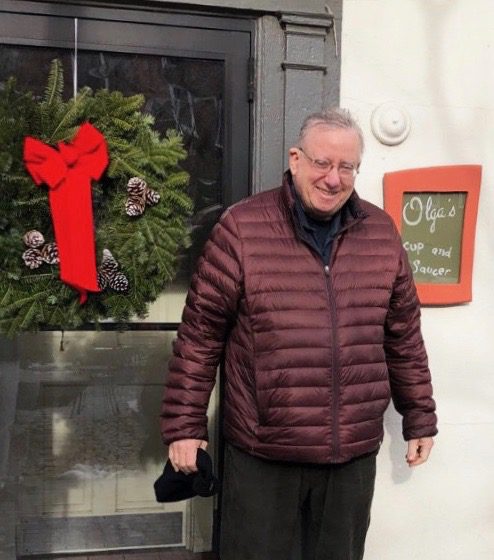 What happens when a hub of innovation goes dark?

After a run of more than two decades, Olga’s Cup + Saucer will close its doors on Dec. 24

The quirky sign by the door, showing the hours of operation, was a throwback to the origins of the eatery in Little Compton more than two decades ago, where the enterprising roadside bakery adjacent to Walker’s Farm would advertise when it was open and when it closed, with a sign using images of a cup and saucer, one ready to receive a beverage, the other not. [See second image.] The iconic images actually became the thread of a local advertising firm’s memorable rant on creativity in the 1990s.

For my family, the roadside establishment became a regular pit stop on the way to the Little Compton Town Beach during the summer, where we feasted on a delightful fresh corn and pesto pizza, prepared in the small kitchen, before enjoying a late evening at the beach.

When Olga’s Cup + Saucer migrated to its site in the former Jewelry District in Providence, opening a year-round establishment, the quirkiness remained, as Olga Bravo ran the kitchen and Becky Wagner, her partner, created an outdoor garden oasis. It cultivated a loyal customer base as well as a dedicated staff.

When ConvergenceRI launched in September of 2013, Olga’s served as my impromptu office, where meetings, interviews, and conversations frequently took place, where interruptions were welcomed, and where new connections were made.

That fall, when Rhode Island’s new health insurance exchange was first launched under the Affordable Care Act, Olga’s Cup + Saucer was featured in an advertising campaign to promote the exchange, and ConvergenceRI followed the adventures of Evan McKay, a 29-year-old manager at Olga’s, signing up for health insurance for the first time. [See links below to ConvergenceRI stories, “Shopping on the exchange,” “A not so excellent adventure,” and “Exchange creates new team approach for small business.”

Two years ago, Olga and Becky sold the café to new owners. As reported in ConvergenceRI: “Olga’s Cup + Saucer has been sold to new owners as of Dec. 1, 2017. The café, restaurant, garden oasis and innovation hub in Providence, had been the passionate enterprise of Olga Bravo and Becky Wagner. Olga’s had migrated from Little Compton in the space adjoining Walker’s Farm more than two decades ago. Since it began publication in 2013, the preferred “office space” to conduct interviews, engage in conversations, and practice the art of convergence had been Olga’s.”

A recent visit
During a recent visit to Olga’s, I met up with WPRO’s Steve Klamkin, for a cup of coffee and conversation.

And, as usual, I bumped into a frequent source, who thanked me for my recent interview with R.I. Attorney General Peter Neronha, which she called insightful.

The staff at Olga’s said they were saddened at the closing and the loss of jobs – and even though Seven Stars is reported to have plans to use the current location for a new site, it was too far into the future for current staff to hope to find a job there, according to one staff person.

Reflections
Perhaps it was Steve Klamkin’s influence, but the song that has kept playing in my head for the last few days was a Woody Guthrie ballad, “So long, it’s been good to know yuh,” about the way that the dust storms in the Midwest during the 1930s, what Guthrie called “this dusty old dust,” had created a migration to the West Coast during the Depression, and, as Guthrie sang, “I got to be moving along.” [See link to YouTube video below.] It became one of the signature songs of The Weavers.

What Olga’s represented, for me, was a welcoming hub of serendipity and innovation, where conversation flowed easily, and there was a value of welcoming inclusiveness. It promoted a human scale of design, once championed by the likes of Jane Jacobs, where interactions and collisions were part of the belonging to a neighborhood of sorts.

A number of different people emailed me and texted me to ask if I was in mourning, given my predilection for Olga’s. The answer is no. What Olga’s captured for me was a wonderful era of creativity and innovation in Rhode Island. Those forces have not disappeared, they are still ever-present, and they will always find a new home where inclusiveness and diversity and conversation – and good coffee – are welcome. It is a renewable resource.