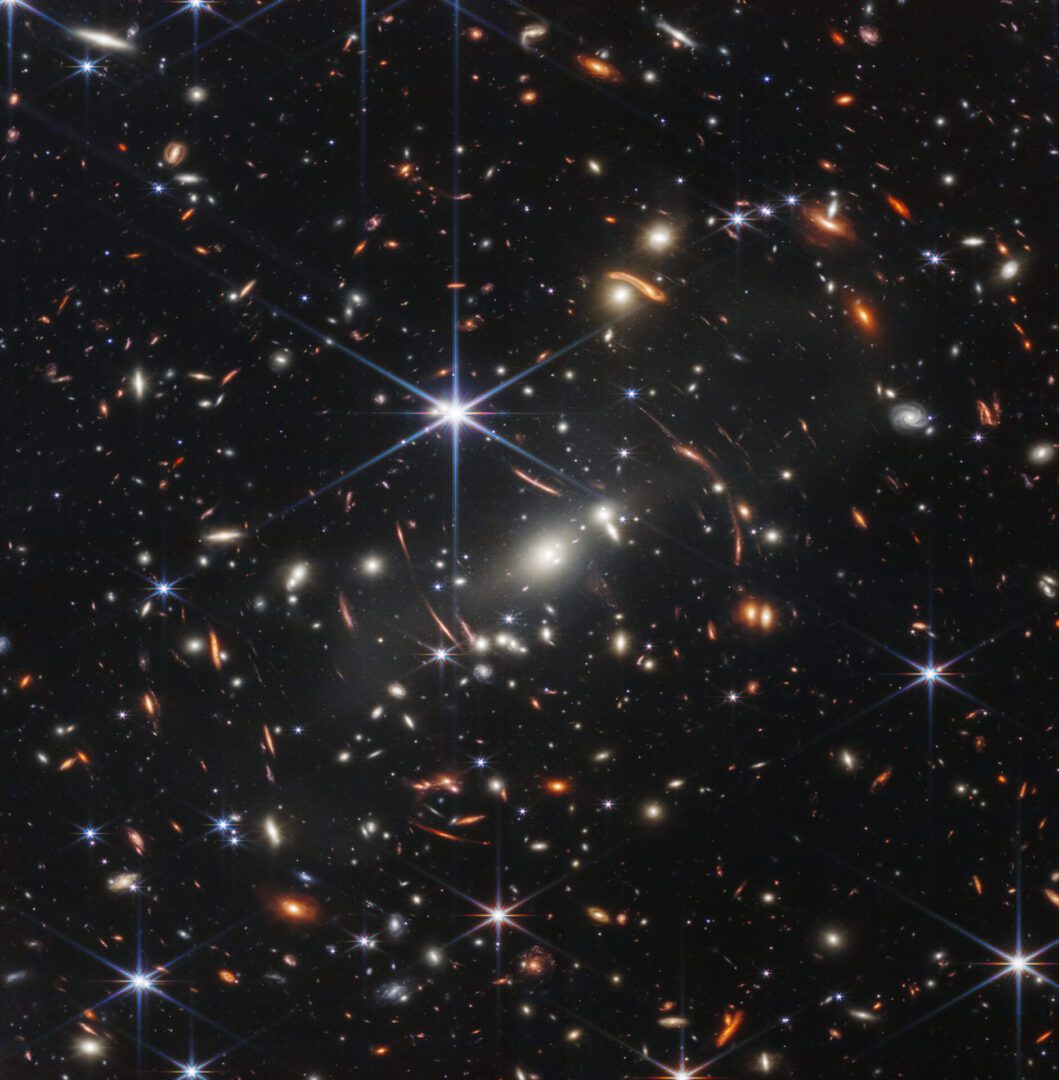 At 10:30am TODAY, images from the Webb Telescope will be released – NASA released a teaser with the image at the top of this story – the first ever seen so deep into the universe. The light is refracting from 13 billion years ago. Released one by one, the first images from the world’s largest and most powerful space telescope will demonstrate Webb at its full power, ready to begin its mission to unfold the infrared universe.

NASA’s James Webb Space Telescope has produced the deepest and sharpest infrared image of the distant universe to date. Known as Webb’s First Deep Field, this image of galaxy cluster SMACS 0723 is overflowing with detail.

Thousands of galaxies – including the faintest objects ever observed in the infrared – have appeared in Webb’s view for the first time. This slice of the vast universe is approximately the size of a grain of sand held at arm’s length by someone on the ground.

The image shows the galaxy cluster SMACS 0723 as it appeared 4.6 billion years ago. The combined mass of this galaxy cluster acts as a gravitational lens, magnifying much more distant galaxies behind it. Webb’s NIRCam has brought those distant galaxies into sharp focus – they have tiny, faint structures that have never been seen before, including star clusters and diffuse features. Researchers will soon begin to learn more about the galaxies’ masses, ages, histories, and compositions, as Webb seeks the earliest galaxies in the universe.

“Scientists are thrilled that Webb is alive and as powerful as we hoped, far beyond Hubble, and that it survived all hazards to be our golden eye in the sky,” said John Mather, Webb senior project scientist at NASA’s Goddard Space Flight Center in Greenbelt, Maryland. “What happened after the big bang? How did the expanding universe cool down and make black holes and galaxies and stars and planets and people? Astronomers see everything twice: first with pictures, and then with imagination and calculation. But there’s something out there that we’ve never imagined, and I will be as amazed as you are when we find it.”

The James Webb Space Telescope is the world’s premier space science observatory. Webb will solve mysteries in our solar system, look beyond to distant worlds around other stars, and probe the mysterious structures and origins of our universe and our place in it. Webb launched Dec. 25, 2021, on an Ariane 5 rocket from Europe’s Spaceport in French Guiana, South America. After completing a complex deployment sequence in space, Webb underwent months of commissioning where its mirrors were aligned, and its instruments were prepared for science.

The James Webb Space Telescope is the world’s premier space science observatory. Webb will solve mysteries in our solar system, look beyond to distant worlds around other stars, and probe the mysterious structures and origins of our universe and our place in it. Webb is an international program led by NASA with its partners, ESA (European Space Agency) and CSA (Canadian Space Agency).