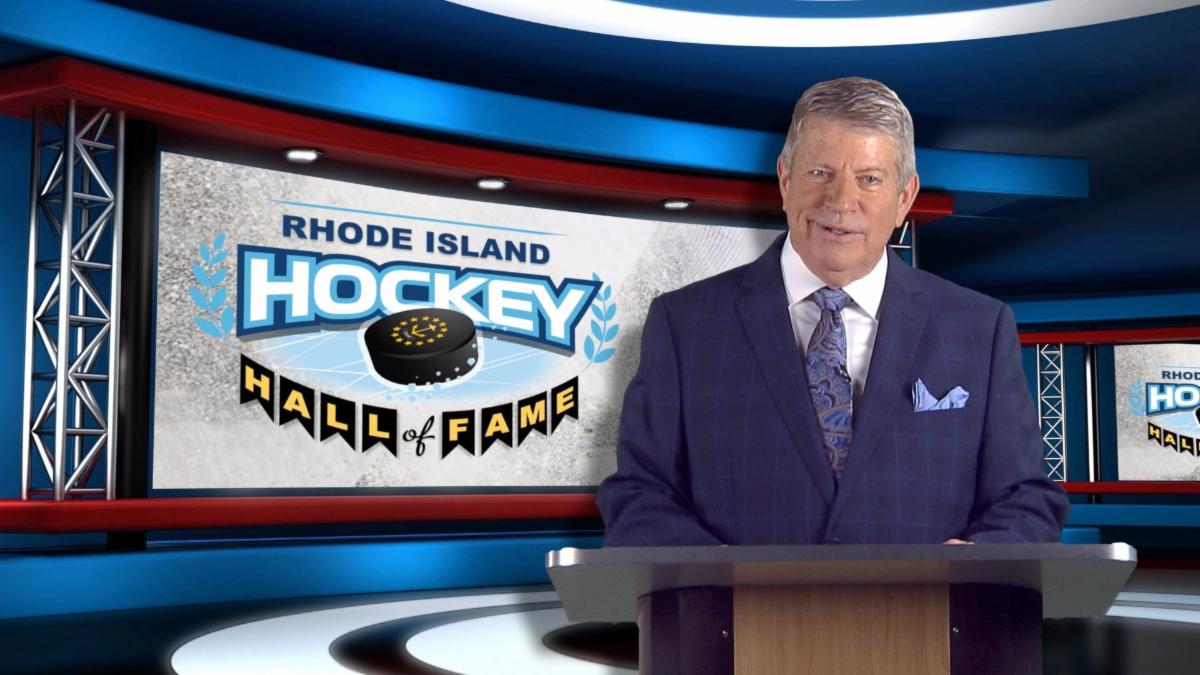 The RI Hockey Hall of Fame

The RI Hockey Hall of Fame enshrinement of its Classes of 2020 & 2021 was broadcast on WSBE TV36 this past Saturday. The 1½-hour special, hosted by Dale Arnold, will be re-broadcast several times on WSBE and the WSBE “Learn Channel”. The easiest way to watch it is to go to the website – RIHHOF.com

The safely pre-recorded TV Enshrinement Special was produced in lieu of the previously scheduled in-person induction events postponed by the pandemic.

“We’ve been working on this production since February,” noted Hall of Fame chairman, Vincent Cimini. “Inductee acceptance speeches have been taped from all over the country at venues associated with each inductee’s hockey career.” Along with videos capturing the highlights of each inductee’s hockey journey, congratulatory messages from past enshrinees and some of the game’s most famous personalities were featured in the program.

Cimini also noted that camera-phone videos from family, friends and fans had been collected over the past four months to allow them to be part of the celebration as part of a custom audience created for each inductee.

In a special tribute, Sylvester “Buster” Clegg was awarded the 2020 Malcolm Greene Chace Memorial Trophy. Buster Clegg has had a connection to the game of hockey in Rhode Island for most of his life and the connection has touched all levels of the sport. Born April 21, 1937, he was raised in Burrillville, R.I., when that town was a hotbed of hockey – especially at the high school level. Clegg learned to skate and play the game as a kid on the town’s landmark Granite Pond and eventually became a regular on defense for the high school team coached by the legendary Tom Eccleston. Read more about Buster Clegg here.

Inducted into the University of Maine Athletic Hall of Fame in 2008, and the Mount St. Charles Hall of Fame in 2016, Dave was born in Warwick in 1968 and raised in Cranston. A 1986 graduate of Mount St. Charles, he was a two-time All-Stater at the Mount before accepting a scholarship to play what would be one of the greatest careers of any who have skated for the University of Maine or played in Hockey East. http://www.rihhof.com/dave-capuano/

Inducted into the Boston University Athletic Hall of Fame in 1982, and born in Providence in 1944 in Providence, Jack starred in the long line of All-State goaltenders at LaSalle Academy. His play, including an All-New England nod, earned him a scholarship at collegiate powerhouse, Boston University. He played under Jack Kelly and was part of the Hall-of-Fame coach’s first recruiting class at BU. http://www.rihhof.com/jack-ferreira/

Inducted into the RI Interscholastic League Hall of Fame in 2015, Paul Guay was born in Providence in 1963 and raised in Woonsocket. He developed his hockey talents playing in the various youth hockey programs in northern Rhode Island.

Paul’s passion for the game blossomed when his father, the team physician for Mount St. Charles, began taking him to games at Adelard Arena There he fell in love with the pageantry surrounding Mount hockey. He would later star in that arena, earn All-State honors, and be recruited to play for Lou Lamoriello at Providence College. http://www.rihhof.com/paul-guay/

Inducted into the University of Maine Athletics Hall of Fame in 2007 and the Mount St. Charles Hall of Fame in 2012, Garth Snow was born in 1969 in nearby Wrentham, MA. Garth was drafted out of Mount St. Charles in 1987 by the Quebec Nordiques. During his junior and senior years at Mount St Charles, his team went 50-7-1 while capturing 2 RI state crowns and 2 national championships. http://www.rihhof.com/garth-snow/

Inducted into the Rhode Island Reds Hall of Fame in 1964, George Army is a “Class of 1964” inductee into the RI Reds Hall of Fame. The Reds’ iconic and revered trainer from 1934 to 1969, George had the longest tenure of any individual associated with the team. http://www.rihhof.com/george-army/

Inducted into the RI Heritage Hall of Fame in 1964 and the Brown University Hall of Fame in 1978, Bob Gaudreau is a two-time college All-American, born in Providence in 1944. He grew up next door to the RI Auditorium where he had access to rink rat ice time and witness to the play of the great pros who played there. And he made good use of both. http://www.rihhof.com/robert-r-bob-gaudreau/

Inducted into the Charter Class of the RI Reds Hall of Fame in 1963, Art Lesieur is a Providence Reds legend. With a French name, his skillful blueline play, and his rights owned by the Montreal Canadiens, local fans assumed he was Canadian. On the contrary, he was born just a few minutes away in Fall River, MA, in 1907 and would later live his entire adult life in Rhode Island. http://www.rihhof.com/joseph-arthur-art-lesieur/

David was born in Cranston in 1966, developing his hockey skills in the CLCF and the Johnston youth league, where he captained USA Hockey’s National Bantam Champions in 1981. He played his high school hockey at the Kent School in Connecticut, where he was a 2-year captain and team MVP. Highly touted, Dave was the first-round pick of the Minnesota North Stars in the 1984 NHL Entry Draft. Despite his high draft position, he opted to play collegiately for Boston University rather than turn professional. http://www.rihhof.com/david-quinn/

The Hall of Fame Medallion

As a means to celebrate our state’s rich hockey history, the RI Hockey Hall of Fame seeks to link the past to the present whenever the opportunity arises. Such was the case in determining the form and presentation of our unique Hall of Fame trophy, which is modeled after the bronze medallion originally created for the RI Reds Hall of Fame in the early 1960’s.

About the Rhode Island Hockey Hall of Fame

The Rhode Island Hockey Hall of Fame is a non-profit organization formed in September of 2016. It is a collaboration of two well-established entities with longstanding contributions to hockey’s growth and the best interests of players, coaches, officials, and fans in Rhode Island—RI Hockey, Inc. and the RI Reds Heritage Society.

RI Hockey, Inc., the local chapter of USA Hockey, represents all of the youth leagues in Rhode Island. USA Hockey is recognized by the International Olympic Committee as the governing body for organized amateur ice hockey in the United States and a member of the International Hockey Federation.

RI Hockey represents the more than 4,000 registered youth hockey players engaged in our community youth leagues throughout the state, as well as hundreds of adult players, coaches, and officials.

RI Reds Heritage Society is a partner in this Rhode Island Hockey Hall of Fame endeavor. The mission of the RI Reds Heritage Society is to preserve the history and memory of the RI Reds, the genesis of hockey’s immense popularity and growth in Rhode Island. With a membership of nearly 700, the Society hosts an annual player reunion, publishes a quarterly newsletter, and maintains an exhibit of the team’s colorful history at the Dunkin’ Donuts Civic Center, heir to the RI Auditorium, the birthplace of professional hockey in our state.