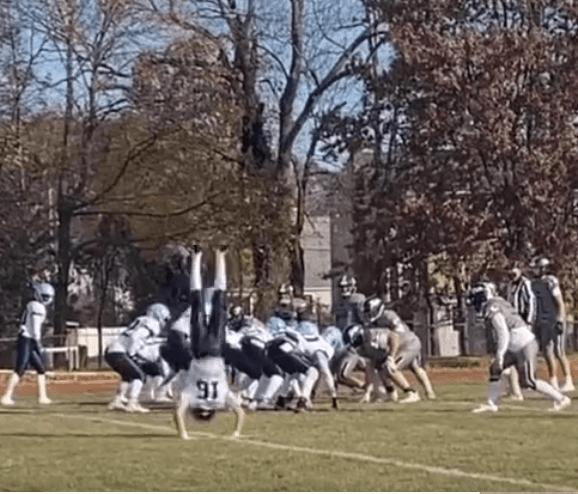 Thanksgiving is a time for all of us to give thanks, for us to share our blessings with others and be grateful for what we have. In these times, this sentiment rings louder as we carry on with a sense of normalcy after the last couple of years of uncertainty. Thanksgiving is the time for football! Not just the professional ranks or the college level but it is the time where the high school teams take center stage. Rivalries old and new rekindle and for that game, no matter what each teams’ records are at the time, everything comes down to the turkey day game!

For the Panthers of Johnston and the Patriots of Pilgrim it looked for a while that 2021 was the year that there wouldn’t be any Thanksgiving Day game for either team. Pilgrim’s opponent was sidelined because of injuries and a Covid outbreak. Pilgrim itself was close to an outbreak of its own, but after the team and coaching staff were tested and cleared to play, the team found itself without an opponent. Johnston found themselves in a similar situation, however, it wasn’t injuries or Covid that derailed their annual Thanksgiving Day date, their opponent had opted out of the game.

This left each team looking for a “Turkey Day” opponent to play. Each team continued the routine of practice with the hope that a team, any team, would answer the call. Pilgrim parent and team supporter Sean Rainey said, “For most of these players, playing their last game of their high school careers is the highlight that they will always remember.” So, the word got out that Johnston was without an opponent as well. “We were going through our usual practice schedule, not knowing if we would have anyone to play on Thanksgiving, but we were keeping our fingers crossed,” said Johnston’s longtime coach, Joe Acciardo. “Then the call came from our Athletic Director Keith Cory asking if we would be interested in playing Pilgrim on Thanksgiving? We didn’t have to think twice, the answer was yes!” These two teams play in the same division during the season and Pilgrim had beaten Johnston 14-0. This had the making of a whole new rivalry.

This was going to end up being a game that will eternally be remembered for one play. A play that will be played over again by those in the news media who happened to be there and captured something that anyone ever seen in any football game-ever! This one play would go viral and make it to the national media level. This single play will have anyone who watched it, ask themselves “did I just see this….?”

In Johnston’s first drive of the game, the ball was on the Pilgrim’s one yard line. “The play was called a Quarterback Sneak Flip Special.” Acciardo said. “A lone running back was in the backfield along with a wide receiver who went in motion to the right side of the field. This is not an unusual play”. But it would turn out to be the most talked about play in recent Rhode Island high school football history, because as the running back, who happen to be Joe Acciardo Jr. went into motion, he began to do several front, off the ground forward somersault flips and back handsprings and finishing with a round off back tuck, toward the sideline.

You can hear Joey’s mom, Jo-Ann Fontaine, exclaim her OMG at her son’s completion, as she films this:

The Pilgrim defense watching this amazing fete failed to respond to the Panther Quarterback Hunter Remington, for an easy touchdown. “It was one of those ‘well that’s something that you don’t see every day’ moments. That had everyone’s attention and the touchdown was scored pretty much without notice.” Acciardo said. “We had practiced it a few times during the season, but it never worked so we never used it until that moment, and it went off perfectly.”

The proud father said that “Joe Acciardo Jr. was always into “hip-hop’ since he was very little, an accomplished dancer, he has appeared in several on stage with Justin Bieber and has performed on the television show The World of Dance hosted by Jennifer Lopez, and has performed on a Macy’s day parade on the float with Jimmy Fallon and the Roots. The younger Acciardo would like to make dancing a career either as a performer or a choreographer. He is looking to go to college out west to study, play football, or pursue his dream in the entertainment industry.

As for the game, Johnston avenged the earlier loss by winning the game 29-12. But the real winners were both teams – they played their last high school game on Thanksgiving; in front of their family and friends and talks of making this Turkey game an annual event. Plus, everyone who witnessed the “Quarterback Sneak Flip Special Play” are now the first to say, you won’t believe the play that I saw! Because in a few days the world will see it! What a way to start an annual rivalry!