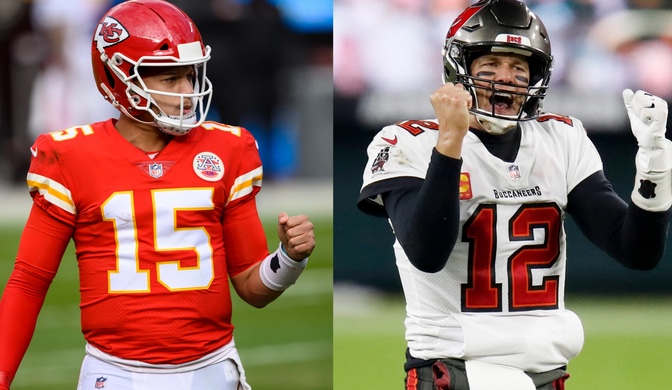 The Super Bowl – just what the country needs during a year that no one will ever forget. But – this event will be remembered for many things other than the pandemic.

Yes, here we are again, Super Bowl weekend. Where something old is new again and something new is trying to move into the neighborhood. The something old? Tom Brady of course! Timeless Tom is playing in his 10th Super Bowl, but this time he is with a new team, the Tampa Bay Buccaneers, after leading the New England Patriots to 9 Super Bowl appearances. He’s in a new league, switching to the NFC after playing 20 years in the AFC, but he is getting the same results. The new? Patrick Mahomes. Playing in his second consecutive Super Bowl while trying to lead the Kansas City Chiefs to the leagues first back-to-back Super Bowl championship since Tom Brady did when he was the quarterback of the New England Patriots.

The last time the New England faithful saw Tom Brady was after getting knocked out of last year’s play-offs and heading into free agency. Many did not believe that he would do anything else but re-sign with the Patriots, a team that he was drafted by; a team that he turned into Super Bowl champions; and a team that he became a legend for, earning him the nick name “The G.O.A.T. (the Greatest of All Time).

As events played out, Tom wanted out of New England. Speculation was running rampant, from that he and Head Coach Bill Belichick grew tired of each other, to the franchise was ready to move on and rebuild, to that Brady wanted out of New England and he and his wife Giselle Bundchen wanted to go to a warmer climate and to a situation where he would be appreciated. And that place turned out to be Tampa Bay, Florida.

Patrick Mahomes was the new face of the up-and-coming NFL. Young and charismatic with a style all his own. On the field he found creative ways to win football games. He was the whole package, he had confidence like Brady, a calm demeanor like Joe Montana, he was a risk taker like Brett Favre, with a toughness like Terry Bradshaw.

Mahomes lead Kansas City to their 3rd ever Super Bowl appearance and came out as Super Bowl champions. This season seemed to be an extension of last season as Kansas City took control of their division early, and seemingly with ease making it to the Super Bowl; now as the defending champions.

The season itself is going to go down in history, playing and entire NFL schedule amid a global pandemic that saw extraordinarily little, but a few, bumps along the season. Another interesting twist, when the schedule makers selected Tampa Bay James Robbie Stadium as the host site of the 55th Super Bowl, they had no idea that this would be the first time ever that the hometown team will be playing in their home stadium in the Super Bowl. It will be the first time that the usual Super Bowl fans will not be attending in person. After getting last season’s Super Bowl game off just as the Coronavirus hit the country hard. A lot of things have changed in the past year. Reduced capacity, or in some cases, no fans, were allowed into many stadiums. This forced many fans to view their favorite teams on television. For the Super Bowl only 25% of the stadium’s capacity will be allowed to attend the game.

The halftime event will feature musical performer “The Weekend” to perform to a much smaller crowd. But in spite of what adjustments the pandemic forced upon us the bottom line is that the Super Bowl and NFL will conclude the season with a dream matchup, which translates to huge ratings. Considering all the hurdles and obstacles and odds of reaching this point seems unbelievable, but to have the match-up between Kansas City and Tampa Bay (the last time they played each other earlier this season the Chiefs beat Tampa Bay by 3 points), Mahomes verses Brady, Kansas City the number one seed when the playoffs began and was the favorite to get to the big game, barring a major upset and the Buccaneers who was the sentimental favorite by going into the playoffs as the number 5 seed, traveled to every game as they upset every home team along the way.

As the New England fans have witnessed for twenty years, Tom Brady and his pals Ron Gronkowski and Antonio Brown (who followed Brady to Tampa Bay), delivered the NFC championship to Tampa in the most improbable Super Bowl match up ever witnessed in the NFL so far.

So, who is going to win? I guess you will just have to tune in to find out, but one thing is for certain, this could be one of the most watched, most entertaining Super Bowls.