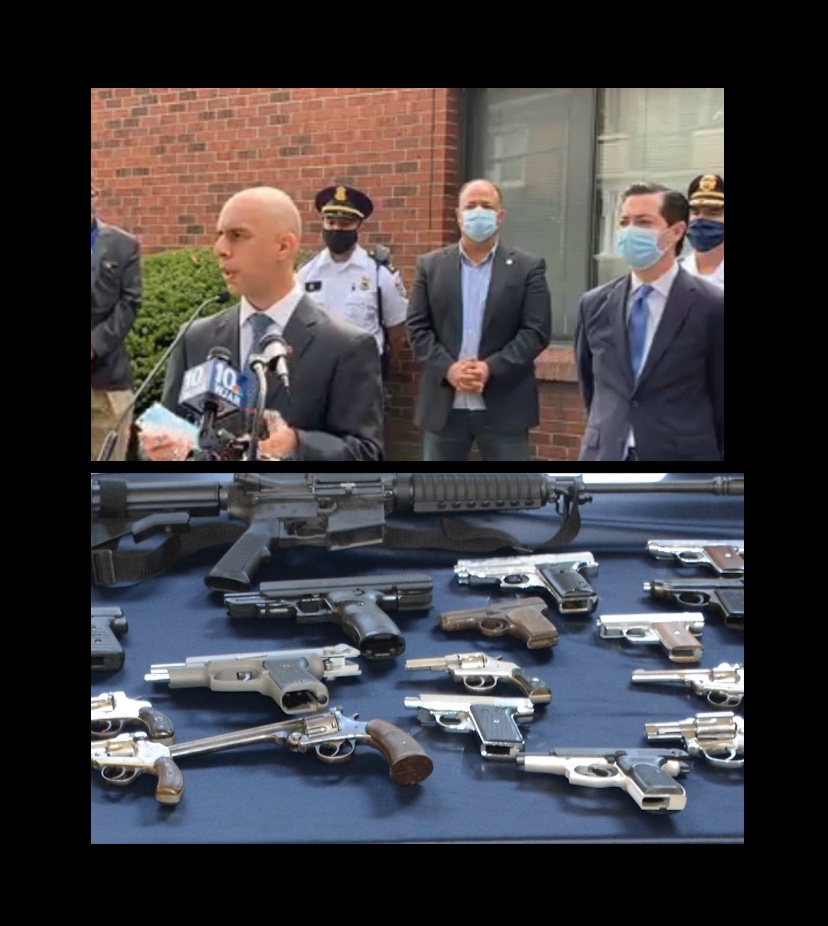 Several Rhode Island legislators are questioning the wisdom behind the “Gun-Buyback” initiative that was announced last month by Mayor Jorge Elorza of Providence and Mayor James Diossa of Central Falls.

They (listed below) issued a press release yesterday:

“The buyback event is scheduled for October 17th and has received statewide criticism from a broad spectrum of individuals, advocacy groups and the Providence Fraternal Order of Police (FOP).  Talk radio station WPRO spent hours on this topic last week and the reaction was overwhelmingly negative.

The joint press release from Mayors Elorza and Diossa states that “firearms will be accepted anonymously and with amnesty for possession, will not be tested for ongoing cases and will be destroyed at the end of the buyback program.”

“The very notion that we are allowing criminals – and let’s not mince words, if you are in possession of a stolen handgun, you are committing multiple felonies – to simply hand over a stolen firearm with no questions asked is ludicrous,” said Representative Sherry Roberts.

“Over the past 10 years, Providence Police have successfully removed over 1,100 firearms from the streets in their normal course of duty,” said Representative Justin Price. “The ability to run the serial number of those firearms and conduct tests for fingerprints, DNA and ballistics has led to the resolution of not just the crime of possession, but linked those firearms to multiple other crimes across the state and the nation. To destroy that evidence – with no questions asked, is an extraordinary approach to law enforcement that frankly goes against best practices in forensic science when solving crimes.”

In an interview on WPRO, Michael Imondi, President of the FOP was extremely critical of this program. Imondi stated that “these programs are largely ineffective… the last program in 2017 retrieved zero firearms…Out of the last three buybacks, only one was successful and that was in the late 90’s.” Imondi went on further to state “the fingerprints and ballistic information is the most crucial information in not just solving those crimes, but in the prosecution of criminals.”

“Mayor Elorza’s ongoing displays of contempt for our law enforcement officers is further demonstrated by this program,” states Representative Michael Chippendale.  “I had a firearm stolen from my factory in Providence in 2007. Two years later, that firearm was recovered in Central Falls and the DNA evidence allowed the police to prosecute and resolve several other felonies. My property—the firearm, worth over $700, was returned to me at the end of the investigation. As if the morale of our law enforcement officers wasn’t low enough, now they have to do their job knowing that the Mayor is essentially handing out exonerations for serious felonies committed with a firearm.”

“This is nothing more than hypocrisy.” said Senator Gordon Rogers. “Last year we passed two laws banning ‘3D guns’ and so-called ‘ghost guns’ because, as we heard from law enforcement and the anti-2nd Amendment lobby, ‘they are untraceable and crimes cannot be solved.’ Now we’re going to actually pay people money to destroy evidence in the same types of crimes? It’s not the gun that was involved in a crime that they destroy, it’s also the case against a criminal, who was just handed a free-pass, along with a Visa card for $500.”

“Imagine a street criminal –who has committed several felonies, including murder with a firearm –that is given an opportunity to anonymously turn in that same firearm, without investigation, and on top of it, receives a $500 Visa card,” said Senator Jessica de la Cruz. “That criminal just eliminated the chance of being prosecuted for those past crimes, while also receiving a Visa card worth enough money to go buy another firearm off the street and continue their crime spree.  I can’t possibly imagine who would think this is a good idea.”

“The way I interpret our statutes, and based on the Mayors’ press release,” said Representative David Place, “this entire program is a violation of our RI General Law 11-47-22 which states, in part, ‘…The officer who takes custody of the firearm shall promptly ascertain, using available record keeping systems …whether the firearm has been reported stolen and if stolen shall notify the reporting law enforcement agency of the recovery of said firearm. If the police department … has not been notified by a justice of the superior court or the attorney general that the firearm is necessary as evidence … it shall be returned to the lawful owner.’ And I would expect our public safety officials to be aware of this legal requirement. This illegal event needs to be canceled immediately.”

“Each year an onslaught of legislation seeking to destroy the 2nd Amendment is introduced,” said Senator Elaine Morgan. “Republican legislators, as well as 2nd Amendment advocates, continually point out that the overwhelming majority of firearms violations are either pled away or dropped outright during prosecution. It is argued that members of our General Assembly are more obsessed in the firearm itself, than in the criminal who uses the firearm with malicious intent.”

Representatives Chippendale, Place, Roberts and Price, along with Senators Rogers, de la Cruz and Morgan, believe that the money allocated for this ill-conceived program would be better spent by investing it in law enforcement initiatives, or firearm education initiatives in our schools, that will help youngsters understand the dangers and potential illegalities of possessing and using firearms.