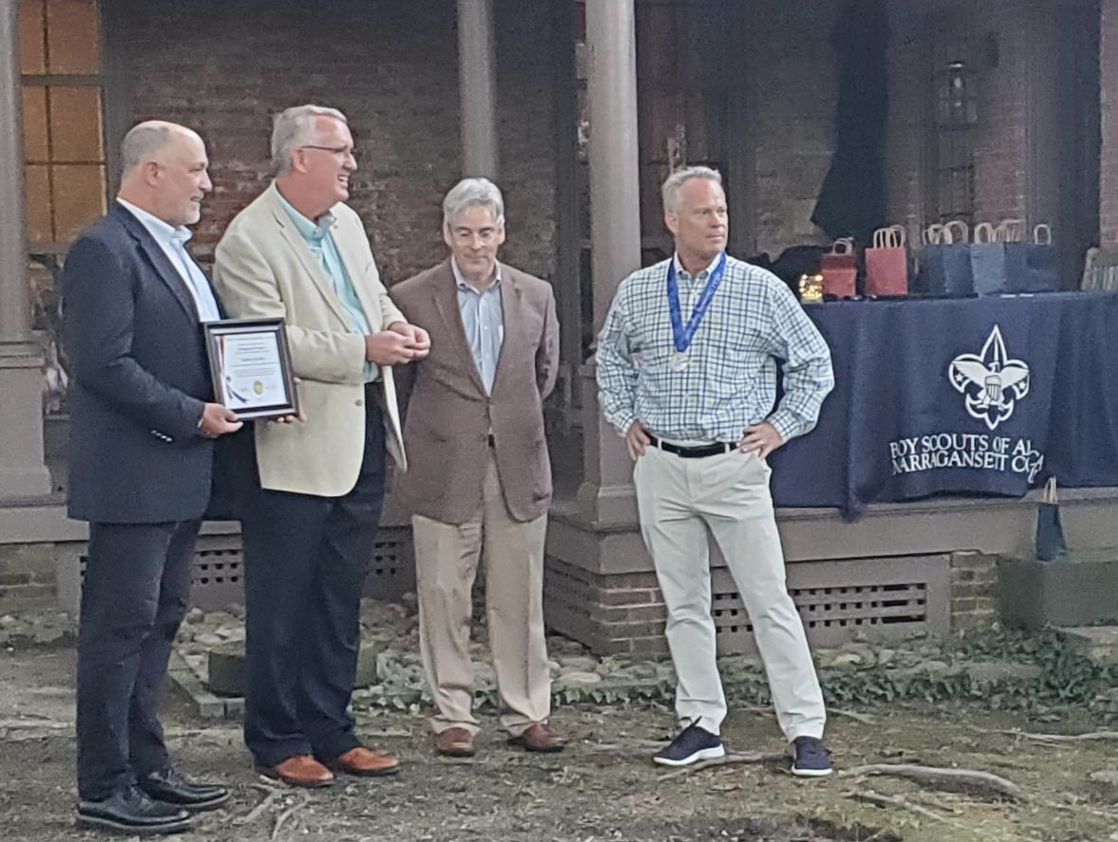 NOESA was established during the Boy Scouts of America’s 100th Anniversary in 2010. The award was created to recognize notable Eagle Scouts who had performed distinguished service at the local, state, or regional level. Often, worthy candidates for the NOESA have inspired others through their actions and have devoted a lifetime to their professions, avocations and communities.

Tom Parrish, an Eagle Scout from Michigan, is known locally for building Trinity Repertory Company into a profitable and popular theater company. During Parish’s five years as Executive Director, Trinity Rep has broken a 55-year historic sales record twice for the highest grossing production, they also grew ticket sales by 32% and strengthened their partnership with Brown University to offer a tuition free Master of Fine Arts program that ranks in the top 5 in the world.

Fred Schultz, an Eagle Scout from Troop 4 Barrington in the Class of 1961, has a long history in Scouting. Schultz is a Camp Yawgoog alumni, where he camped as a kid and worked for nine years on staff, his last as Sandy Beach Waterfront Director in 1968. Schultz also has the distinction of being the first ever Scoutmaster for the Counselor in Training (CIT) program and was Chief of Wincheck Lodge for 2 years when the first area conference was held at Yawgoog Scout Reservation.

Schultz displayed the life-saving skills taught in Scouting in September 2020 when he saved a fisherman from potential drowning outside his house in Charleston, RI.

Steve Tortolani is an Eagle Scout from Troop 2 Barrington and the Class of 1976. After studying economics at Denison University and graduating in 1984, Tortolani started in software sales. In 1993 Tortolani and two partners launched LighthouseMD, which provided software solutions to physician practices across the United States. In 2007, Tortolani and his partners sold LighthouseMD to Optuminsight, Inc. (a subsidy of United Health Group – a Fortune 500 provider of insurance, health care products, and technology). Tortolani is an active member of the Rhode Island community, supporting numerous charitable causes. Tortolani is the former Narragansett Council Community Fundraising Chair and former Council Executive Committee Member.

Tortolani is the son of an Eagle Scout, and a father of two sons and one daughter, both his sons are Eagle Scouts from Troop 2 Barrington.  Learn more about the National Outstanding Eagle Scout Award by clicking here.

About the Narragansett Council:The Narragansett Council, Boy Scouts of America’s mission is to serve others by helping to instill values in young people and, in other ways, prepare them to make ethical choices over their lifetime in achieving their full potential. The Narragansett Council’s research-backed, youth development programs are for boys and girls ages 6 to 20 through Cub Scouts, Scouts BSA, Venturing and Exploring. The council serves 7,000 youth in Rhode Island, Southeastern Massachusetts, and Pawcatuck, Connecticut. People can learn about Scouting programs and find groups near them at www.BeAScout.org. For more information, please log on to www.ncbsa.org or visit on Facebook.