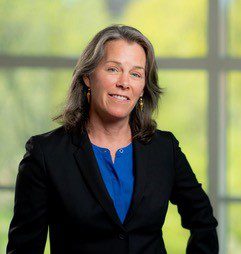 Anya Rader Wallack is returning to Vermont after a six-year stint in Rhode Island; she offers her astute insights on the state of the health care industry

Rhode Island is losing one of its more valuable players in the public health arena, with the departure of Anya Rader Wallack, Ph.D., Professor of the Practice at the Center for Evidence Synthesis in Health at the School of Public Health at Brown University. She has been named senior vice president for Strategic Communications at the University of Vermont Health Network in Vermont, beginning July 15.

Rader Wallack had been a key participant in ongoing efforts to implement health care reform in Rhode Island. Those included: structuring an individual insurance market under the Affordable Care Act; working to implement an accountable entity system of value-based care with R.I. Medicaid; and stepping in to serve as interim Secretary at R.I. EOHHS, following the botched rollout of the Unified Health Infrastructure Project [UHIP] and the subsequent resignation of former R.I. EOHHS Secretary Elizabeth Roberts.

In her work at the School of Public Health at Brown University, Rader Wallack has been involved in developing a series of groundbreaking data analytics, using the state’s All Payer Claims Database to identify trends in increasing medical costs.

Before coming to Rhode Island, Rader Wallack had been involved in Vermont’s failed efforts to create a single-payer plan in the Green Mountain State.

ConvergenceRI has conducted numerous interviews with Rader Wallack over the last six years, always impressed by her ability to engage in a robust, give-and-take on health policy issues.

“The health system is not geared toward including patients in decision-making,” Rader Wallack said, in a response to a question about the communications skills often found to be lacking in health care, and why patients’ voices are often not heard. “Some clinicians are really good at it, but too often patients give up their agency to physicians,” she continued. “Few people would be willing to let a personal shopper buy all of their clothes, or a realtor buy their house for them, but we essentially let physicians make our health care purchasing decisions for us.”

Here is an exit interview with Anya Rader Wallack as she embarks on the next phase of her career in Vermont, reflecting on the current state of affairs in health care in Rhode Island.

ConvergenceRI: What are the takeaways from your career in Rhode Island, where you have seen the inner workings of the health care machine?
RADER WALLACK: Rhode Island is a special place, and the state’s health care system has some real strengths – including relatively strong primary care and good cooperation between policy makers and health system leaders.

But health care costs continue to rise faster than our income, as they are across the country, and I worry that continued market consolidation and an under-resourced state government will exacerbate that problem.

Market consolidation will logically lead to higher prices, and price growth is what is driving health care cost growth. State leaders need to beef up their capacity to monitor and control costs.

Also, long-term care needs more attention [again not unique to Rhode Island]. The pandemic made that glaringly obvious, and I hope the collective memory doesn’t fade.

Too often this is seen as only a Medicaid problem, but we have a weak LTC [long-term care] system and that is a problem for all of us.

ConvergenceRI: What do you see as the best mechanism to control health care costs, moving forward?
RADER WALLACK: I continue to believe that alternative payment mechanisms – models of payment that move away from fee-for-service and reward value – hold great promise.

Unfortunately, most of what we have tried in the past has been too weak to change the underlying economic and cultural dynamics that drive costs up. We need health system leaders who are committed to fundamentally changing the system to focus on health improvement, and we need stronger financial models that reward those efforts.

ConvergenceRI: What are the advantages/disadvantages of consolidated hospital systems, comparing what has happened in Vermont with what is planned here in Rhode Island?
RADER WALLACK: Both states have seen consolidation, as has the nation. That isn’t a bad thing per se, but it does necessitate a strong regulatory counterweight, in my opinion.

Vermont has more of a regulatory structure than Rhode Island, but frankly neither state has provided the resources needed – mostly analytic power – to regulate effectively.

Consolidation can drive up prices. But it doesn’t have to. It can also reduce duplication of services and create economies of scale. The question is: “Consolidation for what purpose?”

ConvergenceRI: How important are communications in talking about health care policy? Or, conversely, why is it so many in the health care industry fail to listen to what patients are saying?
RADER WALLACK: Communications are critical to successful health system change. The person on the street does not generally understand much about how the health system or health insurance work. It is complex and not intuitive.

If we want to change a system that is so big, so important, so central to the health and well being of the population, we need people to understand why, and we need to have the support of key constituencies, especially the people who work in the system.

The health system is not geared toward including patients in decision-making. Some clinicians are really good at it, but too often patients give up their agency to physicians.

Few people would be willing to let a personal shopper buy all of their clothes, or a realtor buy their house for them, but we essentially let physicians make our health care purchasing decisions for us. That should change.

ConvergenceRI: Do health practitioners need to pay more attention to environmental contributions to health outcomes? How should they do that?
RADER WALLACK: There is a lot of focus right now on the “social determinants of health,” and that is a good thing.

The health system affects whether we survive an acute health crisis, but other factors like housing, employment, the environment and social supports do more to affect our underlying health.

There are some good examples of health care practitioners trying to address some of those factors, but there aren’t enough. Also there are limits to what the health “system” can affect, particularly when there are state and national policies related to food, housing and environmental health, for example, that have a much greater influence.

ConvergenceRI: What has your son taught you about gaming? Do you think that if there were, say, a Madden game for health care, it would change the equation?
RADER WALLACK: My son, [Jacob “Jwall” Wallack], is a phenom in online football. He has showed me how analysis of the game, hard work and determination can lead to success, and I am very proud of him.

Years ago I participated in a brinksmanship-type game related to nuclear weapons – it was facilitated in communities around the country to develop better understanding of the dangers of nuclear weapons and the value of diplomacy.

I have sometimes wondered if there could be a similar community-based exercise that helps people understand health reform options. Maybe I will work on that when I retire.

ConvergenceRI: If you had an exit interview with Dean Ashish Jha, what would you want to tell him about the future directions of the Brown School of Public Health?
RADER WALLACK: I think the School of Public Health needs to continue to be relevant in Rhode Island, and to increase its relevance. There have been some great collaborations between the school and the state, related to COVID, and some great joint work on health care cost analysis.

The School should find more ways to contribute to the discussions about Rhode Island health policy, and bring more science and intellectual power to those discussions.

ConvergenceRI: Will you consider trying to resurrect a version of the single payer plan in Vermont?
RADER WALLACK: We made a valiant attempt at designing and implementing a single payer-like system in Vermont, but it was too dang hard. I’m attaching a piece I wrote for NEJM Catalyst that explains why. For all the reasons I cite there, I do not think we will seriously attempt at the state level again for a long time. [See link below to article.]