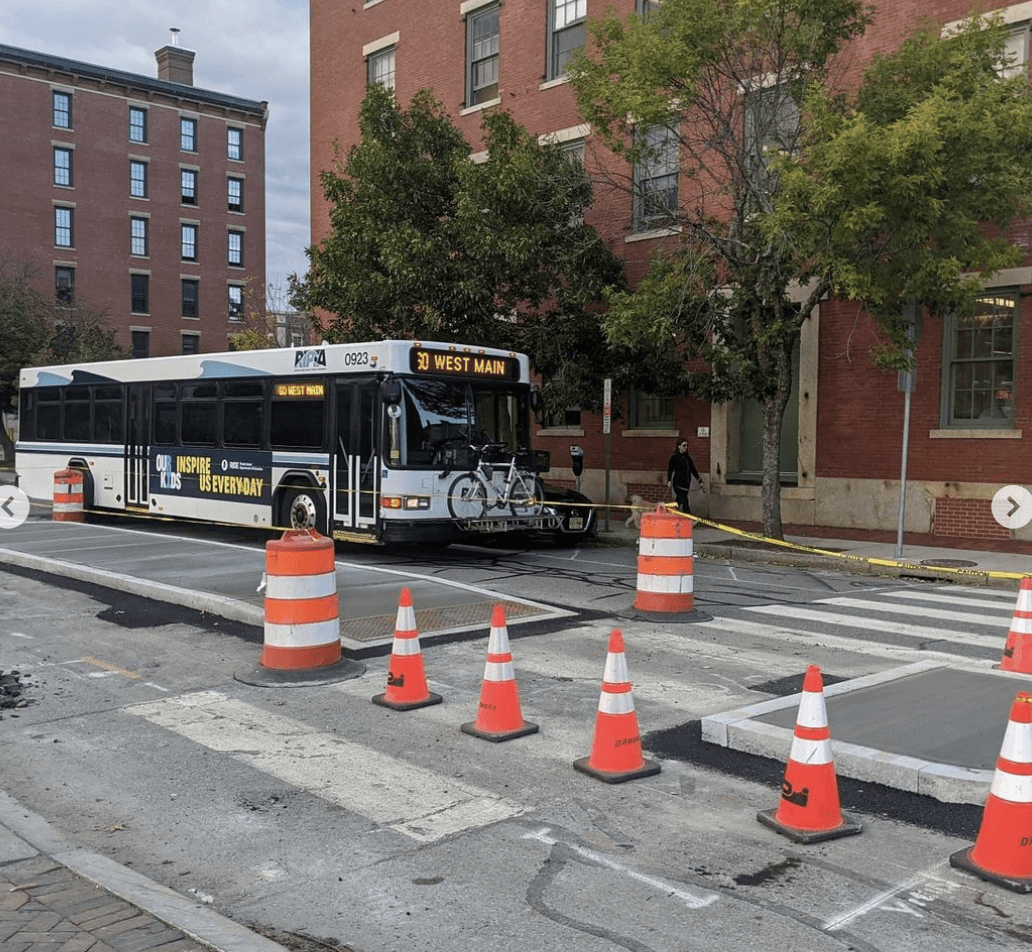 Update (10/6/21): TODAY, Peter Alviti, head of RIDOT, says that this construction is in violation of binding agreements of a contract – they cannot use taxpayer federal dollars to do the project. The revamp must maintain the original intent which is as a two lane road primarily intended for egress from downtown Providence.

Update (10/7/21): However, Mayor Elorza instructed construction to be completed and today, white divider poles were installed. Alviti issued another cease and desist instruction as NBC10’s Katie Davis was working on the story for the evening news. Sharon Steele, of the Jewelry District Association said, “There are no words to describe the level of dysfunction in this administration…” – Elorza did not respond to NBC10’s request for comment.

Original photo heading this article was replaced when the Providence Bike Coalition said we did not have permission to use it.

This follows actions brought by the Jewelry District and signed by Brown University, RISD, and 10 local businesses that the bike lane project was dangerous and interfered with deliveries to their businesses, travel and parking and posed a deterrent to doing business.

Sharon Steele, spearheading the business group/Jewelry District Association told NBC10, “The city created this disaster. The city has not listened to us, nor will they listen to us.”

RIDOT said that they were never notified, nor was the Federal Highway Administration that the city “has begun making significant changes” to the roads inconsistent with an agreement about the joint use of federal highway funds that requires the city and state to agree on a construction plan.

Earlier this week a delivery truck was seen stuck and unable to make a turn because of the raised areas of the street that have been built to accommodate bike lanes. A traffic tie-up went on for some time.

Here is the letter from the businesses:

The Providence Streets Coalition, a group that promotes bike lanes, paths and pedestrian use of roadway areas said on Twitter that they had hoped that people would wait to pass judgement on the efficacy of the bike lanes until the construction was completed and some time had passed.

In 2019 a project took place on Eaton Street near Providence College which divided the already slim street into bike and pedestrian lanes – it was done with little notification to the community – within a few weeks the city was taking out the restrictive lanes. The city said it was approximately $100K to put the project in – and another $100K to remove it.

The South Water Street project is part of a project in Providence called “Great Streets” which is set to “break ground this fall, prioritizing safety and accessibility for all travelers”.

To view the news report from NBC10’s Katie Davis: