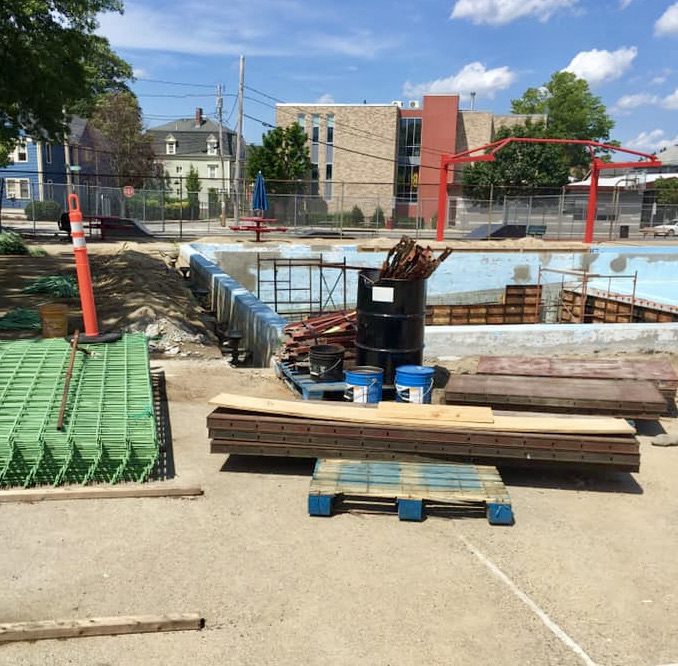 This is a developing story…

After 2 days of calls to the city of Providence to determine the status of the public pools, particularly the pool at the Davey Lopes Recreation Center, and receiving mixed messages about opening, construction and adjustments, the city released a statement about the status of the Water Parks and public pools on Thursday morning.

Several sources confirmed that the Davey Lopes pool is being “shallowed” – going from 12 feet at the deep end to 4-5 feet. Why this change is being made could not be determined. The announced opening date of July 7th will not be met if concrete is poured.

Shallowing public pools is, in the industry, becoming more popular to increase ease of maintenance, and using less water and energy in terms of pumps and equipment use. Referred to as “sports or play pools”, these pools need to have their diving boards and slides removed with ‘no jumping in’ rules enforced.

Save the Davey Lopes Pool – redux:

Seven years ago a group of committed Rhode Islanders, media, community activists, legislators, and contractors came together to insist that the city of Providence open the pool at the Davey Lopes Recreation Center, the center of activity in the community. As the city announced that the pool would not be opened as major construction was underway to shallow the pool, an emergency meeting was planned.

An emergency ZOOM meeting was held Thursday with Mayor Elorza and Ray Rickman, Director of Stages of Freedom and swimming education advocate, and Leah Williams Metts, who was an integral part of saving the Davey Lopes Pool 7 years ago. After the meeting, Metts said that the Mayor had agreed to stop further construction now – no filling in of the deep end – and get the pool open as soon as possible. Rickman agreed that this is the direction the Mayor will pursue, with his confirmation expected on Thursday of next week.

Throughout Rhode Island the opening of public pools is stymied. Warwick’s McDermott Pool, an indoor pool, is not open as a new motor and malfunctioning heating pipes and lifeguard issues are a problem. No open date has been announced. A RINewsToday photographer went to photograph activity at the pool and the building was shut with no workers or activity in sight.

The Cranston Budlong Pool is a major community issue in that this large outdoor pool is the center of the city’s public gatherings in the summer with young children, and the location of their summer camp swimming and water play program. During 2020 the pool was closed and did not have its seasonal repairs due to COVID. With a change of Mayor and Recreation Director, the pool was not prepared to be opened – possibly because no one thought pools would be reopened this year in light of the pandemic – and will not open for the entire season. This has met with a lot of negative discussion on social media among city residents.

In Pawtucket, the Veterans Pool in the Fairlawn section is waiting on the hire of lifeguards. Needing at least 2 or 3, the city confirmed that they have had no applications.

Stages of Freedom’s Ray Rickman has stepped forward offering to add an additional $4/hour to the pay being offered for Pawtucket lifeguards, in hopes of recruiting up to 4 for the summer season. “Let’s get the pool open, and maybe this will help some young people already certified and set to go to come to Pawtucket,” said Rickman.

Tom Rosa, the Administrative Officer for the RI DEM Division of Parks and Recreation, explained the state’s lifeguard program: “The State of Rhode Island does not operate any pools nor require lifeguards to have a State certification in order to work at a pool. They must however possess training cards in Lifeguarding, First Aid, and CPR from an accredited organization such as the American Red Cross. The municipalities are responsible for recruiting and hiring these employees. We are responsible to certify lifeguards that are working at waterfront facilities for State operated beaches, municipal beaches, and private beaches. They also must possess the above training cards, and then come to one of our State lifeguard certification tests. We only hire guards for the State operated beaches. Municipalities and private entities are responsible to hire their own staff.

Pending the opening of The Davey Lopes Recreation Center Pool which had been undergoing construction, and hoping for a halt to that construction for this year, it will take some time to get the pool filled and open. During this time, the City will be offering free, frequent shuttle rides for Providence residents from Davey Lopes Recreation Center to McGrane Pool at the West End Recreation Center. To utilize shuttle services, residents must complete wavier forms and will be asked to wear a mask while riding in the shuttle.

Additionally, five-dollar a week recreation day camps begin Tuesday, July 6 and Providence youth can still sign up for some sports camps online. Residents can access the wavier forms, shuttle schedule and more information regarding summer camps on the Recreation Center website. For additional information residents can also contact the Mayor’s Center for City Services by dialing 3-1-1.

RINewsToday will keep the community updated on next steps for the Davey Lopes pool, and other closed pools as they hopefully all open in a week or so to provide positive activities for children and families in Rhode Island.