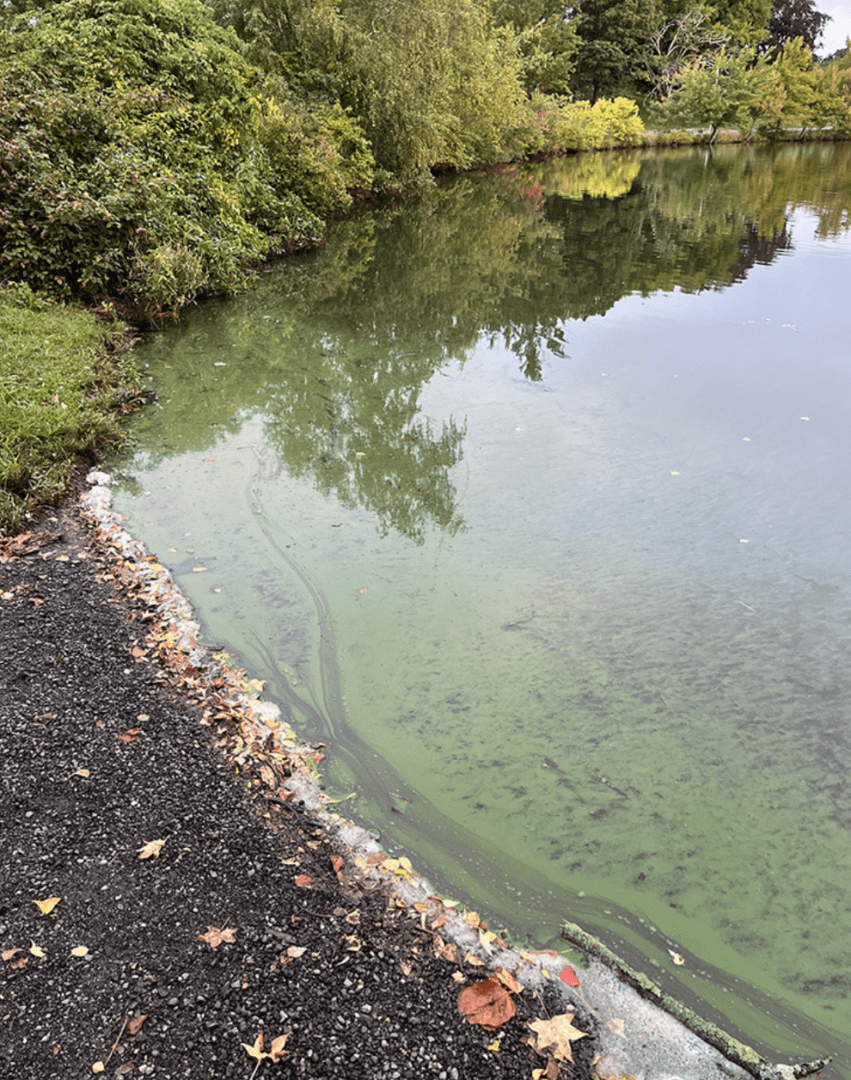 Bacterial algal blooms and the toxins they produce are a persistent problem in freshwater lakes and rivers, and have affected local populations by contaminating drinking water and placing a significant burden on local economies due to diminished recreational activity. The toxins can sicken pets and livestock that drink directly from the waterways, and potentially pose a significant danger to people’s health.

University of Rhode Island College of Pharmacy Professor Matthew Bertin is trying to mitigate the problem, discovering new toxins in local waterways and working to develop a detection and monitoring system to protect the public, thanks to a $400,000 research grant from the National Institute of Environment Health Sciences, a division of the National Institutes of Health.

Bertin and his team of three pharmacy graduate students are scouring three lakes in Roger Williams Park in Providence — Pleasure Lake, Polo Lake and Cunliff Lake — harvesting algae when it blooms on the surface and testing it for toxins. The team is also working with biotech firm Biosortia Pharmaceuticals Inc., which has the capacity to access and harvest unprecedented amounts of algae to study. Biosortia’s harvesting technologies enable researchers to evaluate aquatic microbial chemistry in its most natural state. While its work just began in September, the team is already showing results, uncovering a surprising, and potentially alarming, number of new toxins.

“Just doing some cursory work, we found five new toxins. We think there are likely dozens,” Bertin said. “The Biosortia team led a study with help from my lab and found some exquisitely toxic molecules; we called them cyanobufalins. They’re crazy toxic. One of the great challenges is that some highly potent toxins are difficult to access. Our lab, working with Biosortia, has found previously undetected elusive toxins. We really think there are many new toxins in these blooms that haven’t been characterized yet. We’re trying to understand the full spectrum of toxins in these bloom events. Are we missing certain toxins that we need to be monitoring?”

The most prevalent danger of the toxins to people is the effect they can have on the liver. When the bacteria find their way into freshwater drinking systems and are ingested, they can infiltrate the liver, causing damage and possibly liver failure. The toxins can also cause skin ailments when people are exposed to the water, and can also potentially be ingested through dietary supplements like Spirulina, made from bacteria.

Bertin and his team collect water from the lakes in the park once a week, or when conditions are right for an algae bloom, which seem to be most common in late summer and early fall, indicating water temperature may play a role. They filter the water through various size filters to extract different organisms for study. As the team discovers new toxins, they are categorized so they can be monitored in fresh waterways going forward, and alerts can be issued when there is a danger.

“Many organisms are in there. We are trying to tease apart the community members (bacterial organisms) and connect them to particular toxins,” Bertin said. “We want to find out which toxins are created by which critters.”

Studying algae is nothing new for Bertin, who has worked for years on the blooms in both fresh and salt water. His previous work has discovered potentially beneficial chemicals in the blooms that can be key to reducing neuroinflammation, a primary factor in diseases such as Alzheimer’s and Parkinson’s.

Fresh water algae are particularly concerning, however, due to their proximity to people and the potential to deliver harmful toxins into the water supply. Bertin’s study, “Shifting paradigms to emerging toxins in freshwater cyanobacterial blooms,” is funded for the next two years, during which the team plans to discover and categorize the full community of toxic bacteria found in algal blooms, and document the effects those toxins have on the human body.

“What we’re really going for is trying to provide new knowledge on the full breadth of these toxins,” Bertin said. “We want to know what the toxic microcystins are, how to detect them and how to monitor them. We also want to know how these toxins work together. Do they all combine for a bigger dose? Do they act separately inside your body on different systems? We are trying to understand the full breadth of the human impact these blooms might have, especially as they become more common, due to how humans manipulate the land and water resources, and a warming climate.”

URI Pharmacy Professor Matt Bertin and his research team collect algae from blooms in bodies of water at Roger Williams Park, including Cunliff Lake and Pleasure Lake. The team is searching for potentially harmful toxins in the blooms.