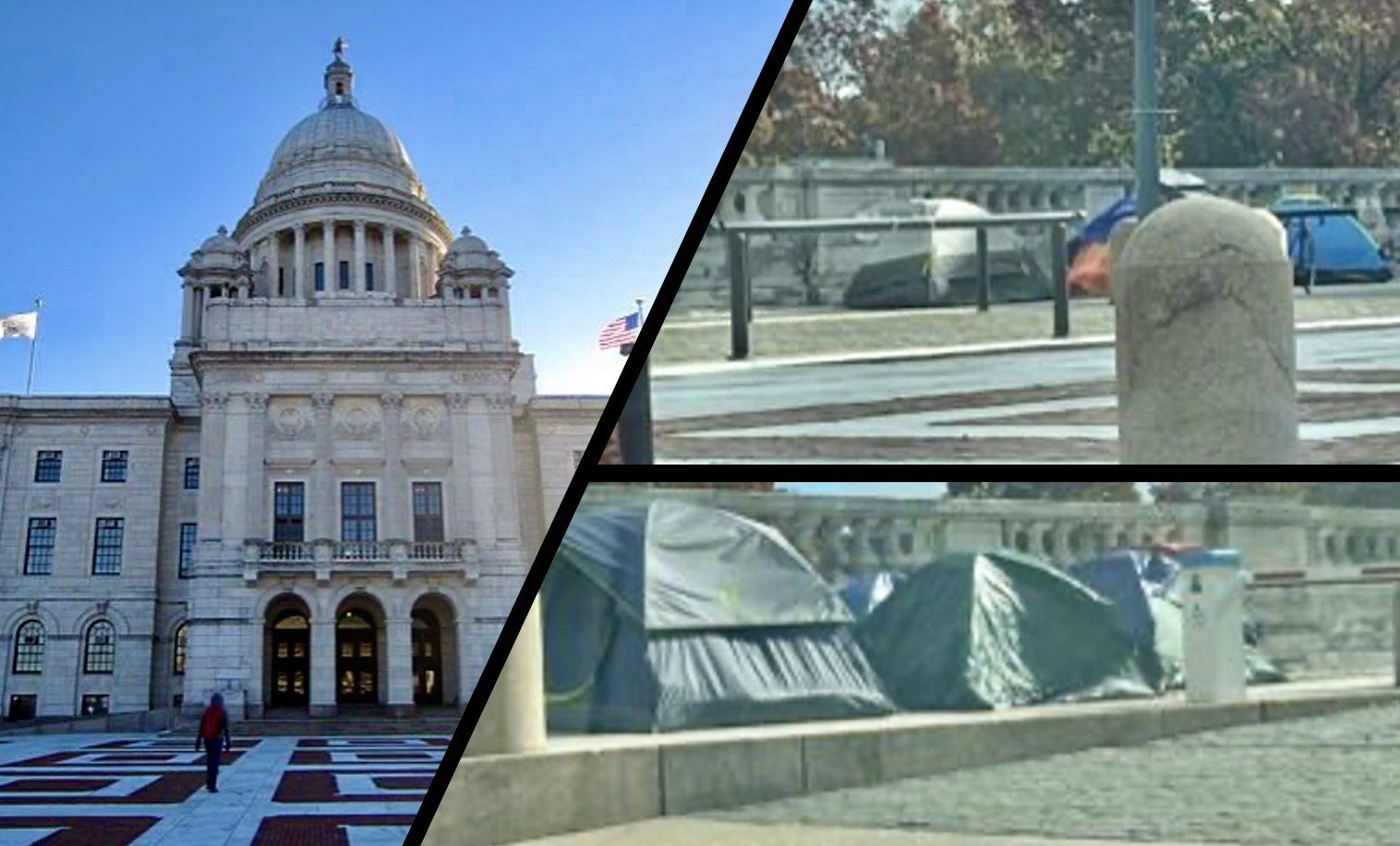 This morning it is 32 degrees.

A few weeks ago a demonstration at the RI State House showed what a Pallet Shelter, or “tiny house” was when it was erected for the day. Off to the side were a few tents set up along the perimeter of the State House courtyard walls. Today, the tiny shelter is gone and the tent encampment has grown, along with complaints of trash and/or belongings scattered around. The visual is starting to look much like the encampment just before the primaries when a few people running for office slept outside with the homeless in tents to draw attention to their campaigns, and to the need for housing. Both leaders in that effort lost their elections and both are not involved in the current homeless encampment or are speaking out about the need for emergency housing this winter. We reached out to the state for an update.

In pre-midterm elections, Gov. McKee said that the emergency beds needed would be provided by Thanksgiving – with everyone who wanted a bed having access to one.

In a statement sent to us by Chris Raia, spokesperson for the “housing czar” office – RI Office of Housing and Community Development – Raia responded about the State House tents and also complaints about collecting “trash”.

“…outreach workers regularly meet with individuals encamped at the State House to make them aware of support services and shelter options and to facilitate their movement to available beds.

Anyone who is continuing to encamp at this location has declined opportunities to move to alternative shelter resources.”

DCAMM [the RI Division of Capital Asset Management & Maintenance] is emptying trash cans at the State House on a regular basis. DCAMM is not, however, removing anything that is not placed inside trash cans.

Per the Homeless Bill of Rights, there is a concern about misidentifying items as trash that may have value to those in the encampment.

We are continuing to work with homelessness service providers to identify and connect any individual or household in Rhode Island experiencing homelessness with resources and services they need.”

Raia offered, “We will have an update on further shelter bed expansion efforts in the coming days.”

In a statement 3 days ago Josh Saal, RI Housing czar said, “In the short term we’ve made some immediate investments to extend our shelter capacity. This year we’ve funded 274 beds and expect to announce more beds…

However, shelter beds in themselves are not the goal. They’re a sign of large structural issues. [Addressing homelessness] involves creating permanent housing, supportive housing, and solutions that will make homelessness rare and brief.”

The Rhode Island Coalition to End Homelessness provides these stats in a graphically compelling way on their website – representing data as of November 3rd: