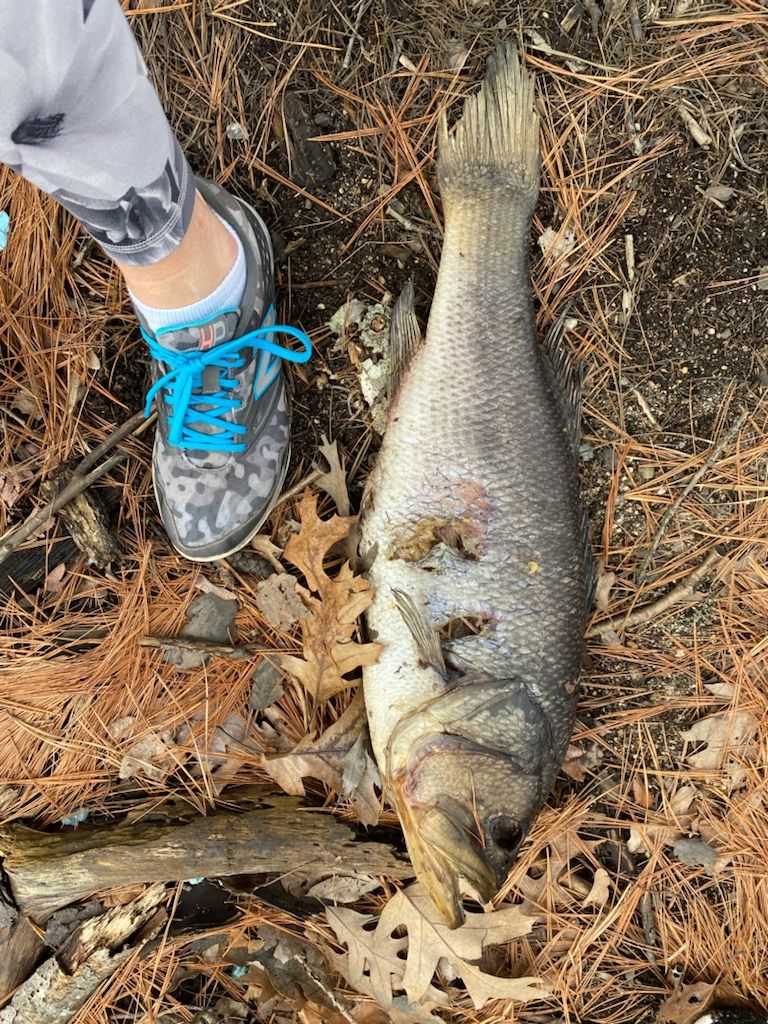 We have a local crisis here in Rhode Island. Johnson’s Pond, once a fishing and recreational jewel in the state, looks more like a dried up California lake.  Only, in the case of Johnson’s Pond, it is owner inflicted, and not because of a drought or any natural happening. This dilemma has been going on since at least last summer. This writer has fished the pond since the days when the New Haven train would actually cross the Johnson’s Pond RR bridge. Only one other time was there such a long term severe lack of water in the pond, and that was in the 1970s when dam repairs were needed. This long term lack of water has raised havoc with a number of wildlife species. There are numerous photos of fish kills online.

Johnson’s Pond used to be a great fishing pond with the RI DEM stocking Bass and Pike throughout the years. It was not uncommon to catch some very large fish. With the lack of water, very few of these species exist in the pond now. Occasionally a Brook Trout would migrate in from Big River and be caught by a lucky angler on the pond. According to a Rail Trail sign at the north end of the pond Steel-head Trout can be found in the pond. That is unconfirmed ,however with the lack of water neither species of trout will be found in the pond. What few fish are left are easy targets for Osprey and other Raptors as the water is no more than 2 feet deep in the remaining pond channels.

Waterfowl is threatened on the pond. Mallards, Mergansers, Woodies, and a few Green Winged Teal have no place to nest and rear their young. Normally, water protected nesting areas, but now the areas are sand and mud which will allow predators to raid the nests. More than likely, nests will not even be constructed now. Waterfowl will not nest in an area where there is no water, and they do not feel safe.  Great Blue Herons currently have little place to feed. Combine that with the fact of there is no place for any supposed remaining fish to spawn, as the spawning bed areas are all dry dirt. There is nothing for the Herons to feed on. Also caught in the calamity are the turtles, amphibians, and shellfish. Due to the rapid release of the water, these species could not adjust their hibernation spots, and as a result dead turtles are being found – as seen in the photo, here, of the Snapping turtle, circled in red.

Contact with the RI DEM on Thursday has so far not received a reply. I feel I speak for most Sportsmen and Women asking the RI DEM to intervene in the matter. I spoke with a dam keeper in Central Maine this Thursday morning, and he stated in their state, if dam keepers do not properly work the dams, they would come in and take the dam by eminent domain. Maine DEP has oversight of all dams in Maine. This crisis is unacceptable and needs immediate remedy.

I ask you to contact the RI DEM Director and voice your concern in a professional but firm manner on this calamity. In the two similar calamities that have occurred in Rhode Island over the last 25 years, the RI DEM intervened on both. Allegedly, numerous Johnson’s Pond residents had their wells run dry last year due to the low pond water. The DEM must intervene with Johnson’s Pond for the benefit of the thousands of pond residents and non-residents that all utilize the pond.