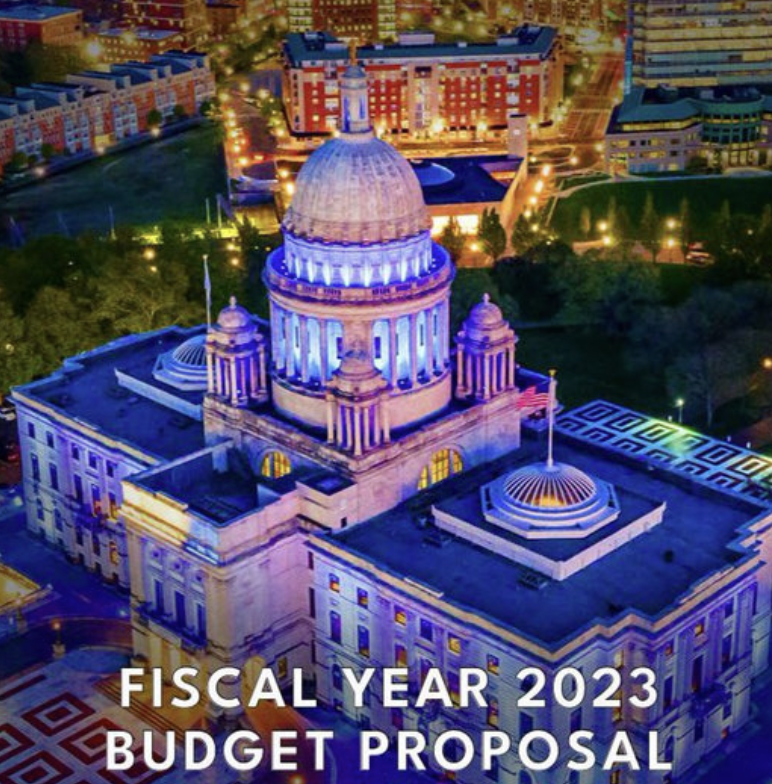 Photo by Mike Cohea, image courtesy of the R.I. OMB

The cover of the budget document for Gov. McKee’s proposed FY 2023 tax and spending plan.

Lack of critical, in-depth reporting and analysis of Gov. McKee’s proposed budget, state-of-state address, reveal the dangers of living in a “misinformation” state

Call it the big sleep, with apologies to Raymond Chandler. There is something perverse about the way that the Rhode Island news media can so quickly transform itself into a cheering squad. Last week, with great fanfare, many political reporters recounted the alleged “meaty” state-of-the-state address delivered by Gov. Dan McKee, as well as the spending initiatives in his proposed FY 2023 budget. What got left out of both may prove to be as important and significant as what was actually said.

Too many stories appeared to accept and then repeat the branding put forth by the Governor in a flurry of news releases and pressers that championed his proposed FY 2023 state budget, without critical analysis, in ConvergenceRI’s opinion. It was a great public relations performance by the Governor’s team, for sure.

• Touted an assortment of road-building projects as addressing “climate change” – but ignored, just as Gov. McKee did in his address, the biggest climate threats facing Rhode Island: expansion of fossil fuel infrastructure in the Port of Providence, plastics proliferation and incineration, and the pending sale of National Grid to PPL.

•  Praised a series of new “small business” initiatives that amounted to tax reduction schemes – but excluded, just as Gov. McKee did in his address and his budget, reporting on the need for increased state investments to boost the low Medicaid reimbursement rates for providers, low rates that have crippled community nonprofit agencies, which, ironically, make up nearly one-fifth of the state’s total workforce.

• Highlighted the proposal to extend the ability to continue to sell alcoholic drinks on a take-out basis as a way of boosting revenue for restaurants – but failed to report that Gov. McKee, even with Rhode Island in the midst of a continuing epidemic of substance use, opioid addiction, a rising death toll and a flood of unmet behavioral health needs, had not included any increased budget investments to support recovery and harm reduction efforts. Could this be seen as political retribution targeting the recovery community for challenging the Governor and Director Richard Charest for attempts to cut more than $2 million from funding for such programs?

Instead, the state is seeking to increase liquor sales and alcohol consumption to drive the economy, despite research that has shown that in 80 percent of all overdose deaths, alcohol abuse is the major co-morbidity – and that drunk-driving incidents have increased dramatically over the last few years.

• Reported that Gov. McKee thanked outgoing R.I. Department of Health Director Dr. Nicole Alexander-Scott for her service [even if the Governor was responsible for forcing her to leave], and how she had received a standing ovation – but omitted any mention of the proposed merger of Lifespan, Care New England, and Brown University into a consolidated academic medical enterprise that would control 80 percent of the market share.

That made for a pointed rebuttal in the Republican response delivered by House Minority Leader Blake Filippi, who said: “Lifespan and Brown University lobbied the Raimondo administration, who then killed the Partners deal so Lifespan and Brown could instead scoop up Care New England – and control over 80 percent of health care delivery in this state.” Filippi continued: “Eighty percent is a veritable health care monopoly that is a prescription for disaster – taking way medical choice and innovation from patients, and driving up costs. And health care workers: you’ll be stuck at the only employer in town.”

Marketing hope as a political brand
There is no argument that the choice of Mike Cohea’s stunning photograph of the State House lit up in blue for the cover of the Fiscal Year 2023 Budget Proposal was a brilliant public relations move: Gov. McKee explained the choice, saying, “It perfectly symbolizes what the future holds for Rhode Island: Hope.”

The problem is what actually resides within the budget document itself – and the glaring omissions when it comes to proposed state spending and policy for the next year.

Take, for instance, Gov. Dan McKee’s claims about wanting to pump up the volume on the small business sector in the state, as witnessed by his claims in the state of the state address delivered on Tuesday, Jan. 18, with much fanfare.

In a news release touting his proposed investments in the FY 2023 budget request, Gov. McKee promised that the state would take steps “to improve Rhode Island’s small business climate.”

“Small businesses make up not only a crucial part of our economy but also our identity – we are truly a small business state,” Gov. McKee said in the news release, touting his experience as a former small business owner.

The basic problem is that Gov. McKee, in his budget, neglected to talk about or include or recognize that the nonprofit community agency workforce represents nearly 20 percent of the entire state workforce, according to Cortney Nicolato, president and CEO of United Way or Rhode Island.

Translated, one-fifth of the state’s workforce was omitted from the future vision of small businesses in the state, not a very inclusive view, to say the least. At worst, it serves to perpetuate the continuing decline of economic prosperity in the Ocean State, because the work performed by community nonprofit agencies undergird Rhode Island’s economic engine.

“Every other state in New England has, over the last 10 years, seen a 15-20 percent growth in their nonprofit sector,” Nicolato said. “During that same period, we in Rhode Island have seen a reduction [emphasis added] in our workforce of 2.3 percent, the only state in the nation to have seen a reduction in our nonprofit workforce.” [See link below to ConvergenceRI story, “Forging a new social contract.”]

Yet, many of the proposals touted under the small business section of the proposed FY 2023 to grow the small business sector are targeted at lowering taxes – reducing the corporate minimum tax, reducing the rate on delinquent tax payments, creating a taxpayer steward to help resolve taxation challenges, and creating a sales tax exemption for the trade-in value of motorcycles.

Voices from the front lines
ConvergenceRI reached out to John J. Tassoni, Jr., vice president of Operations, Community and Government Relations at the Substance Use and Mental Health Leadership Council of Rhode Island to address shortcomings in Gov. McKee’s FY2023 budget, asking about potential major gaps in investment.

ConvergneceRI: How significant was it that there was no mention of substance use, and mental and behavioral health needs in the Governor’s FY 2023 budget?
TASSONI: Very disappointing, since the overdoses are up and issues dealing with mental health are rising – and all that money [from the American Rescue Plan Act] that has not been distributed.

ConvergenceRI: In the Governor’s small business plans, there seemed to be no recognition that the nonprofit sector represents 18 percent of the workforce in RI, and community agencies undergird the state’s economic well-being. Not addressed by the state were its failures in state contracting and the willingness to pay a living wage? Is that accurate?
TASSONI: Yes. The rates [for reimbursing providers] need to be addressed ASAP for the providers. We need help with uncompensated care, like the hospitals receive.

ConvergenceRI: I was struck by the proposal under the small business section of the budget to allow greater access to alcohol sales as takeout items from restaurants, as an economic driver, rather than a serious challenge to efforts to address mental health needs. Is that an appropriate question to ask?
TASSONI: The priorities of the state need to be looked at because of overall effects of substance use and mental health moving forward and also the funding of both.

ConvergenceRI: While the budget proposal to increase Medicaid coverage for moms following births appears to be a positive step forward, it does not address the underlying problem: low reimbursement rates and network inadequacy, so that mothers attempting to receive care may be thwarted from doing so, because there are no providers available. What needs to change?
TASSONI: Access to care needs to be expanded and payments to providers need to be brought into line with today’s rates.

The gutting of R.I. EOHHS
ConvergenceRI also reached out to State Sen. Sam Bell, following a series of tweets he posted as he began to review in detail sections of the proposed FY 2023 budget by Gov. McKee, examining what appeared to have been major cuts and slashing of the “unconstrained” budget proposal put forth by the R.I. Executive Office of Health and Human Services.

ConvergenceRI: Can you expand on what appears to have been cut from the unconstrained R.I. EOHHS budget proposal?
BELL: Early Intervention rate increase.

And this is f***ing wild one: They seem to be canceling the inpatient substance use disorder beds Medicaid billing initiative. [Editor’s Note: Bell wrote ConvergenceRI to say that the use of ‘f***ing’ was very much intended to be on the record.]

Translated, the McKee administration seems to be willing to undercut the efforts by R.I. EOHHS to correct many of the funding deficiencies and network adequacy issues raised by legislators and consumers and agencies. The question is: How will the leaders of the R.I. General Assembly respond to this brazen attempt by the McKee administration to gut the efforts by R.I. EOHHS to correct funding deficiencies supporting many of Rhode Island’s most vulnerable residents?

Another question: Why has the news media failed so far to report on these budget details contained in Gov. McKee’s proposed FY 2023 budget?

A third question: Why hasn’t Capitol TV posted the video of the hearing held on Thursday, Jan. 20, by the Senate legislative commission studying the efficiencies of R.I. EOHHS? What has caused the delay?

To read the story in completion: http://newsletter.convergenceri.com/stories/when-the-news-media-shape-shifts-into-a-cheering-squad,7037