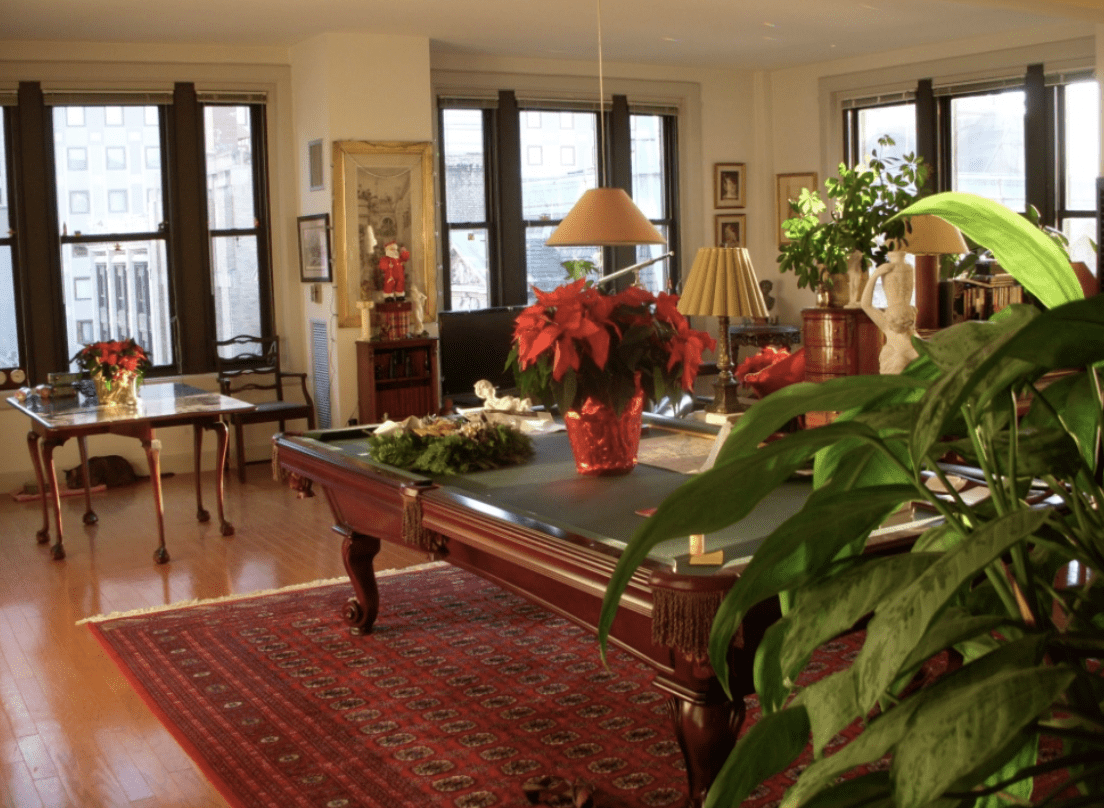 I once lived for 11 years, 1999-2010, in a downtown Providence billiard room. It was a loft on the fifth floor of the Smith Building (built in 1912) on Eddy Street, renovated in 1999 with views looking to the south and east, down Fulton Street between City Hall and the old Providence Journal building (1906). I say it was a billiard room because when I moved in I did not have enough possessions to fill a loft of 1,100 square feet, so I bought a pool table of regulation size, high-quality slate, and sexy legs around which I arrayed my living, eating and sleeping space.

Now, since 2010, Victoria, Billy and I live in a house with more than twice as much square footage, but the pool table is in the basement. I miss the loft and its intimate view of profuse detailing at that level of both City Hall, in the Second Empire style, and the Journal, in a Beaux Arts style. No, there was nothing like playing in that eyrie space. Now our basement is almost entirely unfinished, filled with junk, but with enough room to fit a pool table, which needs enough room around it so that long, slender cues can be used to play the game. Before buying, we saw countless larger houses that would not have had enough room to fit a pool table in the basement (and which were mostly too expensive anyway).

I dream of adding an extension to our modest house that would fill in the grossly large asphalt space between the house and the garage. The pool table would be on the upper floor and many windows would look out upon the relatively pleasant neighborhood backyards. It would not rival our loft downtown, of course, but in the meantime I fortify my illusions of billiardly grandeur with the following passage from W.G. Sebald’s Austerlitz.

The protagonist, Jacques Austerlitz, is describing an upstairs billiard room that has been secretly sequestered from the rest a 1780 house in Oxford, owned by a James Mallord Ashman, after his house was requisitioned in 1941 for official use as a wartime convalescent home.

[Ashman’s] ancestor used to play frame after frame of billiards against himself in this retreat, which he had equipped specially for the purpose, often until the dawn of day. Since his death on New Year’s Eve, 1813, no one had ever picked up a cue in the games room, said Ashman, not his grandfather or his father or himself, Ashman, let alone one of the women, of course. And indeed, said Austerlitz [in describing Ashman’s billiard room] everything was exactly as it must have been a hundred and fifty years before. The mighty mahogany table, weighted down by the slate slabs embedded in it, stood in its place unmoved; the scoring apparatus, the gold-framed looking glass on the wall, the stands for the cues and their extension shafts, the cabinet full of drawers containing the ivory balls, the chalks, brushes, polishing cloths, and everything else the billiard player requires, had never been touched again or changed in any way. Over the mantelpiece hung an engraving after Turner’s View from Greenwich Park, and the records book in which the selenographer, under the rubrick Ashman vs. Ashman, had entered all games won or lost against himself in his fine curving hand still lay open on a tall desk. The inside shutters had always been kept closed, and the light of day never entered the room.

My own billiard room had no means of blocking the view, thank goodness, and Ashman’s billiard room, between 1780 and 1813, appears to have always been used only overnight. Its view would have been a wooded park near Oxford University, whereas my view was of downtown Providence extending through Kennedy Plaza, past Fulton Street’s row of skyscrapers, the federal courthouse built in 1918, and up College Hill – a superior view in my book. Even our wall without windows was hung with my collection of large, framed plat maps of downtown, College Hill and other precincts of the city. I doubt I’ll ever enjoy its like again. But one may always dream.