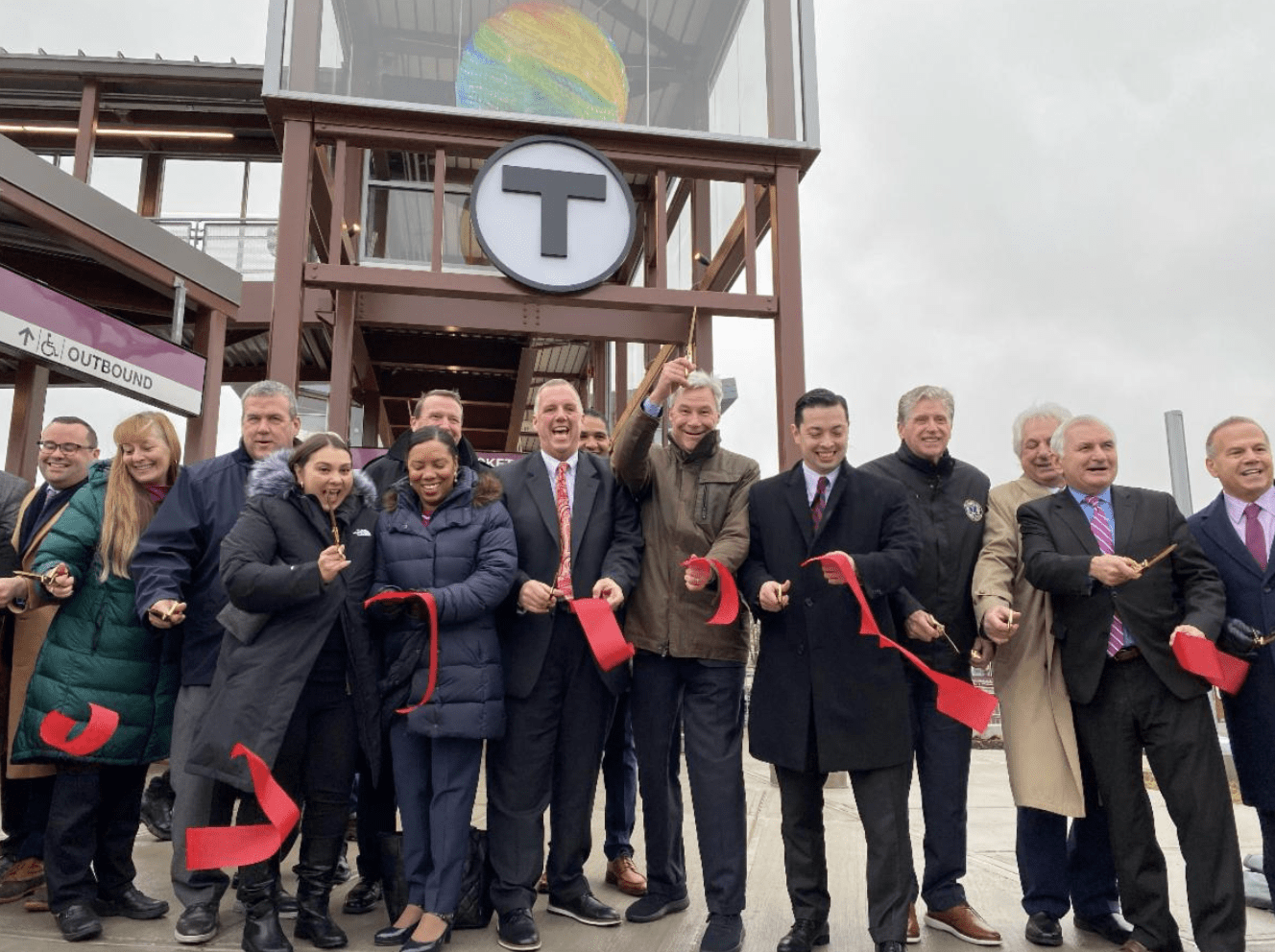 The opening of the Pawtucket-Central Falls Transit Center took place as the culmination of years of planning and completion of a $63 million design-build project that began four years ago. More than two-thirds of the project cost, approximately $43 million, was paid for with federal funds.

Governor Dan McKee and other elected officials as well as the congressional delegation and dignataries from Washington were nothing short of gleeful as they cut a red ribbon to open this long awaited transportation hub – taking a train, themselves, from Providence to launch the first day of service for the new Pawtucket-Central Falls Transit Center. Earlier that day at approximately 4:21, the first train left the station with about a dozen private citizens who wanted to just be the first to take the train. An estimated 500 people a day are expected to ride the train.

Governor Dan McKee: “The rail-bus transit center will provide a robust combination of commuter rail and bus service in an emerging area of transit-oriented economic development in Pawtucket and Central Falls. It will allow riders to switch modes of transportation easily between commuter rail operated by the Massachusetts Bay Transportation Authority (MBTA) and RIPTA’s statewide bus network – making it easier and more convenient for many Rhode Islanders traveling to and from Boston and other destinations in Massachusetts. I want to thank our Congressional Delegation and all the federal, state and local partners who helped make this day a reality. This new station is a major addition to Pawtucket, Central Falls and all of Blackstone Valley, supporting economic development efforts in these communities while providing tremendous transit options for all Rhode Islanders and those visiting our great state.”

Senator Jack Reed: “This long-awaited station is a key link in a broader economic development strategy for Pawtucket and Central Falls. I am proud to have led efforts over the last two decades to deliver federal investments to complete this state-of-the-art transit hub. In addition to providing efficient, reliable transportation options for commuters, it will drive private investment, economic growth, and opportunity for the whole area.” Reed first secured a federal earmark for the station planning in 2004 and who helped create the competitive TIGER grant program as a way to spur tough-to-finance projects like this that have a significant impact on a region or metropolitan area.

Senator Sheldon Whitehouse: “The delegation worked for years to secure over $40 million in federal funding for this project, which will significantly improve Rhode Island’s public transit system. The Pawtucket-Central Falls Transit Center will increase access for passengers and support economic growth in the Blackstone Valley for generations to come.”

Congressman David Cicilline: “I’m thrilled to have helped deliver approximately $43 million in federal funding for this project alongside my colleagues in the Congressional delegation. This station will provide new rail and bus service options for residents, improving the quality of life and transit connections for those in Central Falls, Pawtucket, and the Blackstone Valley. The hub will also help spur economic development and contribute to the sustainability of our state and regional transit system, reducing congestion on our roads and lowering greenhouse gas emissions. Congratulations to everyone involved in this years-long project. I encourage all Rhode Islanders to explore this and other public transit options in our state.”

Congressman Seth Magaziner: “The new Pawtucket-Central Falls Transit Center will catalyze economic growth for the entire region. By establishing a new commuter rail stop and enhancing bus service, this station will revitalize the surrounding neighborhoods, reduce air pollution, and make it easier for Rhode Islanders to get to work. I applaud federal, state and local officials who guided this project and the working men and women who have made it a reality.”

Buses: In addition to the rail service, the new bus hub built adjacent to the train station will serve the many bus commuters in the Pawtucket, Central Falls and greater Blackstone Valley area. The cash fare is $2 per boarding or $2 for one hour of unlimited rides when paying with Wave, RIPTA’s smart fare collection system. RIPTA allows riders with MBTA monthly passes to board RIPTA buses at no cost. This allows riders the option of picking the most convenient schedule options for the traveler.

Location: The transit center is located at 300 Pine Street, near the intersections of Pine Street and Goff Avenue in Pawtucket, close to I-95. It includes dedicated platforms for northbound and southbound service, connected by a glass-enclosed pedestrian bridge, elevators, ramps and stairs. Its elegant design utilizes state-of-the-art composite panels with covered waiting areas. The train station also has a separate drop off area and set of stairs and ramps to the platform on the Barton Street side of the rail corridor.

The Bus Hub: Includes five berths with covered shelters for passengers, with arrivals and departures every two to five minutes during peak hours. The hub connects to a transit emphasis corridor, which includes dedicated bus lanes and bike lanes. Bicycle storage racks are available in the bus hub plaza area.

Still developing: There are portable toilets that will be replaced by RIPTA when it constructs its Passenger Amenity Center at the bus area. “When it is built, the facility should have public restrooms, bus driver restrooms, a driver break room, a police sub-station, an interior waiting area with seats, charging stations, and customer- service people,” RIPTA spokeswoman Barbara Polichetti said.

HISTORY OF THE TRANSIT CENTER

This brief history was written by Rich Davis of the Pawtucket Foundation.

[Here is a] brief summary of the involvement of the Pawtucket Foundation in plans, studies, advocacy, fundraising, and community leadership beginning in 2002. I would not have guessed in the early days that we at the Foundation had embarked on a 20-year project, from origin to realization, but nevertheless the progress from that day to this has been steadily forward. As there may now be fewer of the original stakeholders available to share their memories, I appreciate the opportunity to note several of the fundamental or decisive steps in which the Pawtucket Foundation was engaged.

On a personal note, I will add that following my arrival as the Foundation’s first executive director in the spring of 2001, I spent much of the first six months investigating and cataloguing those areas of economic development, cityscape improvements, and civic engagement which the Pawtucket Foundation could find opportunities either to support or to lead. Mayor Doyle‘s administration was constant in their encouragement of these efforts and in their partnership in implementing the initiatives selected by the Foundation Board. Thanks especially to Mike Cassidy and his staff during the early years, and Mike Cassidy’s memory should be relied on as a source of additional detail on the City’s role in the efforts which led to the opening of the rail station.

Soon after my arrival I observed MBTA and Amtrak trains passing rapidly through Central Falls and Pawtucket, underneath the shuttered 1914 station, on their way to Providence and points south. I also learned that the MBTA trains were being cleaned and serviced at a newly developed railyard facility in Pawtucket. I could not help being struck by the fact that although the MBTA trains began and ended their day in Pawtucket, there was no way for Pawtucket or Central Falls residents to board those trains, and no way for our residents to take advantage of the economic, cultural, and educational opportunities which MBTA service into the Boston hub afforded residents of many other Massachusetts and Rhode Island communities.

·        Follow-up “Ridership Forecasts” and station accessibility study (September 2003) modeling and analysis by KKO and Associates, LLC, done under contract to the Pawtucket Foundation. This study confirmed and improved upon the Foundation’s earlier ridership estimates. David Nelson and Scott Friemann, KKO, authored this study.

·        Meetings with Representative Patrick Kennedy and Senator Jack Reid, procuring and obtaining commitment of $400,000 in government grant funding to support the predevelopment, planning, and engineering study for commuter rail ultimately conducted by Vanasse Hangen Brustlin (VHB). Senator Lincoln Chafee and his office were also helpful during the 2002-2006 period; in January 2007 Senator Chafee’s term ended and that of Senator Sheldon Whitehouse began.

·        Meetings with Pawtucket and Central Falls delegation to the Rhode Island Statehouse, meetings with elected officials of Central Falls and Pawtucket, advocacy with community groups regarding benefits of transit-oriented development

·        Regular meetings with RIDOT regarding placement of a Pawtucket MBTA Commuter Rail Station on the statewide Transportation Improvement Plan (TIP). With the eventual adoption of the commuter rail station project into the TIP, the station’s development was set in motion.

·        Research and advocacy by the Pawtucket Foundation to amend Federal law governing the activities of rail operations of trash transfer & construction / demolition companies; participated and supported in appeal of Superior Court decision regarding local zoning of such facilities, and proper issuance of certificates of zoning clearance. This matter was ultimately decided by the Supreme Court of the State of Rhode Island in favor of the City of Pawtucket. A parallel case was also decided in favor of the City of Pawtucket in U.S. Federal District Court (2008). This decision cleared the way for use of the Providence & Worcester railyard for the construction of the Pawtucket MBTA Commuter Rail Station.  Significant pro bono legal consultations and representation provided by Pawtucket attorney Michael Horan.

Late word from Rich Davis who wrote that he had spoken to Morris Nathanson, a founding member of the Pawtucket Foundation, regarding the professional advice and encouragement he had provided me, and for his many significant contributions to the Foundation’s planning and visioning efforts during our work together. “I told Morris that it was my dream that he and I would ride together to Boston’s South Station on the inaugural run of the first MBTA train to leave the new Pawtucket / Central Falls station. Alas, that dream was not to be, as I learned on the occasion of Morris’s passing [just a short time ago]. No one understood more clearly than Morris, the fundamental importance to the growing arts community in Pawtucket, of a rail connection from our own hometown into the heart of the cultural, artistic, and institutional center of New England. Whenever there is opportunity to do so, in the context of affirming the role of community leadership in the development of the new MBTA station, I will give credit to Morris Nathanson, Jack Partridge, Dan Sullivan, Mike Horan, Vin Ceglie, and others on the Foundation Board whose vision and support made our efforts in those early years not only possible but also ultimately successful.”