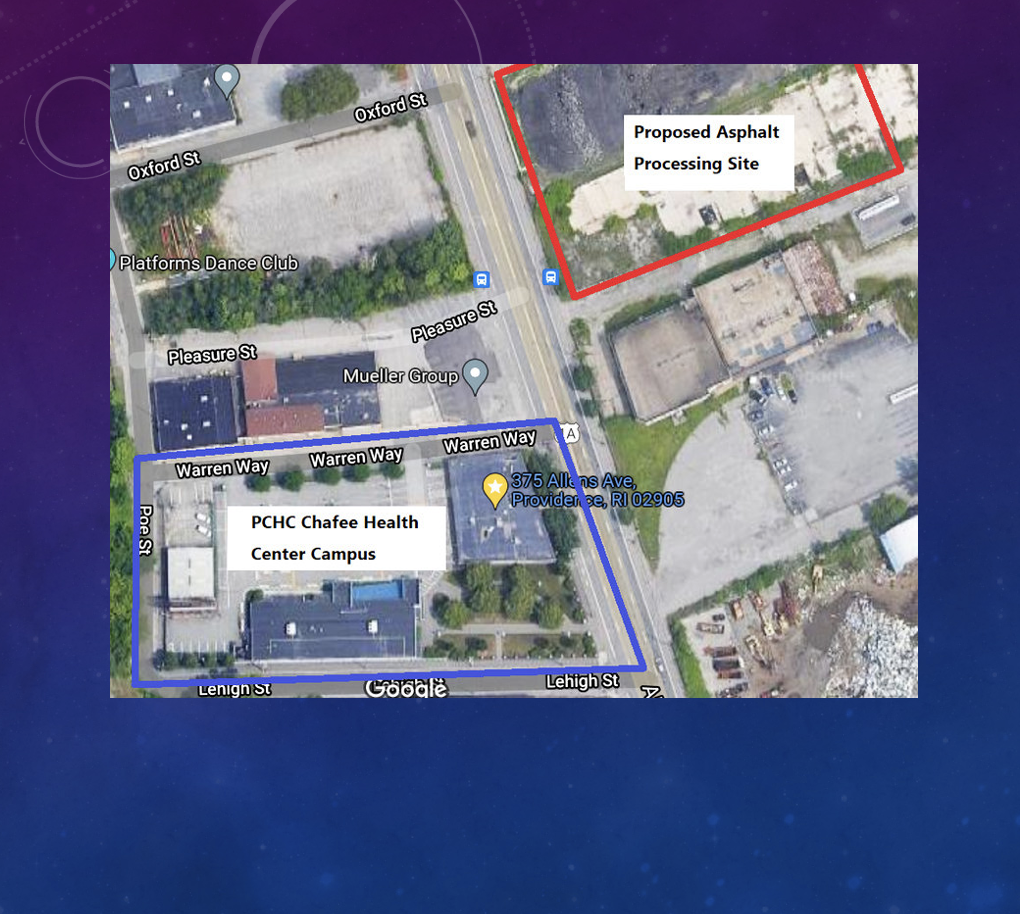 It’s a “no” for asphalt grinding on Atwells Avenue, 250 feet from health center serving 8,000 – Richard Asinof

How a small group of dedicated neighbors upended the best of plans by the Narragansett Improvement Company around a zoning change.

By a 5-0 vote on Wednesday, Oct. 13, the Providence Zoning Board of Review rejected the variance sought by the Narragansett Improvement Company and Cumberland Farms for its property along Allens Avenue and its non-conforming use.

As documented by Steve Ahlquist from Uprise RI, testimony from a number of neighborhood groups, led by Linda Perri, succeeded in preventing the Narragansett Improvement Company from getting the variance it sought.

The most dynamic and convincing testimony against the variance came from Dr. Andrew Saal, MD, MPH, the chief medical officer at Providence Community Health Centers, who used a blow-up of a Google map showing the proximity of the site to the health center clinics as strong visual evidence – only 225 feet away.

Here is the full letter Dr. Saal presented at the hearing:

Good evening members of the planning and zoning committee.

My name is Dr. Andrew Saal. I am a family physician and the Chief Medical Officer of the Providence Community Health Centers.

With ten neighborhood clinics across Providence, PCHC has over 600 employees and serves 60,000 patients. But this evening I am speaking to you as a business neighbor whose office is within 200 feet of the proposed variance at 338 Allens Avenue.

I am also speaking to you on behalf of the health center that is located only 225 feet from the proposed zone. I would like to remind the zoning committee that there is a community health center off Allens Avenue on Warren Way. The PCHC- Chafee Health Center, located 225 feet from this proposed industrial zone, is the medical home of 8,000 men, women, and children. This health center has 2,500 children under the age of 18 and welcomes over 200 newborns every year.

As others have mentioned, the Washington Park and South Providence neighborhoods have some of the highest rates of asthma and lung disease in the city. The Chafee Health Center is where many of them receive care. Many of them take the bus – the closest stop is directly adjacent to the proposed variance zone – ground zero for dust, exhaust, and petrochemical residues.

Just over 400 people at the Chafee Health Center have a diagnosis with asthma. PCHC is one of the only community health centers in the nation with two full-time asthma specialists. Having those specialists on our staff is not by design, it has been out of necessity.

But our clinics serving Washington Park and South Providence had 39 children admitted to the hospital for asthma. Many of those children call the Chafee Health Center their medical home… just 225 feet away from this proposed grinding operation.

Hi neighbor, have a…

I am also speaking to you this evening as an immediate neighbor within 200 feet of the proposed site. PCHC has 30 employees directly across the street at 375 Allens Ave., and another 30 employees in the clinic building adjacent to that.

Throughout the pandemic we have increased the HVAC units for each building to almost 10 air exchanges per hour. Though each HVAC unit is equipped with high-performance MERV-7 air filters, the initial intake of air into each building is unfiltered.

More fresh air exchanges may have reduced the Covid transmission in the offices – but they have also increased the staff complaints about industrial odors from the neighborhood.

As many of you are aware, the asphalt grinding facility at 338 Allens Avenue has been in operation for at least two years. In addition to chronic dust and petroleum odors that our staff regularly report, the grinding has also had some highly visible downwind effects.

On Aug. 26, 2019, a smelly white shroud crossed the street and left a tar-like residue on the cars belonging to the PCHC employees and patients of the health center. The residue was described as sticky, gritty, oily, and smelling of tar. Nearly 50 staff discovered that their vehicles were coated with a tarry substance that could not be removed through conventional washing.

By the following day, our facilities manager had contacted the responsible parties and the asphalt grinding was stopped. We would like to thank the Narragansett Improvement Company for taking responsibility for the mishap and agreeing to have some 40 PCHC employee vehicles cleaned with a solvent and then power-washed to remove the asphalt residue.

And while most were thankful that the harmful soot could eventually be washed off their vehicles with solvents, more than a few asked a more profound question: “Oh my God, did we breathe that same cloud?” The answer, sadly, is yes. Yes, we did. And there is no power-wash or solvent to remove that from our lungs.

On behalf of the sixty PCHC employees and the 8,000 women, men, and children who receive medical care less than 250 feet away, I urge you to vote no on this variance.

To read the article in its entirety at ConvergenceRI, go to: http://newsletter.convergenceri.com/stories/time-has-come-today,6838