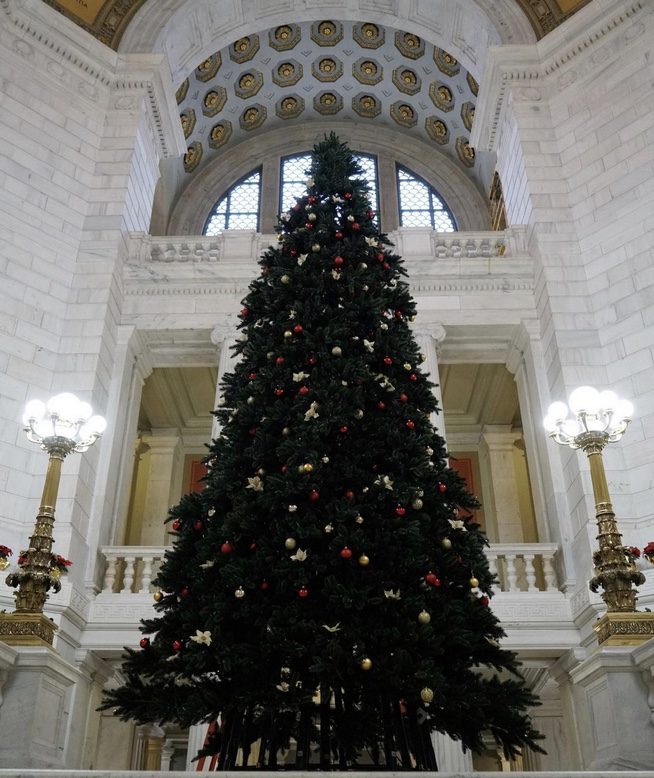 It’s a #FakeTree for the RI State House

Photos of the Christmas Tree, resplendent in the rotunda of the Rhode Island State House, led one to believe we finally, finally  got it right. It looks really alive  – bright green. Amazingly symmetrical, too. Then the news came – don’t look too close – it’s not a real, fresh tree, but an artificial one.

The decision made after several botched years of trees dying, losing their needles all over the white marble floors and steps, and being replaced more than once, with smaller, though more resilient trees. And then there was the blue tree – all lit in only blue lights – thought to be either a nod to Hanukkah or the Democratic party.

So this year it is beautiful – awaiting an official lighting with a flick of a switch on Wednesday, December 4th, at 5pm.

The cost for the #FakeTree was approximately $6500, and was mail ordered from Balsam Hill. The funds used to purchase the tree were leftover funds from a 2017 National Association of Governors gathering.

When asked if she thought the decision to go artificial would catch some ire, the Governor acknowledged that it would. She offered a further explanation that there may be an opportunity to put a real one outside, but the #FakeTree goes in the rotunda this year. The Governor’s explanation of the problem of how difficult it is to keep a real tree alive and healthy for a month in an old over-heated building does resonate as logical reasoning for an artificial tree.

However, there was quick outrage from Tim Leyden, the spokesperson of the RI Christmas Tree Growers Association, and of the famous Big John Leyden’s Christmas Tree Farm, with pop-up tree sales all over the state. Leyden said on numerous radio comments, “putting an artificial tree at the state house is a slap in the face and a turning your back to the Rhode Island’s Christmas Tree Growers”. Several weeks ago, RINewsToday did a story about tagging and getting a real tree and how the tree farms are still suffering from the economic recession of more than a decade ago.

All we can say is this:

Your boughs so green in summertime
Stay bravely green in wintertime
O Tannenbaum, O Christmas tree
How lovely are thy branches

“O Christmas Tree” was really “O Fir Tree”, and is a German song that later became associated with Christmas in the early 20th century.  It was actually meant to compare a faithful lover with an unfaithful lover.  Kind of fitting.

If you have a tree(s) in your home, what will you choose?