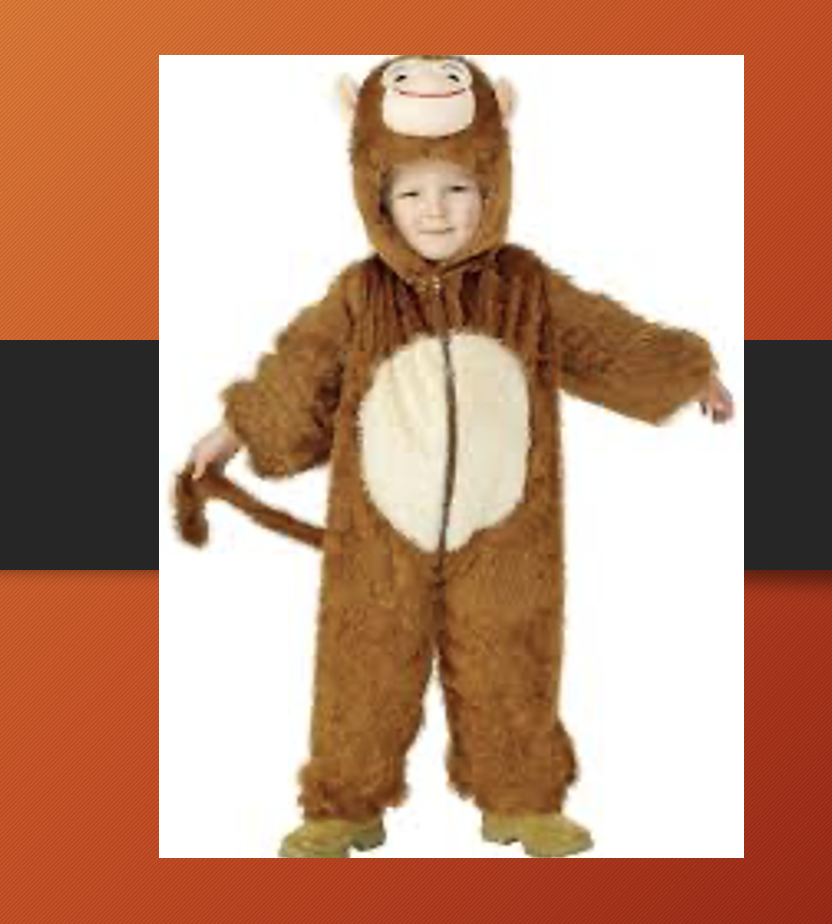 I’m four or five, ready to go. My first real costume is on – and has been for hours. It’s a monkey suit, complete with a nice long tail. We got it from Sears, and I can still smell the newness of it, the faint plastic, the elastic that got caught in my hair as I put the mask over my face, the “soft” at the end of the tail. It was a great costume, and a great holiday at my house.

Mom and Dad were lots of fun then, we bought a record called “Spooky Creepy Sounds from the Haunted House,” or something like that, and my dad would run an extension cord out of a window and hide the record player in the bushes and let it go on repeat during the Trick or Treat hours.

A light post sat quietly at the end of our driveway, three-hundred and sixty-four days a year, but on October 31st a scarecrow would lay at the foot of the post. Unsuspecting kids would start for our door, enticed by the creepy sounds coming from the bushes, go to the door, get a spider dropped on them from one of the upstairs windows (cleverly set up with a retractable line) and if they survived and made it to the door, they would be greeted by a ghastly apparition – my mother, sometimes with a stocking over her face and a hooded, leopard velour cape over her head.

Some kids actually managed to get some candy, and it was never the cheesy little bars; we went all out, giving some really good treats, full-sized Reese’s Peanut Butter Cups or Butterfingers; sometimes we would put a few together and wrap them in a baggie, but it was always worth the trip for the neighborhood kids.

Of course, once the trick or treaters bounded down our front steps with their bounty, the “scarecrow” at the lantern would come to life and scare the bejeses out of them. My father could always lie still for hours, and he put that skill to good use come Halloween.

As we got older it was more fun to stay home and enjoy the night rather than run around the neighborhood acting like a bunch of fools, being too old for trick or treating, but too young to be outside after dark.

Dad let us be the scarecrow now and then, and we would fight for the honor. As time went on, people were on to us, but they would still make the trip, parents making sure the new ones got a taste of some real Halloween fun.

It was silly, goofy in a great way, a bit inappropriate at times and completely insane and out of character, but it helped connect us as a family. Now, all these years later, if I happen to see a little monkey suit at Walmart when I get lost in the Halloween aisle I’m right back in time with my parents who live forever in my memories because they were not afraid to let loose now and then, and show their kids how to have a little fun.

Times were different then, parents were authority figures, not to be questioned, and not at all concerned about their kid’s feelings or self-esteem. They raised us the way they saw fit, and nobody would tell them otherwise.

Every year I break out the Leopard Print cape, and feel the softness of it, and pull it over my head and scare the kids who dare come to my door on Halloween. One of these years I might even lie in wait under my lamppost, and play that scratchy old record.

Memories cannot wait, they must be created every day, because we just never know what the future has in store. Life goes on, we go away, but the impressions we make last forever.