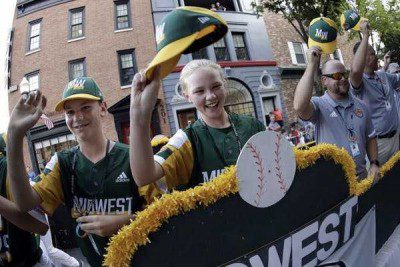 Girls rule the world of sports

It was on June 23, 1972 when President Richard M. Nixon signed Title IX of the Education Amendments of 1972, it was a comprehensive federal law that prohibits discrimination on the basis of sex in any federally funded education program or activity. The objective of Title IX was to avoid the use of federal money to support sex discrimination in education programs, and to provide individual citizens effective protection against those practices. Title IX applies, with a few specific exceptions, to all aspects of federally funded education programs or activities. In additional educational institutions such as colleges, universities and elementary and secondary schools. Title IX also applies to any education or training program operated by a recipient of federal financial assistance…. in other words LET THE GIRLS PLAY!

It took a few years before the rule was taken into full effect (and a few lawsuits along the way), that girls and women were offered the same right to participate in competitive sports as the boys and men were. How the Ladies flourished! Look where they were, being restricted to sports such as track, figure skating, swimming and badminton. The ladies took hold and blew the lid off the bottle that restricted them and look how far they have come- Olympic Gold medals in virtually every sport that were only at one time offered to men. The USA Women’s softball dominated the Olympics for years before the sport was stopped, eliminated, and once again be brought back in the 2020 Olympics. The Women’s Soccer team has been on the World stage even before winning the 2019 World Cup. UCONN women’s basketball has been compared to the old UCLA and Duke men’s teams, winning National Championship after National Championship and being a force in women’s basketball for years.

How the scene has changed, golfers like Michelle Wie, tennis stars like Venus and Selena Williams and soccer stars like Hope Solo have become household names. Race Car driver Danica Patrick drove with the boys in every NASSCAR event for years before deciding to retire and Rhonda Roussey boxed her way to the World Championship before going into other ventures. Watching the WNBA a fan can cheer on their favorite player in huge arenas playing the best of the best on a night in and night out basis. There are many professional teams that are just for women in hockey, soccer, softball. Women have even crossed over to become professional umpires and NFL officials. The have made their mark in the broadcast booth, for both men and women professional sports.

If you think that these women are the exception and not the rule, don’t tell Maddie Freking that she can’t play. Maddie is currently the starting second base (wo)man on this year’s Mid-West regional representative in the Little League World Series. A sport dominated through the years by boys. Maddie is one of 12 girls to play in the boy’s only club, that is the Little League World Series and if you watch her play, it is obvious to see that she is as good if not better than most the players in the tournament. But the fact that she is part of history is not lost on her, she said when it was pointed out that she was one of twelve,” that’s cool, one of twelve? I had no idea; all I want to do is help my team win”. She told an ESPN reporter. Who knows, are we seeing the first female baseball start that may crack the major league baseball ranks? It is going to happen eventually why not Maddie Freking?

It is true that women in sports have come a long way since June 23, 1972, but sadly they still are behind their male counterparts, in opportunities and salary. But the ladies are gaining ground little by little and over the next few months this sports section of RITodaysNews.com will have articles focusing on the ladies, where they are now and where are they heading. How competitive travel AAU teams for basketball, softball, soccer, volleyball and Lacrosse have become commonplace but what’s on the horizon for them? In the 47 years since Title IX became a reality and girls emerged onto the sport scene, they came a long way, but they only scratched the surface!