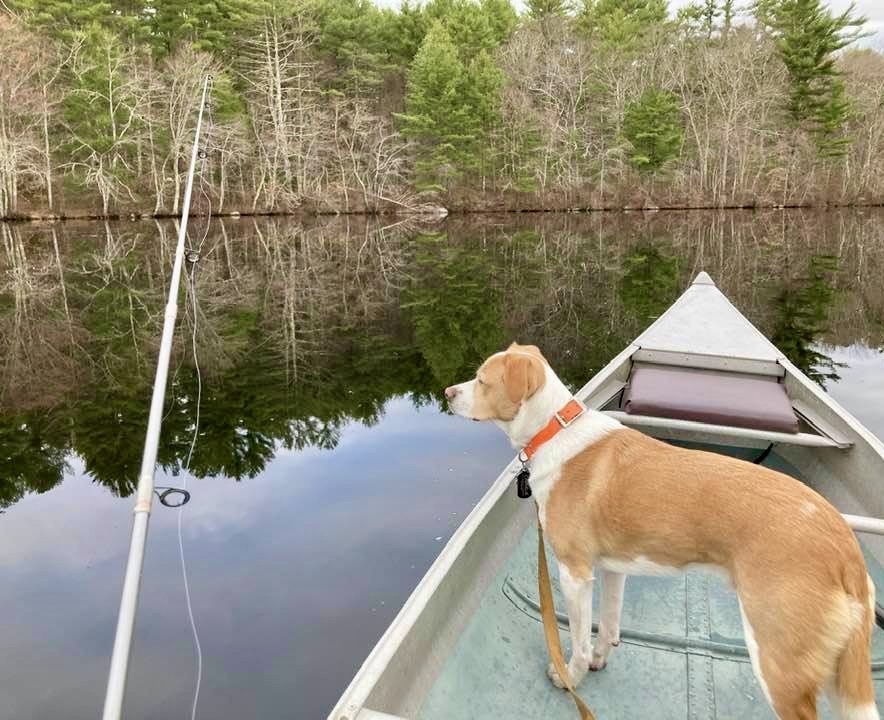 The delightful weather Little Rhody had been enjoying should have had a direct impact on the Trout fishing. It did not.

While some are still catching some trophy Trout in the 5-8 lb. range, some bright and sunny days were quiet in the evening. It appears that mornings are the best right now. as a large number of people were fishing Shippee Saw Mill Pond, including myself for three nights in a row and the only person catching any Trout was a guy using junk food on the bottom.

People fishing the Pawtuxet River in Hope were quiet as well during the evening. That said, a lifelong friend, Buddy Jackson, did well in the morning at the beginning of this week at Breakheart Pond.  Buddy also noted that weeds are overgrowing the pond again and that was confirmed by Tom Joyal, as well. Tom did well at daybreak on the same pond, though his loyal companion, “Charlie” wasn’t too thrilled with getting up at 4 am.

It is noted there are a lot of Kayaks, Canoes, and Jon boats in use.

Tip #1 – If you trailer a Jon boat, tie the bow down with a piece of heavy rope or chain. If the crank strap breaks, the wind will get under the boat and said boat will fly off the trailer. On one of my frequent trips to a Maine camp I witnessed a family towing a 14′ Boston Whaler with a brand new 40hp Yamaha motor and the crank strap broke.  the Whaler lifted off the trailer like a kite flipping upside down in the road and snapped the Yamaha motor in half. The saddest part of the ordeal was the 11-year-old daughter was devastated as the family was looking to go tubing with the boat. Again, a 10′ length of strong rope or chain can keep a vacation what it is supposed to be – “FUN”!

Tip #2 – Along those lines, and this is more directed at the obsessive Massachusetts tailgaters, if there is a vehicle in front of you with a Kayak, Canoe, or boat either on or in the vehicle, give the vehicle plenty of space! IF for some reason that vessel breaks loose, it will go through a windshield like a missile! One will not have time to react if the boat breaks free. This writer has encountered a slew of MA drivers 4-6 feet off the back of his truck in the last 10 days. I also don’t want my boat rear ended!