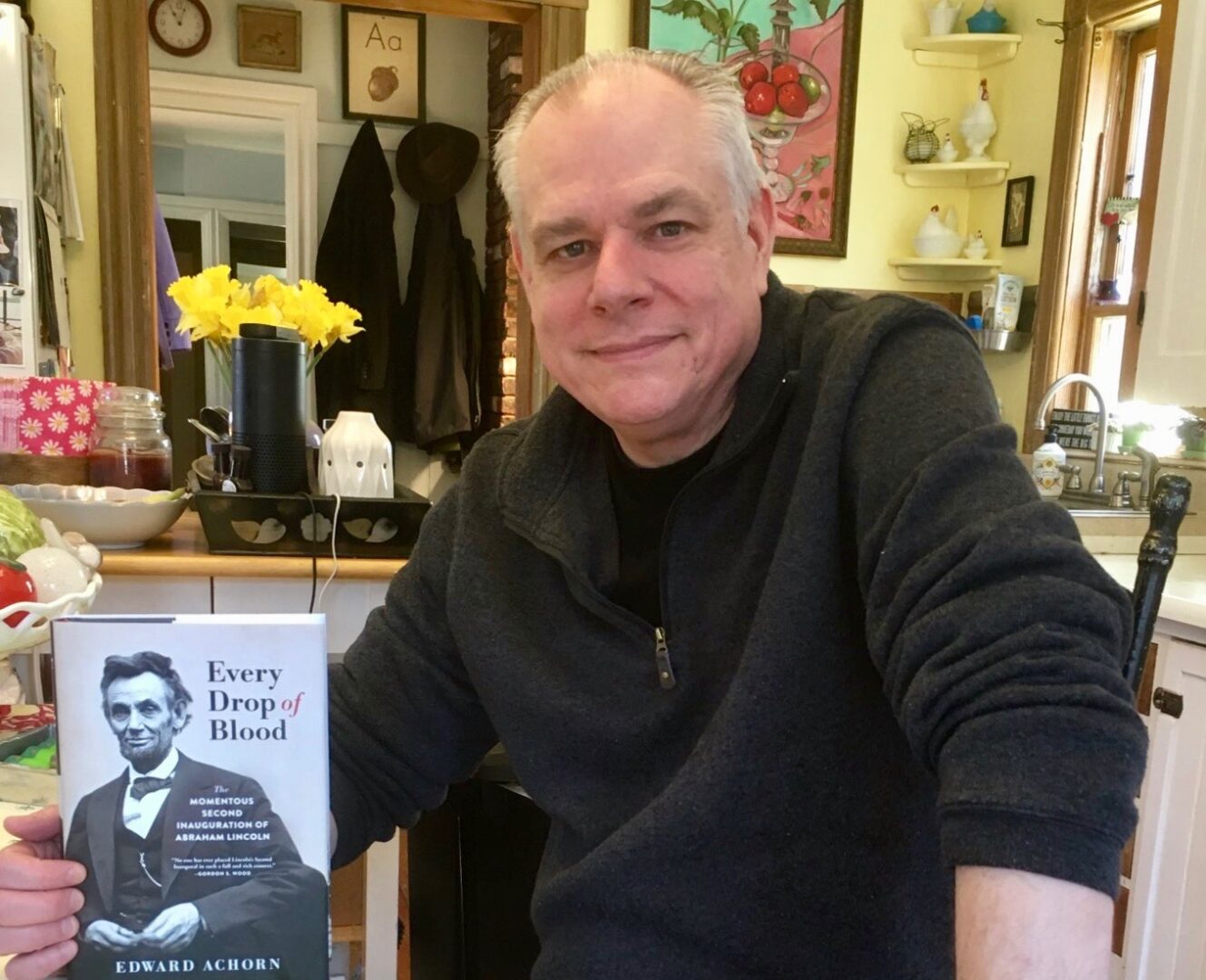 EVERY DROP OF BLOOD – a book by Ed Achorn

“It is hard to imagine anyone saying anything new about Abraham Lincoln, the most written-about figure in American history. But Edward Achorn has done it. No one has ever placed Lincoln’s Second Inaugural in such a full and rich context as he has. Achorn recreates the sights, sounds, smells, and the feel of everything, and his Lincoln was never more real. This is the work of a superb imaginative historian.” – this quote from Gordon S. Wood, Pulitzer Prize-winning author of Empire of Liberty about Providence Journal editor, Ed Achorn’s latest book, EVERY DROP OF BLOOD, The Momentous Second Inauguration of Abraham Lincoln

Lending a new perspective on the Civil War, Edward Achorn’s book breathes life into the tense events surrounding Abraham Lincoln’s second inaugural address. Brilliantly conceived and vividly drawn, Achorn pulls readers into Washington, DC’s polarized inner circles, and into the personal anguish of Lincoln himself—an unpopular, narrowly-elected President determined to end the war and set a course toward healing the nation. Prominent figures and forces circulate around Washington leading up to Lincoln’s second inaugural address, made all the more compelling with the knowledge that within a month of delivering the speech, he would be assassinated.

By March 4, 1865, the Civil War had slaughtered more than 700,000 Americans and left intractable wounds on the nation. After a morning of rain-drenched fury, tens of thousands crowded Washington’s Capitol grounds that day to see Abraham Lincoln take the oath for a second term. As the sun emerged, Lincoln rose to give perhaps the greatest inaugural address in American history, stunning the nation by arguing, in a brief 701 words, that both sides had been wrong, and that the war’s unimaginable horrors—every drop of blood spilled—might well have been God’s just verdict on the national sin of slavery.

Edward Achorn reveals the nation’s capital on that momentous day—with its mud, sewage, and saloons, its prostitutes, spies, reporters, social-climbing spouses and power-hungry politicians—as a microcosm of all the opposing forces that had driven the country apart. A host of characters, unknown and famous, had converged on Washington—from grievously wounded Union colonel Selden Connor in a Washington hospital and the embarrassingly drunk new vice president, Andrew Johnson, to poet-journalist Walt Whitman; from soldiers’ advocate Clara Barton and African American leader and Lincoln critic-turned-admirer Frederick Douglass (who called the speech “a sacred effort”) to conflicted actor John Wilkes Booth—all swirling around the complex figure of Lincoln.

In indelible scenes, Achorn vividly captures the frenzy in the nation’s capital at this crucial moment in America’s history and the tension-filled hope and despair afflicting the country as a whole, soon to be heightened by Lincoln’s assassination. His story offers new understanding of our great national crisis, and echoes down the decades to resonate in our own time.

For anyone in hyper-local Rhode Island who may follow Ed Achorn’s Facebook page, you can sense his delight in the upcoming publication date. Pre-orders may be made now, and we’re sure Ed will be on the signing circuit as well.

“Prize-worthy. Achorn is erudite and empathetic, and the book is chock-full of information and telling insights. Achorn sets the scene for the greatest inaugural address in American history.” —Frank J. Williams, founder of The Lincoln Forum and author of Judging Lincoln

“A magisterial analysis not only of Lincoln’s second inaugural but of the context in which it was given. Achorn’s keen eye for the meaningful detail reveals new layers of meaning to both a familiar speech and the divided nation that received them. His gift for telling a good story makes it a must read for historians and general readers alike.”—Maury Klein, author of Days of Defiance and A Call to Arms

Edward Achorn, a Pulitzer Prize finalist for Commentary and winner of the Yankee Quill Award, is the vice president and editorial pages editor of The Providence Journal. He is the author of two acclaimed books about nineteenth century baseball and American culture, Fifty-nine in ’84 and The Summer of Beer and Whiskey. He lives in an 1840s farmhouse in Rehoboth, Massachusetts.

“The author provides rich description of a wide cast of people, including politicians, poets, soldiers, and nurses . . . Achorn is especially insightful in setting the scene for the inaugural, going deep inside the social world of the capital and remarking on the constant positioning for favor or notice . . . A solid history that will allow readers to feel as if they are in the moment.”—Library Journal

“This richly detailed account of the events surrounding Lincoln’s second inaugural address focuses on the many notable and obscure personalities present in Washington as the Civil War neared its end, including such opposites as Frederick Douglass and John Wilkes Booth, whose lives intersected with Lincoln’s in dramatically contrasting ways.”—James M. McPherson, Pulitzer Prize-winning author of Battle Cry of Freedom