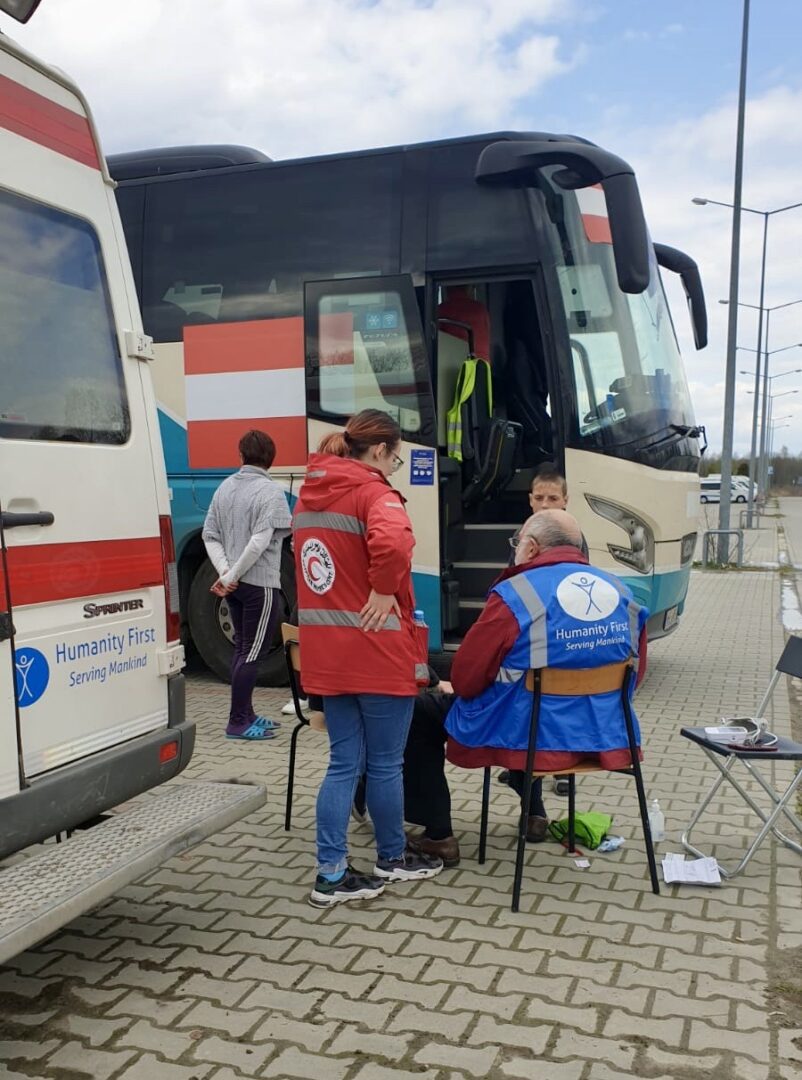 Thursday, we met ten buses carrying 450 people who had left Kyiv the night before and were on their way to Berlin. Apparently, Poland is having trouble handling the number of people who have arrived from Ukraine, and they are looking for other countries to take refugees directly (many have come through Poland on their way elsewhere, but the numbers are taxing the Polish infrastructure and economy)

The people on the buses were from all over Ukraine but mostly conflict zones — Kharkiv, Donesk, Lutesk, and many other places. Many had been living in shelters or basements for weeks. There were mothers with children and many older people, but no able bodied men of fighting age. Some were amputees. I’ll never forget seeing a legless man climbing down the steps of the bus by himself after he’d flung his wheelchair down those steps. Then he lowered himself into the chair from the bus-steps and spun the wheelchair about, and went off to find a toilet, some dinner, and have a smoke.

There were a number of older people who wore diapers and had to be carried off the bus and were changed by volunteers. And lots of kids.

One bus had eight people lying on mattresses in spaces created when the seats were removed.  They lay on mattresses because of health problems — people with hip fractures, who were hemi or paraplegic after strokes or trauma, and some with cerebral palsy. The three nurses who were with them worked hard but were overwhelmed with work. They reported no problems with their patients. Then my UK colleague figured out the people on the mattresses were laying in their own excrement and all needed to be changed. And changed many of them herself…

Our job was to evaluate everyone in the buses and make sure all were medically stable enough to make the ten to twelve hour trip to Berlin, and to help make people as comfortable as possible for the trip. I’m happy to report the buses made it to Berlin without incident.

But being on those buses and walking the aisles among the many tired people so tightly packed and seeing and talking to these people — that is also an experience I’ll never forget. These were mostly poor and working people. The old women had swollen knuckles and shriveled sunburned skin and wore babushkas.  The children sat quietly, pensively after their long trip, their eyes watching everything and their heads alert, as if still listening out for artillery fire or exploding missiles. Their mothers watched them carefully, but you could also see the anxiety in their eyes. They talked about the husbands they’d left behind: some to fight, some to look out for homes and animals, and all needed us to give them a little medicine so they could sleep on the rest of the trip, so they could be awake when they got to Germany and would have decisions to make.

The faces on those buses, crowded together, pensive, resilient, brave and proud were a human portrait, a human moment, the sum of everywhere we have been and what we have done. Kind of a Noah’s Ark, of people surviving the flood together, and waiting for the waters to recede.

We have made a world together, a world where people can be together and take care of each other and even hope together. But it is also a world with paroxysms of violence and war, where we rip apart all we have built and destroy the safety and security for some but also a certain kind of hope for all. Perhaps that hope gets rebuilt person by person. Perhaps. By I think it takes more than that, and that hope, and security doesn’t get meaningfully rebuilt until all of us are engaged and part of that.

Many people have said kind things about the people who are here, and I appreciate that. But everyone here helping on the border says the same thing. We are all here because we felt like we had no choice but to come. We are just taking our turn. There is no perceivable risk, at the moment, though that could change if the political situation changes. But any risk is insignificant, compared to what the Ukrainian people are enduring, and what they are risking to defend democracy.

But they need everyone to stand with them.