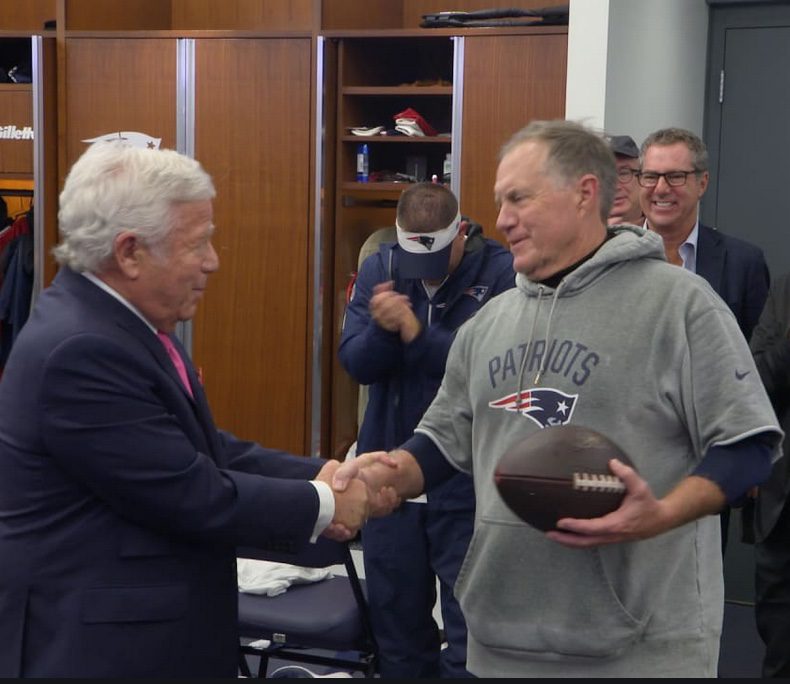 Better days are coming – sooner than you think – be patient

After 20 successful seasons the fans are now starting to jump off the Patriots band wagon. Why? Because they aren’t going to the Super Bowl; or, because Brady is too old, and he is done? Or they need to rebuild; and that will take years; or, choose any reason why and that’s what the Patriots fans are going with. Ahh, New England professional sports fans, you gotta love ‘em. They ride the wave for all it’s worth when their team is on top, but the first sign of trouble, well, they can’t throw people under the bus fast enough!

As a lifelong Patriots fan here are some observations.

Okay, let’s start at the top. No, not Bill Belichick; the very top, Robert and Jonathan Kraft. The money behind the machine. They came in and took over a franchise that was all but moving out of the New England region.

Remember when the Patriots were rumored to be going to any other city in the United States? Do we forget the jokes of the owners that we the fans of New England had to put up with? The Sullivan family that could screw up anything and everything? The same family that had the world’s biggest entertainer, Michael Jackson, at the height of his popularity, go on tour and they lost their shirts? They had to sell the team just to get out of debt. They weren’t very good at virtually anything. They took an NFL franchise and ran it like a Mom and Pop operation.

Then the razor blade magnet, Victor Kiam bailed out the Sullivans just to introduce a new level of incompetence in owning an NFL franchise. He did however keep the Patriots from becoming the Tennessee Tuxedos, so progress!

Enter the Krafts – Robert and his son Jonathan, who brought their blueprint of how to run a successful company, by winning and making a lot of money and giving back in return what the New England region had always wanted – a REAL NFL team.

For too long the New England fans watched as other teams won championships. We watched as Dallas, Pittsburgh, San Francisco, Miami, and Green Bay ruled the NFL. How we longed for a championship winning team. But we had the Patriots, who were known throughout the league as the “Patsies” a virtual easy win on the schedule of every NFL team in the league.

The team did manage to make it to a Super Bowl where they were embarrassed by the Chicago Bears and they super bowl shuffled the Patriots in a 42-10 blowout. The Krafts purchased the team and set out to change all that and boy did they change it!

They brought in Bill Parcells at the height of his coaching career and came in and changed everything, starting with the team’s logo. He dumped Pat the Patriot and introduced us to the Flying Elvis. The Patriots under Parcells even made it to their second Super Bowl, but the result was similar to the first venture, a blowout loss to Brett Favre and the Green Bay Packers, but the Patriots were going into the right direction.

It wasn’t until after a couple of coaching changes the Patriots hired Bill Belichick and 20 years and 6 Super Bowl Championships later, the Kraft’s are on top of the NFL world, and everything was coming up roses for the Kraft family and the New England Patriots, well until this season.

During the 2018-19 Super Championship run, Robert found himself in the headlines for visiting an Asian Spa where what may or may not have happened there remains to be decided. The football fans of New England didn’t seem to care because they just won the 6th Super Bowl. But it was at that moment the glitter started to come off the Kraft family and their patriarch in New England. This was a scandal that happened at the very top of the organization and up until that time nobody ever questioned Robert Kraft on…well… anything.

Enter the 2019-2020 season, fresh off the Super Bowl championship (and the still unresolved Spa scandal), Kraft has been involved in the team’s personnel matters, which very rarely has ever happened, more notably the Antonio Brown mess. This caused the faithful in Patriots Nation to point the finger at Robert Kraft for not getting Tom Brady and Belichick “the weapons” they needed to secure championship #7.

The main thing about Robert and Jonathan Kraft is that they have been and are smart, successful businessmen. No decision that they ever made was a quick, “by the seat of their pants” impulse. It has been meticulously thought out and evaluated several times before the final decision is made. The Patriots faithful must realize that the team ownership is in great hands, and there are reasons why choices were not made at the ownership level, no matter how much the fans wanted it.

As far as the ownership goes, they are first and foremost businesspeople, and they will base their decisions on the team on how it will enhance the BUSINESS. What the Patriots fan base has to understand is that sometimes you need to take a few steps backwards to go forward. The ownership and management of the Patriots will get an “A” for this season, because of their track record and because they have been too successful to start failing now. Remember these are the Krafts – and not the Sullivans.

Let us admit that Coach “B” is not a very warm and fuzzy type of coach and let’s remember who has held that position and failed miserably. How can we forget Chuck Fairbanks, Raymond Berry Rod Rust, or Pete Carroll (pre-Seattle)? Or the one who showed us what a successful coach was, but his ego got in the way – sorry, Bill Parcells. Bill Belichick has become what is considered by many to be the greatest football coach of all time. Move over Coach Hallas, Lombardi, Shula, Knoll, Walsh and Landry, although you all had great careers as coaches, sorry to say they pale compared to Bill Belichick.

Belichick started out like most coaches as a special team’s coach to Parcells for the New York Giants. The son of a coach, Bill had a keen insight to the game. He progressed to defensive coordinator and his big chance came when he was named the Cleveland Browns head coach (imagine what could have been for the Browns if they let Bill be Bill). The Cleveland Browns ended up firing what was going to be considered by many as the greatest coach of all time; that’s all you need to know about the Cleveland Browns. The Patriots ended up “stealing” Belichick from the New York Jets. Well after giving up a first-round draft pick to lock in the coach, the Patriots haven’t looked back, until this past season.

Other than the fact that the Coach is less than entertaining and forthcoming when addressing the media about the team (remember this is a coach who has led his Patriots teams to 6 wins out of 9 appearances in Super Bowls, 9 AFC Championships, and countless AFC East division championships). His “we have to play better, coach better, execute better, make more plays” standard statement after a Patriots loss has become media fodder. Interviews are like pulling teeth and painful to watch. Unless he wins the Super Bowl and he makes the Late-Night Talk show tour, then he becomes this funny, engaging person that will talk your ear off. This is a coach who gives you nothing for opponents to put up on their bulletin boards. Well with one exception that will always be a footnote to his brilliant career, – “SPY GATE”.

Who took the biggest hit to his reputation was no other than Coach Belichick. For 20 years the coach has been unquestioned by the fans, until this season. Speculation has been “the coach doesn’t care”, “he’s leaving for another team”, “he and Brady don’t like each other”, “he’s leaving for a pre-game gig”. The fact is that Bill Belichick has built this dynasty with the support and blessing of the Kraft family, and with a few bumps in the road it has been a very smooth and successful ride for everyone. Keep in mind that many of Belichick’s assistant coaches end up as head coaches elsewhere, so he is constantly revamping his coaching staff, and still ending up on top.

It does not make any sense for the coach to leave what he has built in New England and at 67 years old, to go and start all over again. He has been at the helm in New England for 20 years, he is a fixture on the New England sports scene like Red Auerbach, Bobby Orr, and Ted Williams. The great coaches just don’t get up and leave their organization that they created because they are needed to go prove that they can do it again. The true legends of coaches such as Tom Landry, Chuck Knoll, Don Shula and George Hallas stayed coaching their team until they retired and never coached again, and they were considered the best of all time.

Belichick is in that same class, as a matter of fact, he is now the head of the class! The 2019-20 season was probably one of the coaches greatest coaching seasons, going into the season with limited offensive weapons, the coach built up the Patriots defense, to the point where the best offense was the best defense and that carried the Patriots into the playoffs on an “off year”. The coach and his staff earned a A+ for the season; it was one of their best seasons as coaches in their many years in New England, and if history (which Coach Belichick is a student of) has taught us is that the coach will learn, adjust, and come back even stronger! Sorry to the rest of the NFL’s 31 teams, but the Coach isn’t going anywhere soon!

Part 2 – Tom Brady and the future.