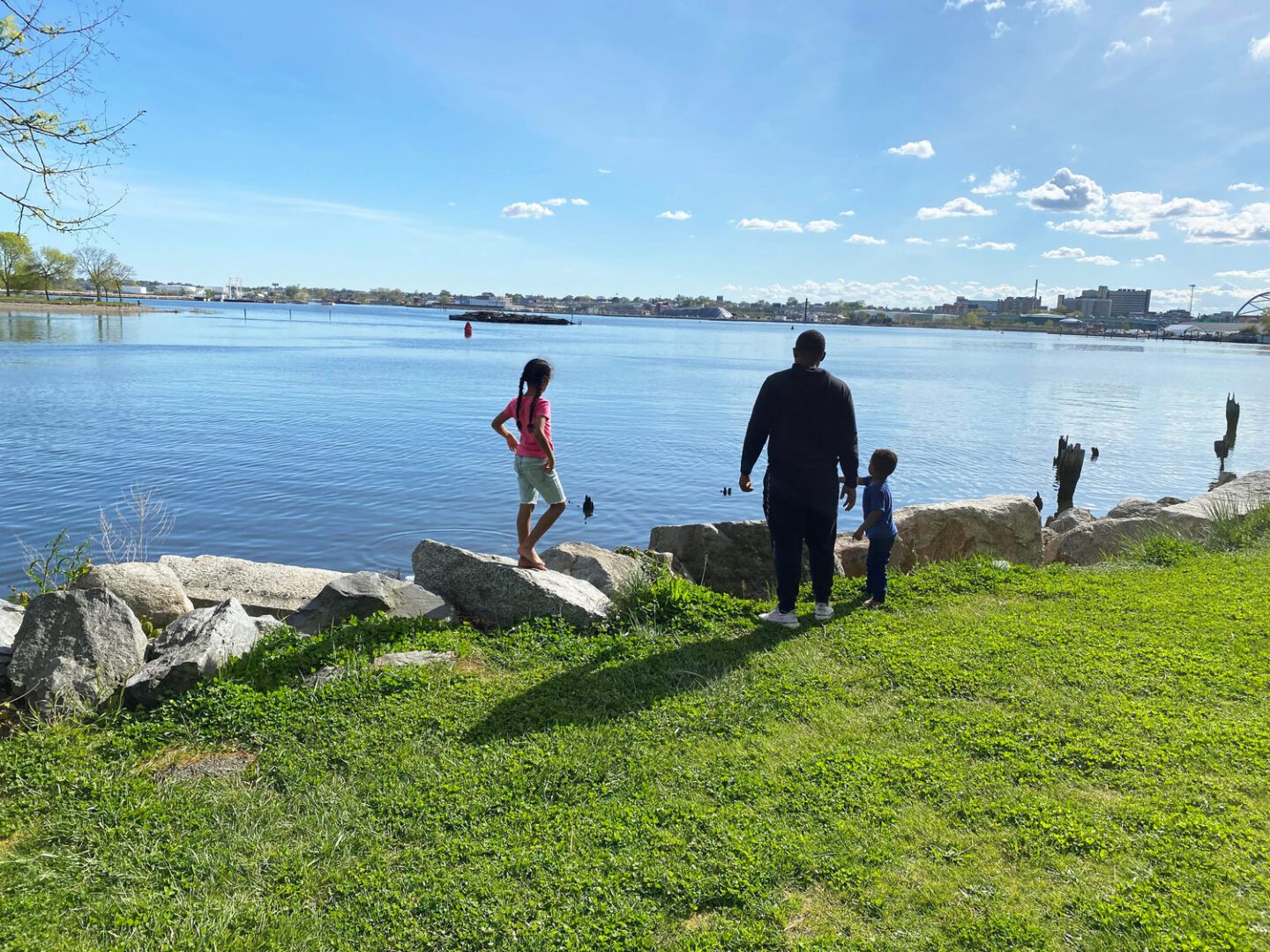 Thankfully, I am not the only one asking questions about this hot new economic engine known as the “Blue Economy.” Douglas J, McCauley, professor of Ocean Science at the University of California Santa Barbara, and the director of the Benioff Ocean Initiative, recently shared a similar view, one that pointed out how this economic engine looks beyond the waters of Rhode Island.

Here are some excerpts from a piece McCauley wrote in the March 15 issue of The Guardian, entitled, “As the ocean industrial revolution gains pace, the need for protection is urgent.”

“The ocean is often seen as the last wild frontier: a vast and empty blue wilderness where waves, whales and albatrosses rule,” McCauley wrote. “This is no longer true. Unnoticed by many, a new industrial revolution is unfolding in our seas. The last several decades have seen exponential growth in new marine industries. This includes expansion of offshore oil and gas, but also exponential growth of offshore renewables, such as wind and tidal energy.”

McCauley continued: “Aquaculture, or farming underwater, is one of the world’s fastest growing food sectors. Fishing occurs across more than half of our ocean. More than one million kilometers of undersea data cables crisscross the high seas. And our ocean highways carry about 1,600 percent more cargo on ships than they did in the 1980s.”

McCauley described the new industries lining up to take advantage of what he called a booming ocean economy:“Companies are jockeying to start ocean mining in the Pacific; new experimental fisheries are targeting deep ocean life previously thought impossible to catch [and even easier to wipe out as in those cold low light regions animals breed very slowly]; and geo-engineering ventures are looking to operate in the ocean.”

McCauley then referenced the importance of a new U.N. treaty that was finalized in March. The treaty, McCauley wrote, “will dictate the future of the single biggest piece of our ocean and our planet: the high seas. Encompassing all waters 200 nautical miles beyond nations’ shorelines, the high seas cover two-thirds of the ocean.” McCauley argued: “This vast expanse belongs to us all.”

[Editor’s Note: And, our oceans are awash in plastic debris. Rebecca Altman recently co-authored a piece for the Atlantic with Tridibesh Dey, “The world has one big chance to fix plastics,” in The Atlantic, exploring the opportunity created by the United Nations Environmental Assembly passing a resolution mandating the creation of a multilateral treaty to address plastic pollution.”]

The scourge of deep-sea mining
An earlier story published by The Observer, in a special report written by Robin McKie, the science and environmental editor for The Observer, from Aug. 29, 2021, entitled, “Is deep-sea mining a cure for the climate crisis or a curse,” attempted to shine a spotlight on the mining of what is known as “polymetallic nodules” from the ocean floor.

McKie’s story began: “In a display cabinet in the recently opened Our Broken Planet exhibition in London’s Natural History Museum, curators have placed a small nugget of dark material covered with faint indentations. The blackened lump could easily be mistaken for coal. Its true nature is much more intriguing, however.”

McKie continued: “The nugget is a polymetallic nodule and oceanographers have discovered trillions of them litter Earth’s ocean floors. Each is rich in manganese, nickel, cobalt and copper, some of the most important ingredients for making the electric cars, wind turbines and solar panels that we need to replace the carbon-emitting lorries, power plants and factories now.”

McKie then warned of the potential harmful consequences of deep-sea mining. “[Some] say mining deep-sea nodules would be catastrophic for our already stressed, plastic-ridden, overheated oceans. Delicate, long-living denizens of the deep – polychaete worms, sea cucumbers, corals, and squid – would be obliterated by dredging. At the same time, plumes of sediments, laced with toxic metals, would be sent spiraling upwards to poison marine food-chains.”

Calculating the value of RI’s Blue Economy
In March of 2020, the University of Rhode Island Graduate School of Oceanography and SeaGrant Rhode Island put together an 86-page report, “The Value of Rhode Island’s Blue Economy, which set some ambitious metrics for the state to achieve over the next 10 years. [See link below to ConvergenceRI story, “What are you willing to bet on the Blue Economy?”]

In turn, the Rhode Island Blue Economy Technology Cluster, in its proposal for federal funding from the U.S. Commerce Department’s Economic Development Agency Build Back Better Regional Challenge [in which it was successful in securing an initial $500,000 grant], defined the strategic economic goals of the cluster as follows: “The RI BETC aims for ambitious but achievable targets, based on international Blue Economy benchmarks from jurisdictions such as Denmark, the Netherlands, and Portugal. Namely we aim over the next 10 years to reach up to 5X growth in Gross Regional Product [GRP] and up to 6X- 8X faster job growth in jobs in this sector over the economy-wide baseline.”

The report continued, in its dense economic prose: “The Component Projects have the potential to transform Rhode Island’s Blue Economy and nearly double its size, with up to 54,000 additional Blue Economy jobs, with a projected annual Blue Economy GRP of $15-25 billion within 10 years. In addition, the growth of Blue Economy in Rhode Island will create additional multiplier jobs in related industries across Southern New England.”

Further, the report put forth an optimistic economic projection of a bright future being driven by the state’s Blue Economy. The current state of Rhode Island’s Blue Economy, the report said, “supports approximately $5.0 billion in sectoral output, ~9 percent of RI’s total GRP and employs approximately 67,600 people [12 percent of the workforce].”

A few observations
The expectation that the Blue Economy in Rhode Island will become a $20 billion sector in 10 years is a bit unrealistic, in my opinion. The hot, high-wage growth sectors make up no more than 2.4 percent of employment in Rhode Island, while tourism, with limited room for expansion [there is only so much coastline and nearly everything is already developed or preserved] is nearly 10 percent of employment.

I would also point out that, according to CommerceRI’s Innovation 2.0 report, some of these ocean-oriented, high-tech sectors increased jobs slower than the rest of the state’s economy between 2014 and 2019.

Maybe the wind turbine industry will go nuts, if the Democrats win the next set of elections. But, if the Republican win, offshore wind may go into a prolonged slump.

Among the questions to ask are: Do we really think we get good value building more over-priced Navy ships and nuclear submarines? What happens to the economy if they actually get used?

And, if we get smart and realize that deep-sea nodule mining is a death spiral for the planet, the 2.6 percent of Rhode Island employment in the non-tourist sectors of the Blue Economy are not going to be growing by 6 percent a year [the Rhode Island economy grows, on average, about 70 percent of the national average – or less than 2 percent a year over the long term].

Actually, if tourism grows slower than the other parts of the Blue Economy, the high-tech components would have to grow 10 percent a year to match the employment projections in the report – and considerably faster than that in order to create a $14 billion sector from the $1-2 billion sector that it is today.

Translated, it would mean that tourism would have to grow from $4 billion to $15 billion in 10 years in order for all the projections to add up.

Sailing into a sea of unintended consequences
Within the development of the Blue Economy in Rhode Island, the economic development nonprofit, 401 Tech Bridge, plays an important role as a catalyst – what their website describes as serving as a “super connector” for companies and technologies: “401 Tech Bridge, a non-profit economic development organization, serves as a super-connector for companies that are developing leading-edge advanced materials, technologies, and products, enabling business growth, and speeding the process of finding commercial and dual-use applications for technologies.”

401 Tech Bridge, the website continued, describing its matchmaker function, “was the first entity to partner with the NavalX Tech Bridge initiative, and our collaboration is now a national model. We are the hub for NavalX North East Tech Bridge activities, building partnerships to innovate in the Navy’s focus areas: maritime composites and textiles, undersea vehicles, sensors, and technologies.”

The 401 Tech Bridge collaborative model, the website continued, “serves as a model for our relationships with other defense agencies, the federal labs and large companies innovating national defense, infrastructure, and health care.”

The connectivity of 401 Tech Bridge extends to supporting the creation of an accelerator program for new startups in the Blue Economy. As the website described it, “401 Tech Bridge and MassChallenge partnered to create a Blue Tech startup accelerator program to expand the region’s ocean-based economy, particularly in the undersea, maritime, and offshore energy sectors. We identify high tech and high potential young companies that are developing products and technology with commercial, government and defense potential.”

A different, perhaps more cynical way of looking at the catalytic role of 401 Tech Bridge is to see it as a way to attract federal academic research dollars and wed it to private equity investments on technologies such as underwater submersibles. But, what are the unintended consequences of how deep underwater submersibles facilitate the mining of nodules deep under the oceans, with the potential of such mining to destroy vast ecosystems we are just learning about?

What’s missing from the narrative?
When talking about the potential for the Blue Economy to serve as an economic engine to propel Rhode Island into the next wave of prosperity, what seems to get left out of the conversation are discussions around sustainability principles.

From the scourge of microplastics and plastic nurdles in our ocean waters to the severe decline of fisheries, from ongoing climate catastrophes, including the melting of ice caps in the polar regions and the increasing frequency of severe weather events, such problems have not yet become part of the narrative around the Blue Economy.

The front lines of the conflict can be found in South Providence, focused on the battles by community residents over the proposed expansion of fossil fuel infrastructure in the Port of Providence – with the environmental burden falling most heavily on poorer communities of color.

Carini continued: “Despite progress being made on this fragile front [of environmental justice], the protection of the environment, public health, and people’s well being are still accessory concerns – the evidence backed up from Allens Avenue in Providence to the Amazon rainforest in Brazil.”

Further, Carini wrote: “From Davol Square to the north and Washington Park to the south, the area [traversed by Allens Avenue] is or has been home to dilapidated buildings tagged with graffiti, mountains of scrap metal, illegally piled asphalt, mounds of coal, liquefied natural gas and propane storage tanks, a Shell terminal, chain-linked fences topped with barbed wire, vacant and neglected properties trashed with all sorts of debris, and a buffet of stored chemicals, many of them combustible and/or toxic.”]

Translated, this toxic landscape gets completely left out of the narrative surrounding the Blue Economy in Rhode Island.

What are willing to bet on the blue economy?