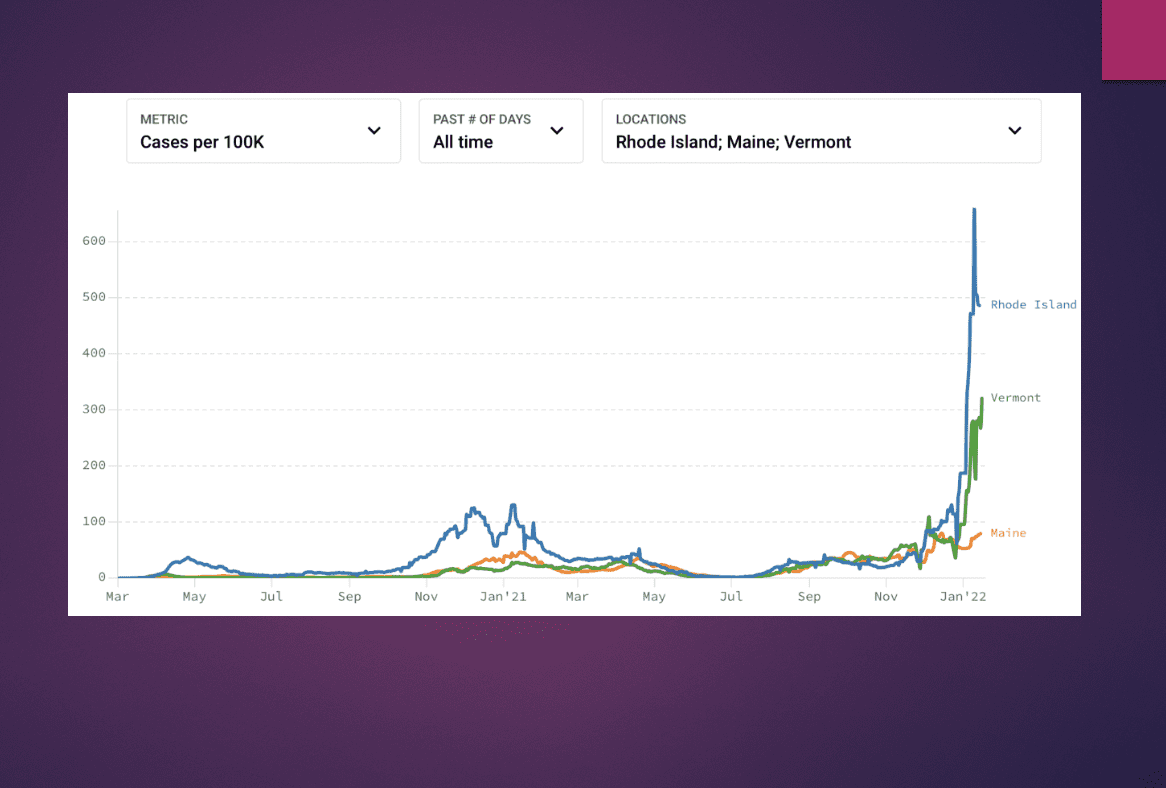 “Why is Rhode Island doing so badly in handling the COVID pandemic?” – Nick Landekic

We are currently experiencing a staggering 486 new cases per 100,000 population per day. No other state in the U.S. has over 400/100,000 cases per day. Our rate of new COVID cases is 45% higher than the next highest state. 4,725 new cases were reported on January 14. For the past two weeks the number of COVID infections has roughly doubled each week. 499 people are currently hospitalized for COVID, about double over a month ago. 3,175 Rhode Islanders have died of COVID to date.

Since March 1, 2020 Rhode Island has been in a condition of High, Very High, or Extreme Infection Risk 78% of the time. This means that almost 80% of the time over the past two years, it has been risky to venture out of your home in Rhode Island.

Rhode Island was the most highly infected place on Earth last December 2020, when the infection rate reached 122/100,000 cases/day. Other than the click value of the headline ‘most infected place on Earth’, the current rate of new COVID cases is more than four times higher now than it was then. Some projections predict that 1/3 to 1/2 of the people of Rhode Island may become infected with Omicron over the next few weeks. At the current rate of new cases, the state appears to be on track for reaching that grim milestone.

Why has Rhode Island done so badly in responding to the pandemic, not only right now but since the beginning of the crisis? Two reasons sometimes mentioned are age and population density.

Age: Rhode Island is the 5th Youngest State in New England, Not the Oldest

Having an ‘older population’ does not seem to explain Rhode Island’s poor management of the pandemic.

The reservoir of the COVID virus is other people. Infection spreads when people gather closely together, particularly unmasked and indoors. Densely populated areas bring a greater probability of close interactions with other people, and thus risk of infection.

Rhode Island is the smallest state in the country. Its size is so small that it might be more valid to think if Rhode Island as a ‘metropolitan area, rather than a ‘state’ for comparison with other places. Considered this way, there are a number of metropolitan areas in the U.S. with both higher population density, and lower rates of COVID cases, than Rhode Island:

The state of New Jersey is both more densely populated and has a lower rate of COVID cases than Rhode Island. As but a few examples, the metropolitan areas of New York City, Boston, Philadelphia, Chicago, Detroit, Baltimore, Bridgeport, New Haven all have higher population densities, and lower rates of new COVID cases, than Rhode Island.

Even the New York City metropolitan area, with nearly triple the population density of Rhode Island, manages COVID to a lower rate of new infections.

In fact, 99 out of the top 100 metro areas in the country have lower rates of new COVID cases than Rhode Island, even Miami-Dade in COVID wonderland Florida.

Neither ‘density’ nor a combination of both ‘density and age’ seem to explain Rhode Island’s poor management of the pandemic.

Rhode Island’s poor performance is particularly glaring in being the worst of any state when it comes to both the current rate of COVID cases, and the cumulative number of infections since the start of the pandemic. All 49 other states have done better than Rhode Island in both of these regards – Rhode Island ranks last, 50 out of 50.

In exchange for these sacrifices in health and lives lost, the Rhode Island economy has not benefitted. As measured by growth in Gross Domestic Product (GDP) over the past two years, Rhode Island ranks 41st among the states. 40 states have managed to both hold current infection rates and total infections, and protect their state’s economies, better than Rhode Island.

Why is this happening?

It would be difficult to definitively prove the reasons why Rhode Island has done worse than any other state (and most countries) in managing the pandemic. At this point much of this is speculation and conjecture. Nonetheless, the results stand on their own, and are clear and objective: this is neither a safe nor healthy place to be, nor is the state economy thriving as a result. There are reasons places like Maine have managed to both have the lowest current infection rate and total COVID cases, and have a strong economy at the same time. It would be smart to try and learn from them.

One thing is painfully clear – as public health experts have been saying for some time –it takes more than just vaccination alone to protect health and lives. Rhode Island is one of the most highly vaccinated states in the country (though only 43% have received booster shots). But it’s not enough, because we are also the most infected.

The vaccines are a miracle of modern medicine and work very well to save lives and reduce the risk of severe illness. But they do not significantly reduce the transmission of infection against highly contagious variants like Omicron and Delta.

Several studies have shown that viral loads are similar between vaccinated and unvaccinated individuals. Vaccination is crucial for protecting you from serious illness and death, but vaccinated people can and do spread infection to others.

If we want to reduce infections and deaths, it will take more than just vaccinations. It will take measures that Rhode Island has not excelled at nor embraced.

Our elected state leaders bear part of the responsibility, with a history of missing, late, token, or inadequate actions that have failed to contain the pandemic (and have not helped the economy in the process).

However, elected leaders usually carry out the wishes of those who voted for them. Politicians do what they think will maximize their chances of getting re-elected (or elected for the first time). In Rhode Island’s case, maybe they have not implemented more effective measures because we haven’t asked them to do so.

Anecdotally, looking at places that have been the most successful such as Maine and Vermont, one is struck by cultural differences. In most stores and businesses in Maine and Vermont, wearing a mask is required for entry, regardless of vaccination status. There are no exceptions. Most restaurants have re-geared for exclusively take-out business. Even outdoors, where wearing a mask may not always be essential (except in crowds), many people nonetheless wear them.

I have personally seen someone trying to enter a coffee shop or store without a mask in Vermont, and being shamed out by the customers without the employees having to say anything.

The impressions and sights in Rhode Island are often different. Here, vaccination can substitute for mask wearing – even though the science has shown vaccinated people can spread infection. The staggeringly high infection rates in Rhode Island show it’s not working.

The impression one gets in Maine and Vermont is a strong sense of community. People care about and respect each other – and themselves – and show it not only by getting vaccinated and boosted, but with universal mask wearing, social distancing, eating outdoors, and being smart and not gathering groups of unmasked people indoors in places like bars and restaurants.

Maybe Rhode Islanders don’t care enough to do what is needed to reduce infections and deaths. Maybe Rhode Islanders don’t have the same sense of community, of respect for the rights and lives of other people – and ourselves in the process – as places like Maine and Vermont. It’s hard to point a finger at absolute reasons, but the vast differences in infection rates and cases, and the health of state economies, show what is possible.

If we want Rhode Island to be a safe, healthy, economically thriving place to live, it must start with us. We must be driven by a sense of community rather than immediate gratification, whether for short-term business profits or entertainment. We cannot prioritize wanting to go to bars, or shopping without the unbearable oppression of wearing a mask, over the health and lives of others. If for no other reason that the life we ultimately save may well be our own. 284,909 Rhode Islanders so far have contracted COVID, 27% of our population. The actual numbers are certainly much higher, and it’s likely that those not yet been infected are in the minority.

Trying to predict the future is usually a guarantee of being wrong. Especially with a virus that continues to surprise us, generally in unpleasant ways. While the current Omicron surge should subside within a few weeks, it will cause a lot of suffering and will not be the end of the pandemic. Over the long term humanity will eventually adapt to the virus and it should pose a decreasing threat to us. But along the way there will be years of cycles of new variants appearing, surges coming and going, and new vaccine formulations to combat them. How this process goes, how many of us get infected, or die, or get long COVID, and how the economy performs, is completely up to us.

Maine has learned how to successfully ‘live with the virus’ in healthy, sustainable ways that protect both lives and the economy. Rhode Island has not. We have succumbed to it.

It’s our choice if we want to change and become a healthy, thriving place to live, or continue to be a cesspool of contagion. Elected leaders usually only take action if they think they will otherwise lose votes. If you have anything to say to our government officials – hopefully to tell them they will not have your vote unless they take actions to make Rhode Island a safe, healthy, economically thriving place to live – you can reach Governor McKee at:

Find your local state Representative at:

Nick Landekic of Bristol is a retired scientist and entrepreneur who has spent more than 35 years working in the pharmaceutical industry.