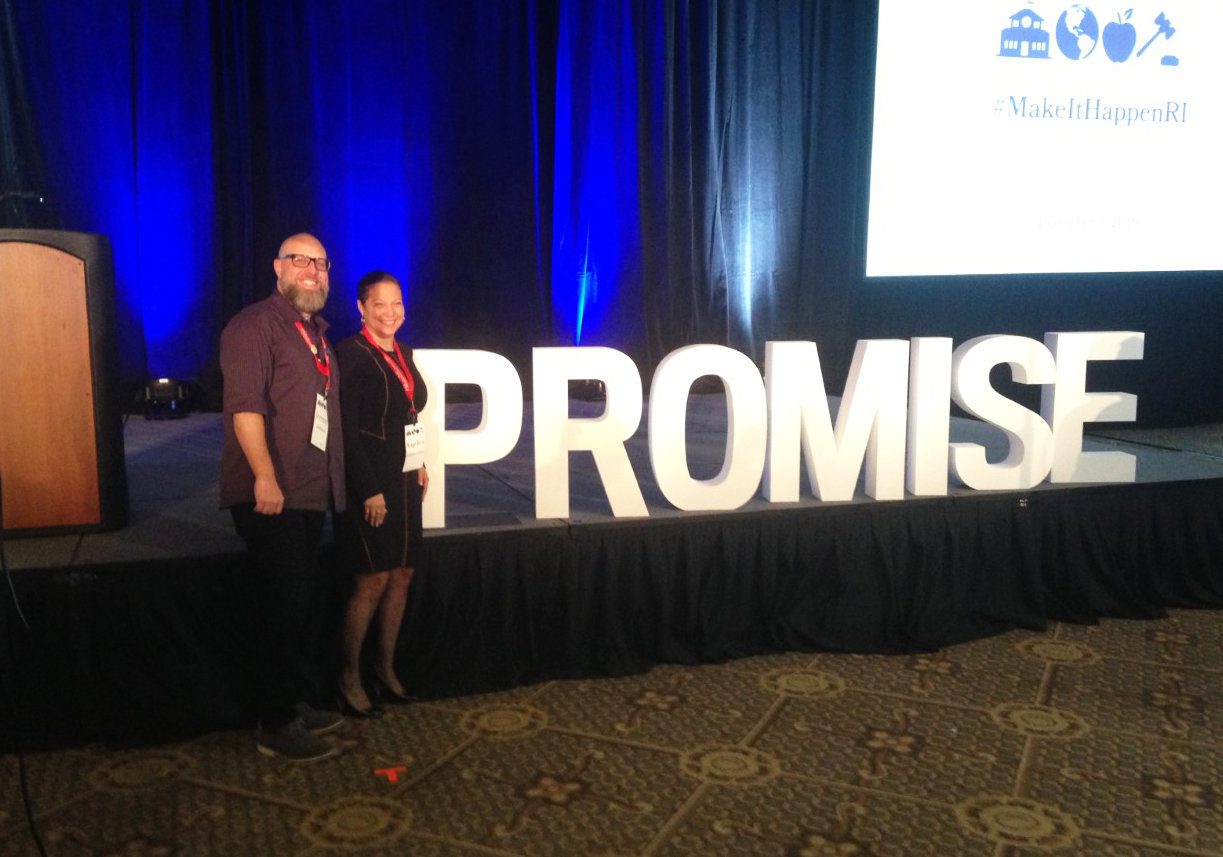 What will it take to improve Rhode Island schools?

(Photo: R.I. Education Commissioner Angelica Infante-Green poses for a photograph in front of a “Promise” sign at the Rhode Island Foundation “Make It Happen RI” gathering in December of 2019)

By Lou Giancola for ConvergenceRI.com

In 1999 the Institute of Medicine issued a report entitled “To Err Is Human: Building a Safe Health System.” It estimated that the health care system was responsible for between 50,000 and 100,000 avoidable deaths per year and 1 million injuries. Health care professionals initially rejected the possibility that they could be causing such great harm, despite the fact that  there was undeniable, well-documented proof.

The federal government, through the Medicare program, along with business groups paying for faulty health care through employer insurance, began to hold the health care system accountable for better outcomes.

The elementary and secondary education system in Rhode Island seems to be having its “To Err Is Human” moment, as the performance of students throughout the state, but particularly in the urban core cities, is significantly lagging behind students in neighboring states.

Look at the graduation rates. The statewide average in Rhode Island is 84 percent, but falls much lower for the following demographic groups:

• For Hispanic students, the graduation rate is 76.9 percent.

• For students with limited English proficiency, the graduation rate is 71.7 percent.

• For students of Native American descent, the graduation rate is 69.2 percent.

No surprises here: just as your Zip Code can be correlated to poor health status, Zip Code is a predictor of educational outcomes.

To change the system
The challenge facing the new R.I. Commissioner of Education, Angélica Infante-Green, and the superintendents of those districts with large students from disadvantaged families, is how to change the system to achieve better outcomes.

Following the principle that you can’t manage what you can’t measure, the R.I. Department of Education [RIDE] has put together an extensive data bank that is available to the public. It provides detailed information on every public school in the state.

Based on the data and a somewhat complicated weighting system, RIDE has used a “star” system, one to five stars, to differentiate schools. This is another parallel with the hospital-rating system. The theory is that school administrators and teachers will strive to improve their ranking.

Schools ranking in the bottom five percent, some 22 schools, have been identified as needing Comprehensive Support and Improvement [CSI].

Of those 22 schools, there are 13 in Providence, three in Pawtucket, two in Woonsocket and one in Central Falls, the districts with the most economically disadvantaged students.

Modest grants
These schools identified as needing Comprehensive Support and Improvement support have received modest grants from RIDE [derived from a federal grant to the state] to work on one of more of four areas in what is known as the Rhode Island Framework for Improvement. They include:

• High-quality materials and instructional transformation; and

Each of these categories of improvement has multiple criteria against which schools will be assessed.

For instance, one example under ‘Climate and culture shift, Criterion 2.1.1,’ is: “The school has a process for identifying struggling and at-risk students and systematically monitors student and program effectiveness.”

The “Every Student Succeeds Act of 2015,” among other things, mandated that every state develop a system of accountability for schools. As one educator told me, Rhode Island has been late in putting such a plan in place, but it now has what appears to be a comprehensive and elaborate plan.

A shift in culture
The Commissioner has publicly declared her intent to shift RIDE’s culture from that of a regulatory agency to that of a support to the state’s schools. The plans outlined above have elements of support, but there is also a strong current related to accountability.

RIDE, along with consultants from a national consulting firm, School Works, will begin to conduct site visits to those school systems having CSI schools to determine their progress in the four domains delineated above. A 15-page monitoring site visit protocol will guide the site visits.

CSI schools are also required to form Community Advisory Boards consisting of parents, and to involve them in the improvement process. The need to listen to the patient and their relatives or, in the educational context, the student and their parents, is another similarity in trying to improve outcomes.

• Leadership. The people who are affected by the process change have to believe in the change sought by leadership and trust that the leaders are not out to scapegoat them. In this case, the teachers have to believe that the Commissioner and the superintendents understand what teachers are up against and will support them through the change process.

The teachers are like nurses in a hospital. They are naturally suspicious of leadership, usually because they have not always felt supported by leaders. Overcoming that mistrust and developing the relationships with the frontline staff, nurses or teachers, doesn’t happen overnight, especially when it feels like they are under siege.

Has the Commissioner created those relationships and the trust necessary to mount a campaign to improve outcomes or does it feel like the pressure to change is being pushed down from the top without sufficient input from the teachers? The Commissioner and superintendents are under tremendous pressure to show immediate results which may work against taking the time to build a trusting relationship.

When I was in a leadership position at a prominent Massachusetts hospital, I wanted to improve patient/customer service. However, the consultants I hired found that the effort would fail if we didn’t first fix the toxic relationships between doctors and the staff.

There is ample evidence, based on third-party assessments, that the culture in many of our schools is not positive. Culture doesn’t change overnight. It happens when the participants in the organization see real changes in the way leaders relate to them and feel supported in their work. Teachers, students and parents need to believe their voice is being heard and that leaders will engage them as partners in the change.

Culture change is given prominence in RIDE’s plans. But I don’t know if those in charge appreciate the time and effort it will take to turn it around.

• Constancy. The people involved or most affected by change want to know that the most recent plan isn’t the flavor of the month. Many teachers have seen multiple plans and many leaders come and go. Based on my experience, I suspect that some teachers are actually sitting back and waiting out this latest initiative.

The teachers need to see real changes in the things that make a difference to them on a day-to-day basis to give them faith that leaders are serious. Often these changes seem trivial, such as having the necessary supplies or books arrive on time.

In the hospital setting it was a thing like making sure there was an adequate supply of linen on the nursing units. I believe you have to remove the barriers to people doing their job before you can ask them to change.

• Community support. I have friends who point to the high per pupil expenditures for public education in Rhode Island and conclude that we don’t have a resource problem. That attitude may be a barrier to real change. It leads some to the simplistic conclusion that if it isn’t money, it must be the teachers. It ignores the fact that resources may not be channeled to the source of the problem.

More importantly, it draws attention away from the multiple causes of poor school performance, particularly by students from economically disadvantaged families. The schools, particularly those in our core urban cities, need broad-based community support.

My aim is to convey what I have learned to others and to encourage them to become engaged in this most important endeavor.

Lou Giancola, the former president and CEO of South County Health, is a frequent contributor to ConvergenceRI.