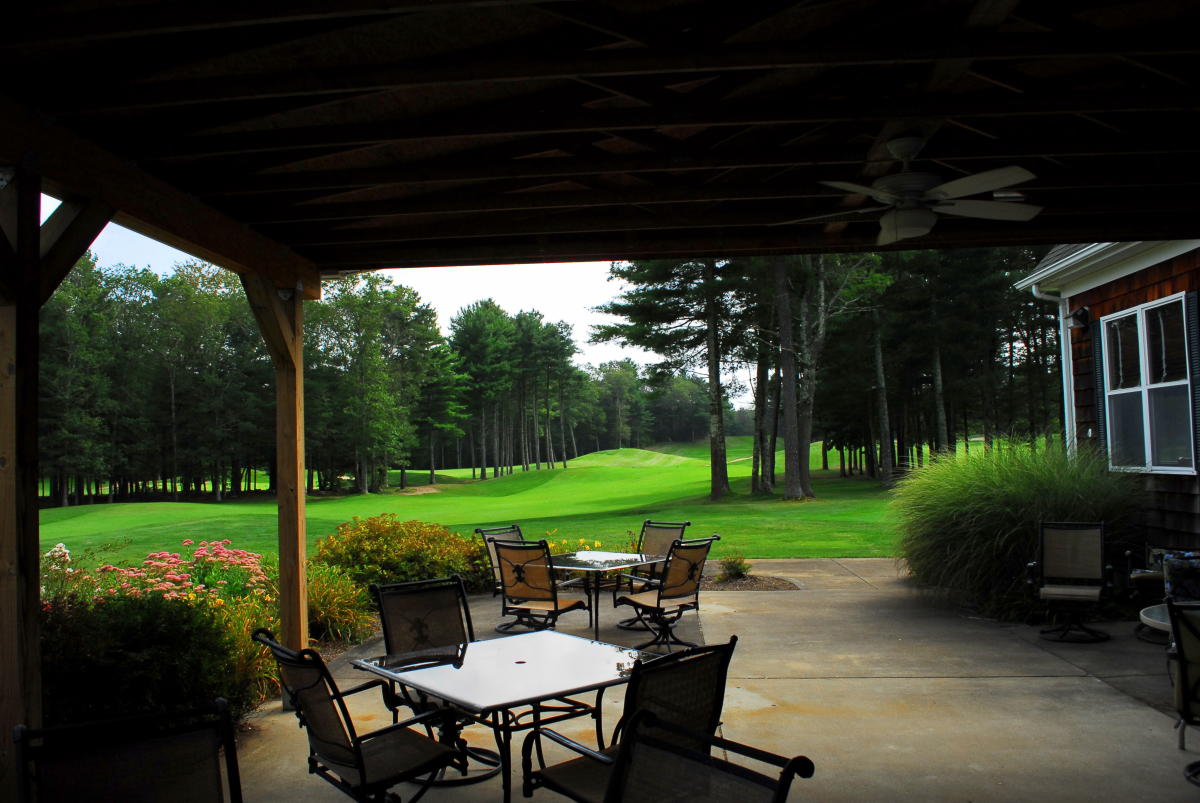 Welcome to Pinecrest Golf Course – #6 of our golf course reviews

Pinecrest Golf Course is a must play venue for any golfer – you will be pleasantly surprised by the beauty and challenges ahead of you.

In the southern part of the state, known to the locals as God’s country, is a 9-hole slice of heaven called Pinecrest. It has everything a golfer wants, a plush green course where you’re rewarded for staying on or near the fairways, challenged on the greens, and surrounded by beauty everywhere you turn. Originally name Pinehurst (because of the street address the course was on) when the course opened in 2002, the owners were forced by the PGA namesake to change their name due to a copyright issue.  But that change did not stop what was one of Rhode Island’s best kept golf course secrets from becoming well known as one of the state’s best 9-hole golfing venues.

Pinecrest Golf Course is a par 35 that is a 2,891 yards roller coaster, with a 131 slope and a 67.7 rating. There are two par-3s, six par-4s, and one par-5 spread across plush green fairways that are well maintained, with trees lining both sides of every hole. The course provides golfers enough challenges to have them think how to attack each hole but is forgiving enough to let players work out any mistake or mis-hit to still score well. But, like all golf courses, a bad hole can prove to be a round killer.

The first hole is a par-4, 295-yard ease in hole that has an elevated green protected by three sand bunkers that wrap around the putting surface. After an opening drive that landed just off the fairway on the right side, an approach shot that landed pin high into the rough on the left, rain had begun and was getting heavy as we pitched our balls onto the green. Two putts later with the rain pouring down, I holed out with a bogey 5. Before heading to the second tee box, my group decided to camp out under a cluster of trees to allow the rain to pass over. Fifteen minutes later I was teeing up on hole two, a 352 par-4 that had a dogleg right bend that was about 225 yards from the tee, with sand traps on each side of the fairway at the bend. For the big hitters, they would take the chance and cut the corner by going over the tree line to the right. If you went the safe route (which I did) and landed in the fairway only to get a look at another elevated green, you found you had to contend with a pond on the left side that was running all along the side of the fairway right up to the green. And, if that wasn’t enough fun, there was a small creek that cut across the front of the green, so the second shot was going to have to be long enough to get past the creek and straight enough to stay away from the water hazard. My tee shot landed perfectly in the fairway at the bend, my approach shot ended up in the rough on the right side of the green, and another pitch and two putt later, and I recorded my second bogey of the day.

Leaving the green on hole two, we walked around a pond that had a fountain in the middle of it and crossed over a feeding creek that had a small bridge to get us to the third tee. Hole number 3 was another par-4 that was 301 yards, a slight bend to the right, but you always had eyes on the pin. A single sand trap was right of the green, and this hole is rated as the second easiest hole on the course. Mishitting my tee shot short, my second shot was pushed left and landed short, left of the green, and as the previous two holes before, a pitch and two putts later, I recorded my 3rd bogey of the day.

The 4th hole was the only par-5 on the course, it is a 509-yard hole that slants to the left off the tee, and you cannot see the flag off the tee. A small trap is in front of the hole on the left but never really came into play. My tee shot flew to the right and found a cluster of trees between the 4th and 6th fairway. The golf Gods were looking out for me, because I had an opening to punch not only back out to the fairway, but to move closer to the green. Mis-hitting my punch out, I was able to clear out of the cluster of trees but left myself a challenging and long 3rd shot. Taking my 3-wood and making good connection, I ended up in front but short of the green. Mis-hitting the pitch my ball ended up off the green behind the hole with the putting surface running away from my next shot. Three putts later, I recorded my first double bogey of the day.

Hole # 5 is a 112-yard short par-3, mis-hitting my tee shot and flubbing the ball about 75 yards, I was able to pitch my next shot close to the pin and holing out with a bogey 4. At this point I was sitting with a score of 26, and I could have said it had to do with not knowing the course, but in all honesty, I was mis-hitting a lot of shots but scrambling to minimize the damage.

Hole #6 is rated the hardest hole on the course, it is 334-yard par-4 with a dogleg right to an elevated green. My tee shot clipped an overhanging branch at the bend, my ball kicked out away from the treen and landed in the rough with a view to the pin., my next shot found the sand trap on the right side before the green, there are two other traps on the left side. I managed to land my trap shot onto the green and two putts later I walked away with another one over bogey.

The three remaining holes were three of the “easiest” holes on the course, but I never met a hole that I could not mess up, and hole #7 was the one. Hole #7 is a 298-yard par-4 that has a creek running about 160 yards from the tee box. The hole was surrounded by sand traps on all sides of the green; three along the fairway as you approached the green and one along each side of the green. My tee shot ran along the rough of the fairway after going over the creek, and my ball was on a dreaded down hill lie which I duffed about 50 yards forward. My next shot was a total blind one. The hole was elevated, and I had no idea where to hit, so I guessed where the hole might be and hit my third shot. After climbing up the hill I discovered my ball pin high off the green in the rough. A pitch onto the green and two putts later, and I had another double bogey.

Hole #8 was the second par-3 on the course, a bit longer than the first. It was a 130-yard hole with a single sand trap, and I pushed my tee shot left which had trees along the right side. I hit a provisional in case I was unable to find the first shot, and my second shot fell just short of the green. One of my playing partners found my first shot and again the golf Gods were smiling down on me. In the only opening in the cluster of trees was my ball. A tricky downhill pitch and two putts later another bogey found its way onto my card.

The final hole of the day was the par-4, 280-yard 9th hole – a straight hole with a fairway trap on each side and four more traps around the hole. My tee shot went to the right, as had been the case mostly the entire round. My second shot fell short of the left side sand traps which I now had to go over but did not. Blasting out of the trap and barely landing in the green, another 3 putt and double bogey 6 left me with a score of 48 for the day.

Despite a shaky round that had its ups and downs, more because of the operator and not the course, I walked away knowing that I just played one of the best nine-hole courses that the state of Rhode Island had to offer. That old saying that the game of golf ruins a nice walk, really did not apply to this round. I found the course to be in great shape and the walk was genuinely nice. The fairways were groomed and very well maintained, the rough around the fairways and greens where challenging but not impossible to deal with, and the sand traps were positioned where an errand shot would punish you. Every green was in excellent shape with enough slopes, twists and turns to keep you on your toes. The greens played fast that day and a mis-hit putt would hurt your score on that hole.

This little course is not a cakewalk, you need to think about what your shot is going to be, and where you want the next shot to be set up. Pinecrest Golf Course is a must-play round of golf for any player. It is short enough to take risks and long enough to create challenges.

COVID-19 protocols are in place for the safety of players and staff. I will give Pinecrest an A+; you will genuinely enjoy yourself playing this golf course. Pinecrest is located at 25 Pinehurst Drive in Carolina, Rhode Island. Tee times are available and encouraged by calling 364-8600.