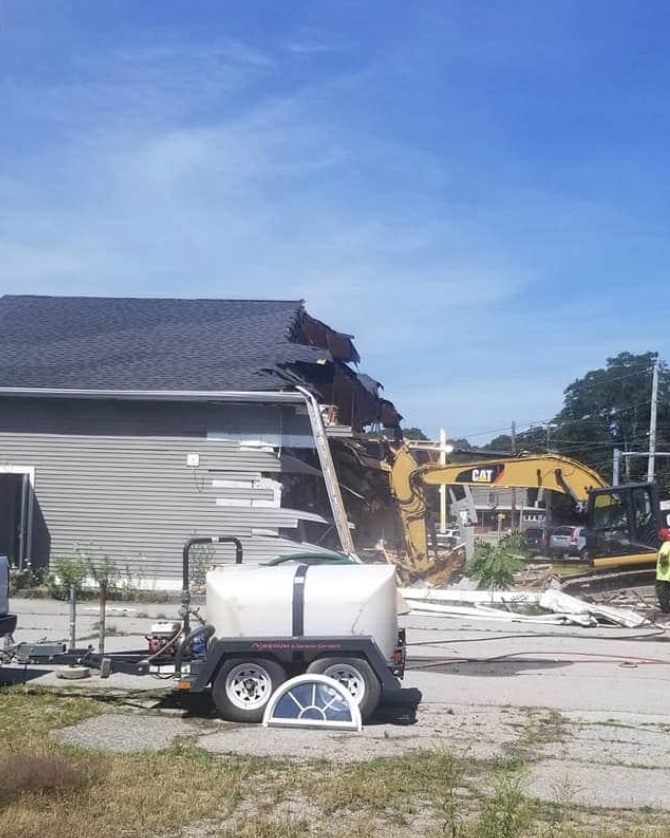 We say “Cheers” to the Backstop Cafe, a RI institution

For the former Backstop Café – as time went by a softball shrine falls to the wrecking ball all in the name of progress, but for many the memories will go on.

It began as a pub where the locals would stop by and have a few beverages while watching sports on television, play some pool or darts, or even engage in a game of cards. Owned by Jim Foster and Ray Conroy, the Backstop Café was the official name but for those who frequented it, it was just known as the Backstop. Located at the bend in Wild’s Corners you could pass it on your way to Oakland Beach, Conimicut, or to the more popular Rocky Point amusement park. The Backstop was for the longest time a fixture on the Warwick social and softball scene.

As the fictitious television show “Cheers” was a place where everyone knew your name, The Backstop truly was the place where everyone knew everyone, and if they did not know who you were, they soon would. A true sports pub, you could walk into the establishment at any time during the day and see a sporting event playing on the TV, and a conversation could be heard in the background where the endless argument would be about the Red Sox, Celtics, Bruins, or Patriots; and yes, at times the Yankees would creep into the conversation.

In the city of Warwick there have been hundreds of pubs, bars and drinking establishments, but there was only one Backstop, and on Monday, July 27, 2020 when the wrecking ball was done swinging all that was left of The Backstop was a pile of rubble and memories of everyone who was a regular there, either as a customer or a member of the great Backstop sponsored sports teams.

Originally known as The Victory Tap in the 1960s, until it was purchased by Mike Boyajian and Jim Foster Sr. in 1972, both who were catchers on local softball teams (the position was aka as “backstops”), the name was changed to The Backstop Café and the legend was born. Virtually right out of the gates, the Backstop was a haven for all things sports, and both Boyajian and Foster jumped in feet first into the sponsoring end, first backing a 50-and-over softball team. “This was a way to connect to the community and allow the regulars of the bar to go out and have some fun playing softball, then coming back for some food and beverages.” Said Ray Conroy, who would become the Backstops owner along with his cousin Jim Foster, Jr. from 1980 to 2002. It was during those years that Foster, and Conroy established the Backstop, as a softball powerhouse. Both men had been members of the great men’s’ softball teams, Taylor Brothers and Parisault Builders. Back in the 1960s and into the 1970s, the Rhode Island local softball powerhouses consisted of teams with names like Conti Brothers Construction, Taylor Brothers, Taylor Construction, Clark & Sons Locksmiths and Parisault Builders. There were many other Rhode Island teams that played but these were the BIG BOYS, these were the teams that all others that followed would be compared to. When the time came where some of the big teams petered out for one reason or another, (both Conroy and Foster who played for some of the big teams in their younger days), the Backstop established itself as the leader of the new wave of local softball powers in the state.

It did not take long to get to the top, playing out of Warwicks Clegg Field. The Backstop recruited up-and-coming local players while mixing in some of the state’s best talent. The Backstop won their first-Class A State Title in 1981, they followed that up by winning the Class B State Championships in 1985 & 88 and coming in second place in 1984 and again in 1987.

It was in 1985 that it was clear to both Conroy and Foster that the softball horizon was changing, and it was not in a direction that they wanted to go. The Backstop continued to sponsor local youth teams and fundraising events, but for all intent and purposes the Backstop got out of the men’s softball sponsoring business. “We seen the game changing and not in a way that we wanted to be remembered by. We played the best of the best at the top level that was offered,” said Conroy, “but we didn’t want to be part of what we saw as the demise of softball in the state. The A level was gone, they travel league was gone, and teams were playing “B” and “C’ level, perhaps 3 or 4 of the new teams could play at the top level, so we decided to focus in other directions and quit while we were on top.”

In 1991 Jim Foster’s brother Bill decided to start a new men’s softball team, the Backstop next generation! “It was to be made up of local kids who wanted to play softball.” Said Jim Foster, “but it fizzled out a couple of years later, I think the weight of the name was too much. The Backstop teams of the past were a lot to live up too. Also, Bill’s unexpected death put an end to the resurrection of the team.” During that time Conroy concentrated his efforts on the emerging Women’s Softball program. “I jumped into both sponsoring and coaching the Backstop women’s teams during the 1990’s,” Conroy said, we were very successful for 5 years winning a couple of state championships and traveling to the National championship tournaments.”

The Backstop Café was sold in 2002 and again a few years later; the new owners never reached the success that Foster and Conroy had with the business and sponsoring teams. The last ownership tried to incorporate the Backstop as part of a chain of “sports bars” and never got it off the ground. The bar that was the home of softball in Warwick closed its doors a couple of months later, never to open again. For the last few years, the building and property has been vacant and dormant, with no plans for a revival. That is when to everyone’s surprise the building was demolished and within a couple of hours a Warwick sports icon was gone! “Sure, there will be other sponsors that will come and go, but we will never see one like The Backstop ever again,” said longtime player Bob Berard, “The Backstop was Cheers before there was a “Cheers!” he concluded.