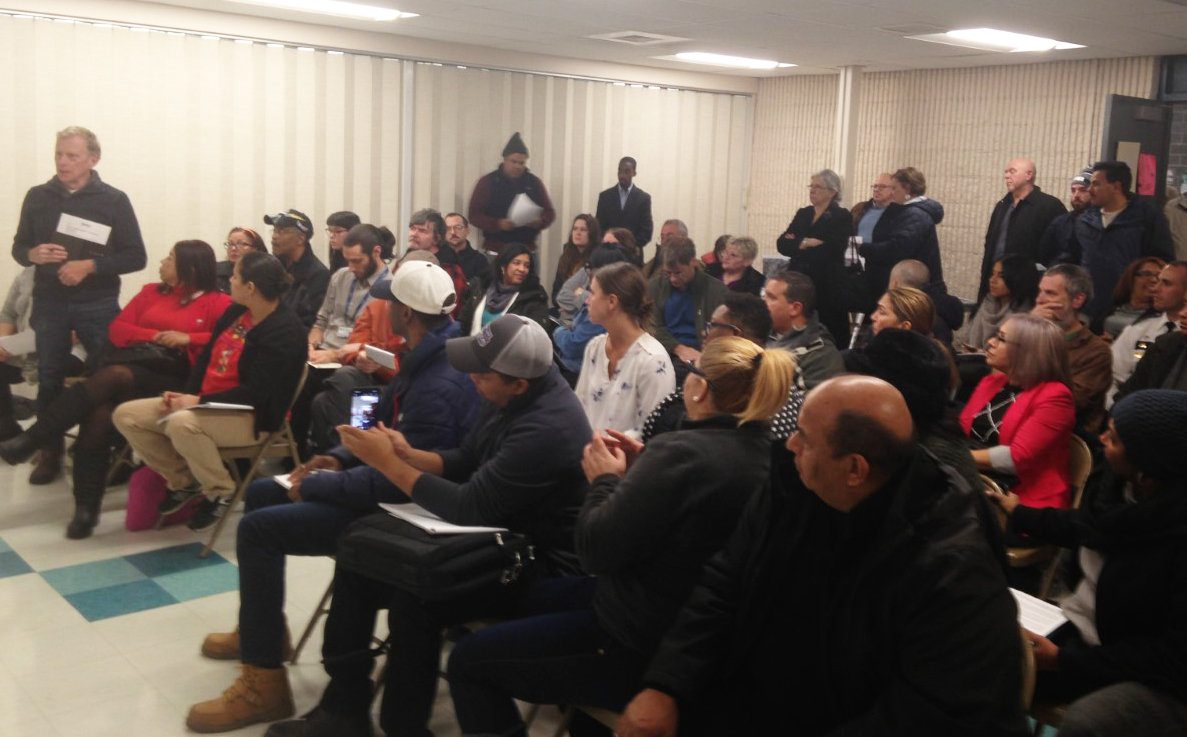 We are not the dumpster

Neighborhood coalition ramps up its efforts to oppose new waste transfer facility on Allens Avenue, promising to shake up retail politics in Providence

Call it retail politics at its best. It was bitterly cold outside but the conversation inside the Washington Park Center on the evening of Wednesday, Jan. 8, was hot.

The message, articulated loud and clear by some 50 neighborhood residents and advocates, in response to plans to build a new waste “transfer” station on the corner of Allens Avenue and Thurbers Avenue, with its promise to bring some 2,500 tons of waste per day into the community, and with it, an estimated 188 diesel trucks in and out every day, was direct: “We are not the dumpster.”

To attend the gathering, which was organized by Washington Park Neighborhood Association President Linda Perri and Providence City Councilor Pedro Espinal, participants had to pass around the meeting of local Boy Scout and Cub Scout troops.

The takeaway: Residents are no longer willing to be trusting and reverent toward the political decision-makers that do not include their voices at the table, but they are brave enough to develop a vociferous, community-based strategy to oppose the construction of a new transfer facility, which is scheduled for a hearing on Tuesday, Jan. 21, before the Providence City Planning Commission.at 444 Westminster St.

Political dealmakers take note: the same kind of community-driven opposition to the proposed Invenergy power plant in Burrillville resulted in its cancellation.

The neighborhood meeting did not attract TV cameras and it didn’t make it into Ted Nesi’s political column as an item. But it was attended by a number of elected officials and political figures, all who sought to curry favor with the residents.

They included: six Providence City Councilors [Pedro Espinal, Ward 10, who served as emcee of the meeting; Helen Anthony, Ward 2; Nirva LaFortune, Ward 3; Carmen Castillo, Ward 6; and Mary Kay Harris, Ward 11], and a declared candidate in Ward 1, John Goncalves, an organizer with the Providence Coalition of Neighborhood Associations, which helped organize the gathering. That’s one vote away from a majority.

There were two state senators, Harold Metts and Ana Quezada; one state representative, Grace Diaz; along with former Providence Mayor Joseph Paolino, and former state Rep. Aaron Regunberg. Metts likened the current community uprising to a previous one, when angry mothers demanded an upgrade of the Flynn school.

In search of a vision for the Port of Providence

Paolino, who had published an op-ed two days before in The Providence Journal, pitched his plan to redevelop the real estate along Allens Avenue as a vision of a gateway to the Capital City, built with tax credits from the city and the state.

When Paolino asked for comments, he found his plans being questioned by Greg Gerritt, a local environmental activist, who challenged him about his vision – and about the missing vision for the future Port of Providence. Rather than seeing the port as a real estate opportunity, Gerritt spoke about the port as a future center of commerce, not based on scrap metal operations, but as a deepwater port, one of the few that will survive the onslaught of climate change. “We need to be a maker,” Gerritt said.

Paolino and Gerritt agreed to disagree, in the kind of civil dialogue so often absent from today’s political discussion.

It was City Councilor Helen Anthony who put her finger on the larger problem: the lack of plans for development for the city’s waterfront, beyond its use as an industrial wasteland.

“We need to rezone this land, and we need to create a plan for its development, and I think planning for that development should be led by the neighbors who live here on the South Side,” she said, as reported by Uprise RI’s Steve Ahlquist. “When the project is brought before the City Planning Commission, they’re going to have very few tools to say no to this project.” The approval process does not require an environmental impact statement; the question is: why is that?

Instead, Anthony continued, the focus needed to be on putting political pressure on the state Department of Environmental Management, the agency that will have to approve the transfer station application, and on Gov. Gina Raimondo, who runs DEM. “Enough is enough,” Anthony said.

No one disputes the fact that, as Linda Perri put it, “Air and traffic pollution in and around Allens Avenue and the Port of Providence is out of control.” Or, as Julian Drix from the R.I. Department of Health said: “It’s not just about poverty. It’s about racism,” providing the statistics that showed that Providence was at the epicenter of an epidemic of asthma. The community where the waste transfer station is to be proposed has the “highest overall burden of asthma” in the state, according to Drix.

But it was Dr. Peter Simon, a retired pediatrician and epidemiologist, who was known as Dr. Martes when he had office hours on Tuesday at the local community health center in Providence, who changed the tenor of the conversation when he spoke, attempting to connect the dots between the politics and the health care threats and consequences posed by the proposed waste transfer station.

First, he asked all those in attendance: How many of you have a member of their family who has asthma. Almost everyone in the room raised their hands. Asthma, Simon continued, is the number-one reason why children are absent from school in Providence.

Simon then called out a number of the state’s leaders, including Angelia Infante-Green, the state’s Education Commissioner, asking why asthma was not on her agenda when talking about the future of Providence schools.

Simon railed against what he called “the game” being played on the city’s kids by Infante-Green and Peter Alviti, the director of the R.I. Department of Transportation. All the health data on asthma is known, Simon said.

Simon’s blunt presentation provoked a strong response from the crowd, including perhaps his most memorable line, when he said, in addition to metal scrap waste and pollution, the other leading export from Allens Avenue and its strip clubs was syphilis and other sexually transmitted diseases.

An assault on truth

Afterward, Simon, a frequent contributor to ConvergenceRI, wrote up a brief report on his experience. Here it is:

“I was invited to speak at a community forum held last night at the Washington Park Community Center on the South side of Providence. The meeting had been called by organizers who were concerned with the environmental injustice issues associated with a proposal to use the waterfront in their neighborhood as a huge municipal waste-processing center.

“I was asked to provide a pediatric and public health perspective to support a full understanding of the community health threats included in this proposal, soon to be considered by the Providence City Planning Commission.

“Councilman Pedro Espinal did a terrific job describing his understanding of the threats to community health and well-being embedded in this new business proposal. Asthma prevalence in this part of the city is the highest in Rhode Island, according to data presented by Julian Drix, who manages the Health Department’s asthma program. [In his talk, Simon called Drix “a diamond.”]

“I tried to get the room thinking about what asthma means to them, not on medical grounds, but on the assaultive nature of a chronic condition on their families and children.

“Many hands went up when I asked how many had someone with asthma in their families, Even more went up when I asked who knew someone with a child suffering from asthma. Few knew, however, that asthma is the number one cause of school absenteeism in Providence. No one could recall hearing this in the recent discussions about the “failure” of the local school district in Providence and the impending takeover by the R.I. Department of Education. When I asked them to posit why this issue received so little attention, no one voiced an answer.

“They could see the assault on their children and family members with asthma by increased exposure to deteriorating air quality caused by huge diesel trucks carrying tons of waste products. It was more difficult to see, however, the assault on truth by the Governor and her minions to take over school spending with the unstated plans to shift more and more money into the use of technology and by misusing testing scores to weaken the role of professional educators in “fixing” what is really wrong with our schools.

“Turning this assault around will be challenging. Meetings like this one must lead to more work to inform community members about the “game” being played out in Providence. I hope the need for a better economic development strategy will come from an effort to explain how “things work” in Providence.

From the questions asked by members of the audience, most understood the power relationships at play. One individual questioned the role of Rhode Island Hospital and its failure to pay taxes because it was a nonprofit. Another wanted to know about the growing stink on Allens Avenue, which they said was getting worse. [Linda Perri explained that the stench was coming from Sprague, and that the R.I. Attorney General was on the case.] Others raised the economic costs of asthma on families.

The larger question, of course, is whether the political establishment in Rhode Island was tuned in and paying attention. Judging from the opening remarks of the R.I. House Speaker and the R.I. Senate President for the 2020 session of the R.I. General Assembly, asthma caused by pollution afflicting Providence was not high up on their agenda.

This week, Gov. Gina Raimondo will give her State of the State address on Tuesday, Jan. 14, followed two days later by her proposed state budget. In our world of sports betting, what are the odds that the Governor will talk about a new vision for the Port of Providence?

Still, elected officials who fail to pay attention to an uprising by a coalition of Providence community neighborhood associations around environmental justice issues and the proposed transfer station may do so at their own peril on Election Day in November.