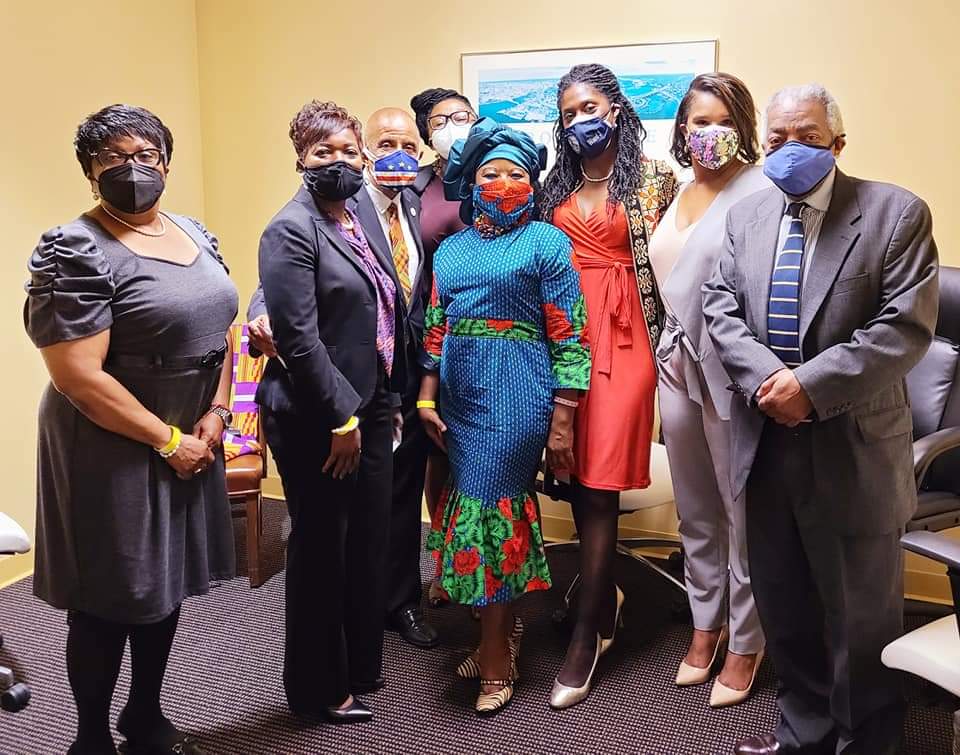 Vice President Kamala Harris and Secretary of Commerce Gina Raimondo touched down in the Ocean State on Wednesday to rally support for the Biden/Harris American Jobs Plan.

After a greeting of VP Harris at TF Green Airport with Air Force II, by Raimondo and the full RI Congressional delegation, it was on to a visit to Wayland Square’s “Books on the Square”, where the VP browsed and purchased a few books. Raimondo told her that this was her favorite neighborhood bookstore. Raimondo’s family home is just a few blocks away on the East Side of Providence.

Next stop was the business incubator, Social Enterprise Greenhouse, in the jewelry district now the innovation district, in downtown Providence. A Roundtable Discussion with five Rhode Island women owned businesses took place. During a forty-minute roundtable it was the Vice President and Secretary peppering the businesswomen with questions on how COVID-19 has impacted their respective business.

Liberian Christina Paige owner of Bliss Hair Salon specializing in hair replacement and augmentation services talked candidly about how she has weathered the pandemic as a business owner.

Secretary Raimondo opened the Roundtable praising the Biden/Harris Administration for understanding that having childcare for women and listening to the needs of working women is so important, and part of supporting the “infrastructure”. The “Build Back Better” plan known officially as the American Jobs Act includes providing funding for assisting women with paying for childcare.

The Vice President echoed the sentiment that assisting working mothers with childcare, bridge money for small business owners, like Paige, was what the plan was intended to do.

The owner of Bliss Medical Hair Replacement Center in Providence, Paige talked frankly about how the funding from the Goldman Sachs Small Business project assisted her with obtaining money needed to keep the doors open. “I didn’t know how I was going to pay my business rent”.

Minnie Luong, founder and CEO of Chi Kitchen, an Asian food company located in Pawtucket, Cheryl Zimmerman, CEO of FarSounder in Warwick, The Bliss Medical Hair Replacement Center, Chef & Culinary Educator, Jennifer Cavallaro, owner of The Beehive Cafe in Bristol and Suzanne Wernevi, owner of Luna & Stella, a fine jewelry business based in Providence were among the others at the table, sharing their experiences in a very personal way.

They all had praises for the Administration for providing the funding and technical assistance they needed. Keeping twenty-eight individuals employed, funding for daycare services for their children or funding to keep their businesses up and running. Secretary Raimondo noted that all the women are mothers, and the group discussed that their children’s care was a priority while also starting and running their businesses, and for some was the motivator behind their entrepreneurship.

“It was truly powerful and inspiring and showed me what was possible,” said Deputy Secretary of State Melissa Husband about her short but memorable visit with the Vice President. Deputy Secretary Husband along with Representative Anastasia Williams, Providence City Council member Nirva LaFortune, Angela Ankoma, of the Rhode Island Foundation.

Henrietta Whiteholder, Executive Director of Higher Ground; Ray Rickman, Stages of Freedom; and NAACP Providence President Jim Vincent were gathered, corralled in a holding room at the Lynx building on Airport Road in Warwick; the intimate group waited for the Vice President.

“She touched on several issues and the Administration’s commitment to diversity and inclusion, housing, education and their concern about all of these,” said Vincent. “I was surprised to hear her echo an NAACP theme, “When We Fight, We Win”.

The visit with the Vice President was orchestrated by Harris’ former colleague in the Senate, Senator Sheldon Whitehouse. Kudos for the visit were given all around by those gathered in the room.

Editor’s Note: The buzz of a White House visit, regardless of one’s politics, was exciting at a time when the smallest state is just waking up from this long pandemic time. Hearing how women pivoted in their companies over the past year, and positioning childcare roles at the center of women’s success, leaves a more realistic and hopeful future for women in business.