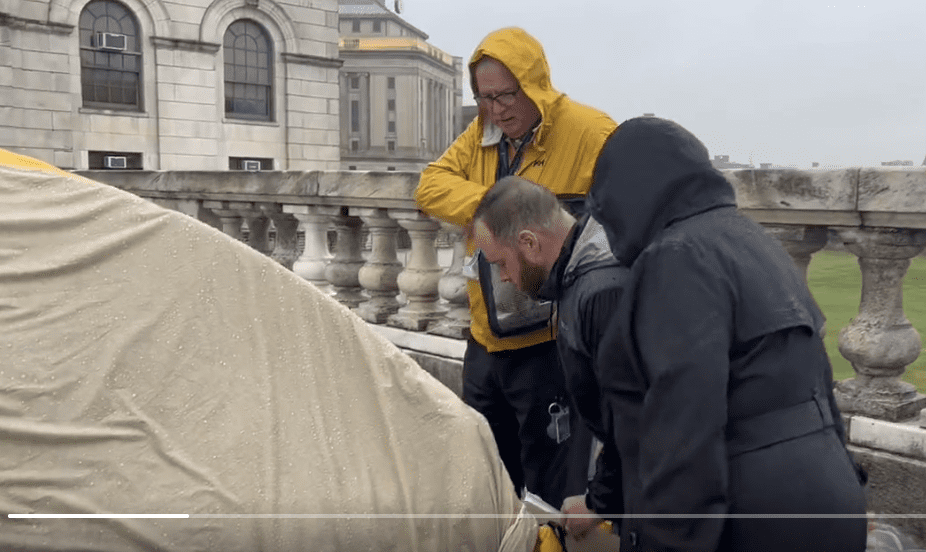 For UPDATES, see bottom of article:

Steve Ahlquist of UpRiseRI was the only member of the press on the scene as events unfolded and provided media who were not notified or sent an information release updates via live Tweeting. Ahlquist provided a photo of the eviction notice:

Everyone in possession of the eviction notice was informed that they would be provided with a bed. However, couples would need to be separated as no couple housing or housing with pets was available. Men were told they could go to Emmanuel House, a shelter run by the Diocese of Providence. No information was available for women or arrangements for pets. Possessions would be moved and/or stored, and transportation provided. Any items left on site not labeled would be disposed of.

Failure to comply with leaving the State House premises could result in a fine or arrest, per the announcement.

Eva Marie Mancuso, also of the governor’s office, was handing out coffee and doughnuts to those who wanted it. Yesterday members of House of Hope delivered pizza to the encampment.

A spokesperson for Emmanuel House said they have had bed availability “all along” and were told to expect 4 men to come over today.

Their census was increased from approximately 35 to over 50 in a bunk bed type setting. The spokesperson said that no women could be housed there. They accept people in active recovery. People do have to leave every day at 7am and can return no sooner than 6pm. The shelter is run by the Diocese of Providence and is located on Public Street.

This morning we were asked by the state to provide shelter and needed services for four of the men who have been staying on the front plaza of the State House. As we always have been, we are prepared to assist and shelter more men if needed.

There is a couples shelter run by Crossroads though we are still waiting for information on this possibility.

Rep. Enrique Sanchez has publicly called for the eviction notices to be rescinded.

Those in need of emergency shelter anywhere in Rhode Island should contact (401) 277-4316 or www.rihomeless.org/ces. This is the central intake line for all calls for emergency shelter/housing information.

The Cranston Street Armory has repairs needed to open it – when they are made it will take up to 50 people according to the Governor’s office. Update on that is here: ARMORY – the Boston Globe notes that so far, no agency has responded to the RFP to run this program.

TY to Tara Granahan on WPRO who interviewed RINewsToday on the developments as they were happening.

Documenting the notifications was Steve Ahlquist of UpriseRI:

Many of those encamping at the RI State House are being moved out to facilities today, in the rain, with crews helping them pack up.

Following the administration’s actions earlier today regarding the individuals seeking shelter on the State House grounds, Crossroads deployed a team of street outreach workers and case managers to help ensure a smooth transition to emergency shelter, as we have done since tents first arrived at the State House weeks ago. Our team is connecting people with shelters that best fit their needs.

Our focus today is ensuring that Rhode Islanders in need are kept safe, which is why we – along with a number of other service providers – are offering shelter beds to those impacted and why we have stepped up to work with the state and others to bring emergency shelters and other supports online as quickly as possible. While we are responding to this urgent action, we will not lose sight of the need to provide people experiencing homelessness with the support and resources they need to find and maintain permanent housing.

“As we’ve shared previously, street outreach teams from local homelessness providers contracted by the State’s Department of Housing have routinely checked on the individuals outside the State House over the last several months to connect individuals to available services and shelter.

Earlier today, street outreach workers from our providers in collaboration with state employees, again visited the individuals outside the State House and offered to work with them to immediately connect them to a bed and transportation to a shelter.

After several months of outreach, individuals were notified this morning that they must vacate State House grounds within 48 hours and that camping/sleeping overnight at the State House is prohibited. Over the 48 hours, outreach workers will continue to meet with the individuals and again offer them access to an immediate bed and transportation to a shelter. To make every effort to keep individuals connected with their belongings, any possessions boxed within 48 hours will be temporarily stored by the Department of Administration for 30 days. The State has materials available to assist individuals in packing their belongings.

The State’s goal has always been to work with our local providers to engage the individuals outside the State House in a way that meets their needs and ultimately connect them with shelter and permanent housing with wraparound services.”

The RI ACLU has been asked for an opinion on the legality of the action, noting that the notification was given on plain white paper, undated and unsigned. The law section mentioned has to do with trespassing on private property

An event has been sent for TODAY from 5 to 6pm at the RI State House encampment location:

Friday morning Rally – has been set for 8am Friday at the RI State House (1 hour before eviction deadline):

Several members of the media have notice that the Governor’s office and the housing czar office and their spokespeople are no longer responding to media requests and statements.

In any developing story, talk radio is integral in following and informing.

Tara Granahan of WPRO spoke to RINewsToday but the interview was not podcast – later in the day, Dan Yorke had 2 long interviews on the day’s events:

This is a developing story and will be updated throughout the day.