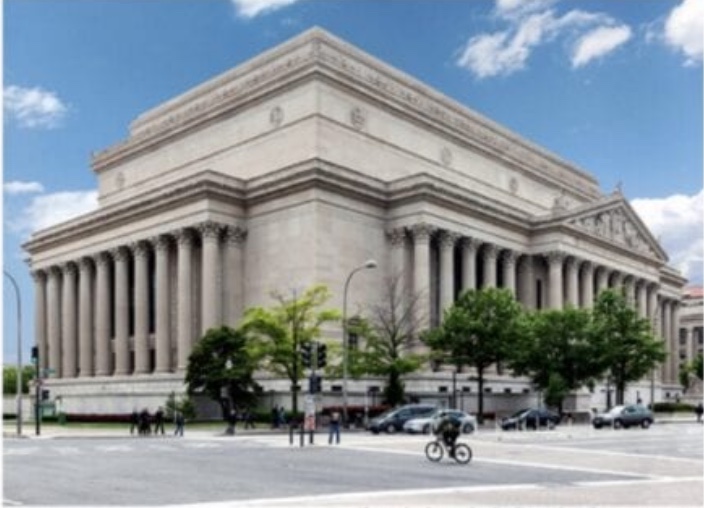 One of seven pairs of matched federal buildings in survey by Harris Poll. Another example is at end.

Now would not seem to be the moment for convergence on a major cultural issue in America. Division is everywhere. And yet a new survey by the Harris Poll, done for the National Civic Art Society, shows an overwhelming public preference for classical over modernist styles in the design of federal buildings and courthouses.

In August, the Harris people showed 2,039 respondents seven pairs of unidentified federal buildings, each matching one classical against one modernist in style, and asked “Which of these two buildings would you prefer for a U.S. courthouse or federal office building?” They took care to make sure each choice was fair:

From a long list of many dozens of photos, the seven pairs of images were very carefully selected and edited to ensure fair comparisons. Factors such as sky color, angle of photo, light conditions, distance from building, weather conditions, nature of foreground, nature and quality of street furniture, presence of street trees, parked cars, and passing people were all controlled for either perfectly (e.g., sky color) or as far as possible via careful photo selection and editing.

Click the link above for the survey itself to judge how diligently they worked to match the buildings evenly.

The poll found that Americans prefer classical architecture across a range of demographics. A ratio of between two-to-one and three-to-one prevailed in favor of tradition among Americans in general and among categories of the public broken down according to age, sex, race, income, education, region and party. The numbers of those who prefer traditional over modernist styles for courthouses and other federal buildings are as follows:

It is naturally gratifying for classicists to yet again have their reverence for tradition ratified by solid public support. It may surprise some that the degree of that preference is maintained over such a range of demographic categories. But few classicists can be surprised by the findings. Indeed, few modernists can be surprised. That the preference for tradition prevails well beyond federal buildings is a sensible presumption that might be taken from the survey’s modest conclusions:

Why does a wide majority of Americans prefer a U.S. courthouse or federal office building with a traditional appearance? Perhaps the neoclassical style of some of these buildings, as well as that of Colonial Revival, is positively associated with the historic architecture of the American founding, iconic government buildings such as the U.S. Supreme Court, and/or the country’s democracy. Furthermore, some of the buildings in the study are characterized by classical columns and pediments—features that could signify a courthouse as a recognizable building type—i.e., a temple of justice.

It is also possible that Americans perceive traditional buildings as being more beautiful or pleasing to the eye than modern ones.

By contrast, the survey describes the minority taste in language that arouses little sympathy. Or maybe that merely reflects the bias of this writer. Either way, the survey’s description is as follows:

In comparison to the traditional buildings in the study, the modern-style buildings follow a more minimalistic, austere style with emphasis on glass, concrete, and sharp geometric shapes. The three modern style buildings that were at the bottom of the list of those Americans preferred all feature a grey unornamented concrete façade with uniform repetitive windows, which may project a more cold and sterile feel compared to the warmer stone and variation in structure of the traditional buildings.

Cold and sterile. Some people prefer that. Still, it would be interesting to see whether further polling might reveal how much of the minority taste for modern architecture reflects genuine admiration for such styles or, instead, admiration feigned for motives of sociological or professional self-interest.

I won’t be holding my breath waiting for that study to be performed.

The survey was sponsored by the National Civic Art Society in order, I suspect, to bolster the case for the proposed executive order called “Making Federal Buildings Beautiful Again,” which remains unsigned by President Trump. It was leaked last February and caused a sensation, but the healthy debate it sparked back then was snuffed by Covid.

In recent years, the NCAS has tried to stop the Gehry Ike memorial, striven to rebuild Penn Station in its original classical style, and, most recently, triggered the effort to rethink the existing mandate for federal architecture. Who are these guys? You’d think I’d be a member (and indeed I am).

A panel held on Wednesday via zoom, sponsored by the American Enterprise Institute to discuss the merits of the E.O., reached no conclusions, although the four panelists voiced varying degrees of support for the proposal. While the new survey on federal buildings was mentioned by NCAS president Justin Shubow, the panelists did not get around to assessing the merits of the E.O. in light of the new information. Most of the back-and-forth touched on weighty academic matters that would never enter the mind of most citizens.

In one of the more striking assertions, former Notre Dame architecture school dean Michael Lykoudis argued that if the E.O. is signed, “those who believe classicism is authoritarian will have seen their point made.” This is one of the leading modernist talking points against the proposal, in spite of the fact that a mandate favoring modern architecture has existed since 1962. But why should the told-you-so’s of a few cranks prevent the public from playing a role, at last, in how federal buildings are designed?

Modernists who oppose the E.O. routinely declare that a stylistic mandate from Washington will erase public participation in the design of federal buildings across the nation when, in fact, no such participation has been solicited for decades. We already have a stylistic mandate from Washington, but it favors styles that three-quarters of the public dislike.

How democratic is that?

Trump is unlikely to sign the executive order until after the election. Why try to curry favor with such a solid majority of the electorate? He should sign it before the election, and watch the heads explode.