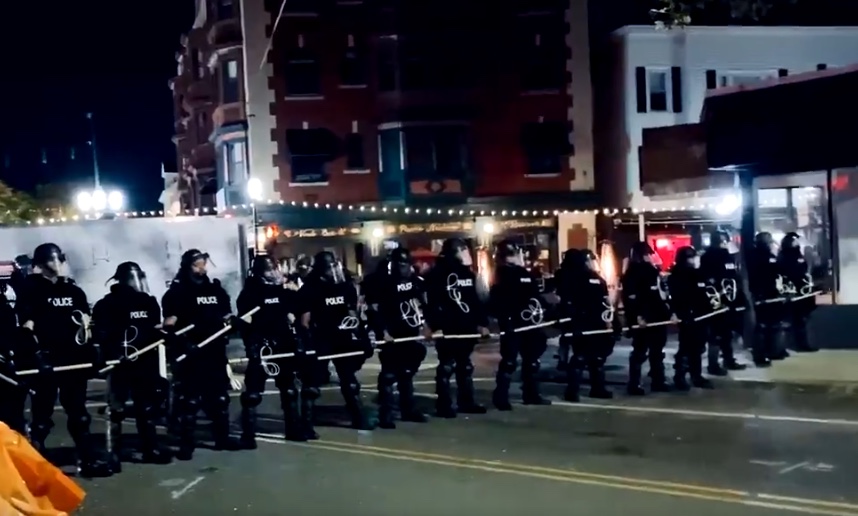 Providence says “NO” – not Federal Hill.

Providence Police have tried a community presence of interaction with protesters. They’ve tried an informal blocking of streets. They’ve tried to stand back and “observe”. Night after night their tactics have been different. Last night they said no more. Dressed in protective gear, they turned back protesters estimated to be over 100, locking down their ability to get onto Atwells Avenue.

Unconfirmed, was that Governor Raimondo was on The Hill eating with her family, which she often does on the weekend to show support for restaurants trying to recover some of their lost business.

The groups were turned back at every attempt to access the dining area. One car was caught up in the side street diverted traffic and there was a brief altercation when a young woman driver came out and confronted protesters to get out of her way. As the media captured the scene, calls came out to block the view and two demonstrators opened small umbrellas in an attempt to block the line of sight. Providence police assisted and soon the car backed down the road. There were several other vehicles caught in an attempt to drive down the congested streets. Lights were on in the 3-decker homes and people could be seen at the doors and windows.

Another nightof protest was simultaneously happening on Elmwood Avenue, with significant presence from Cranston Police at the city line.

The Media have been an integral part of the demonstrations from the first night. A role that is important in documenting what is happening for the public’s right to know. Legacy media (ProJo, TV stations…) have now been joined by digital news, bloggers, podcasters, and citizen journalist efforts, and some groups with a clear and identified position. While walking with the protesters they have narrated what is going on and what they know. Reporters who work for companies usually hold back on personal commentary and giving opinion or even statements of fact that have not been confirmed, documenting while not becoming part of the events they are reporting on. The more free-wheeling media, and literally anyone with a cell phone and a Wi-fi signal often do provide their own version of events, without corroboration, streamed live on social medial. Statements saying that protests were the result of “a biker being struck by Providence Police and now being in critical condition” or calling a violent interaction a “peaceful rally” stand out, particularly in last night’s event. At a time when informal media are filling a void of shuttered legacy media, establishing credibility is all important to serving the public’s interest.

A week of chaos in Providence

Last Sunday a man on a moped was seriously injured when he hit a wall after coming down Elmwood Avenue in Providence, following an estimated 2-300 mopeds, motorbikes and ATVs. Jhamal Gonsalves, remains in the hospital and is said to be in a coma, with several procedures having been done to reduce swelling on his brain.

Providence Police and the RI Attorney General’s office are conducting an investigation on whether or not there was contact between a police vehicle that had been following the group of riders and the moped. That investigation is expected to take at least two weeks, and perhaps longer. Police have asked for video to be submitted to them and they have released two videos that make it unclear if such contact happened.

Jhamal Gonsalves’ family has called for peaceful protest and after initially being behind an event that began at the Knight Library on Monday night, along with Black Lives Matter, and the FTP group, they have made it clear that they do not support violent protests and they are not part of what the family wants.  Gonsalves father has held a peaceful presence at the RI Attorney General’s Cranston office and has had a meeting with the AG. As protests have continued nightly on the streets, escalating in violence, the Gonsalves family continues to say they do not endorse these actions. Last night a family member said, “More prayers, less protests.”

Beyond peaceful protest and rallies.

Injury to police. Protests have resulted in several police and a K-9 dog being injured by thrown bottles and fireworks. Police vehicles have had windows shattered.

Protesters have been arrested – 21 the first night – 7 to 9 the following night. No arrests have been reported from last night.

Wednesday night a cousin of Gonsalves suffered a seizure after being arrested and is now hospitalized.

Thursday night there was a double stabbing.

Also Thursday night there was a fatal shooting in the area. In the same vicinity of the protesters a small group of people were fired upon with several rounds, resulting in a fatal injury of a popular area rapper and father of four. There may have been returned fire. Gang involvement was unclear.

The Police and the Mayor.  Throughout the week, Providence Police have been at the center of the events. First, their inability to stop the hundreds of ATV vehicles coming into the city, with Mayor Elorza saying there were simply too many vehicles for the department to handle, so the police were following the drivers from city line to city line, letting other city police departments know when the group would be going into their locations.

At night the Providence police at first engaged and tried to control the group. Then the tact was to stand back and observe the nightly demonstrations, and ATV rubber burning from a distance of several blocks.

Mayor Elorza has said he is looking for “creative ways” to address the problem and says the police cannot control hundreds of bikers. He said he has reached out to the biker groups and to the Gonsalves family but has not had his calls returned. When an NBC10 reporter commented to the Mayor about how many are saying this is the worst people have seen in the city, Elorza replied, “I push back on this point that nothing is being done and it’s as bad as it’s ever been. That’s not the case, period.”

Cranston Police have been on Elmwood Avenue at their city line since the first night, setting up a barrier of officers and vehicles, prohibiting the group from going into the city. Many police cars were pummeled with rocks and bottles on the first night. On the second night, Cranston Police brought in large public works vehicles and positioned them across the street, with a greater police presence, effectively holding the line – being joined by Warwick Police. Throughout, the RI State Police have been part of the control efforts. Cranston’s strong presence has been well received by Cranston residents who have made comments on social media.

Two protests. Friday night the protests expanded to include an additional protest on behalf of the Gonsalves’ cousin, this one beginning at Classical High School, with a group estimated to be about 40. The group grew to over 100 and began walking downtown, and then up to Federal Hill, where diners were eating outdoors for the popular Friday night and weekend events.  Providence Police and RI State Police stepped up their interactions with protesters and prevented the group from entering within a block of the restaurants, though chanting could be heard. Eventually, after several attempts to get to the dining area, the group turned back towards downtown.

Back on Elmwood Avenue, night four began with a very large, increased police presence. No arrests were reported. This is a developing story…