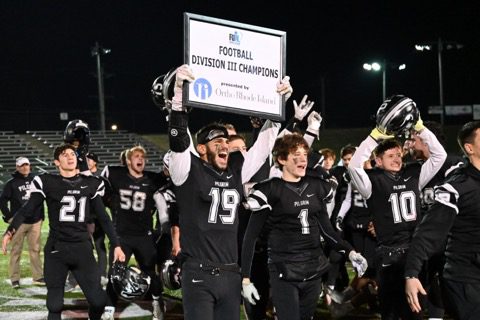 Top Story of the Week: Football with the Pilgrim Patriots

(We had a great response to our story by John Cardullo, sportswriter, this week as he chronicled the victory of the Pilgrim Patriots Football Team, after 44 years chasing their SuperBowl – if have a sports story that should be covered get in touch with us…)

It has been 44 years since Pilgrim High School had won a State football Championship. None of the current players were even a thought in the universe yet, and in some cases their parents were in diapers, or not even born.

The drought seemed like it would last forever; that was until last season when under new head coach Blake Simpson, the Patriots fell to the Central Falls Warriors in a close game 14-10. “That loss was tough one,” said Simpson, “it was so long between championship games, we were truly happy to be there. But to come so close to winning and not finishing the mission only served to propel this year’s team and set their sights on only one goal, and that was to win the Super Bowl!”

Pilgrim knew that they could return and had many things in their favor. Being a heavy junior based team meant many players would be returning.   Making it to the Super Bowl the year before, and losing, was fresh in their minds – experiencing that feeling in the pit of your stomach to come so close only to walk away with nothing only served as a motivating factor for this now heavy senior squad.

The team also knew that there were factors that could get into the way of a return visit. A long season where they now were the targets rather than the team in pursue of the prize was one, and then there was the big “X” factor, and that is staying healthy.

Simpson who was in his second year as the Patriots head coach and the fifth as a coach at Pilgrim, tapped into the senior leadership and they responded in a big way. The team was led by senior running back Demitri Ayres who was mister everything for the black and white.

They began to focus on the season even before the school year ended. Making sure that they were in the compliance with the Rhode Island Interscholastic Leagues guidelines, the senior and junior leadership was a huge factor as the Patriots entered the 2019 season. Pilgrim who had 8 freshman, 11 Sophomores and 20 Seniors, and ironically only 4 juniors, got down to business from the opening kick-off to the Super Bowl Championship by going undefeated in the regular season, and running the table in the play-off, on their way to the Division 3 Super Bowl, where they would face the Tolman Tigers. It was a rematch of the 1975 State Championship game that would see Pilgrim go 8-0-1 and walk away with a 20-7 championship win. Fast forward 44 years into the future and the Patriots and the Tigers squared off once again, with the Patriots going on to post a tough 22-14 victory.

“This team was a special bunch,” Simpson said, “they were a small squad in numbers, 43 total players dressed for each game. But they believed in themselves and they believed in each other. No player wanted to let the others down.” And Simpson who is a Math teacher at Rhode Island Alternative Academy, is young enough to communicate with the players on their level, but forceful enough to get their attention when he needed to, “when you get a bunch of kids who truly like each other, who like playing together and are willing to help each other out; well that makes it that much easier for me and the coaching staff to do our jobs.” Asked about the future, Simpson replies, “I just want to enjoy the season that just ended, we have plenty of time to look ahead. Taking a brief peek, we have 23 players returning from a Super Bowl Championship team, so I am feeling that we are in a pretty good position.”