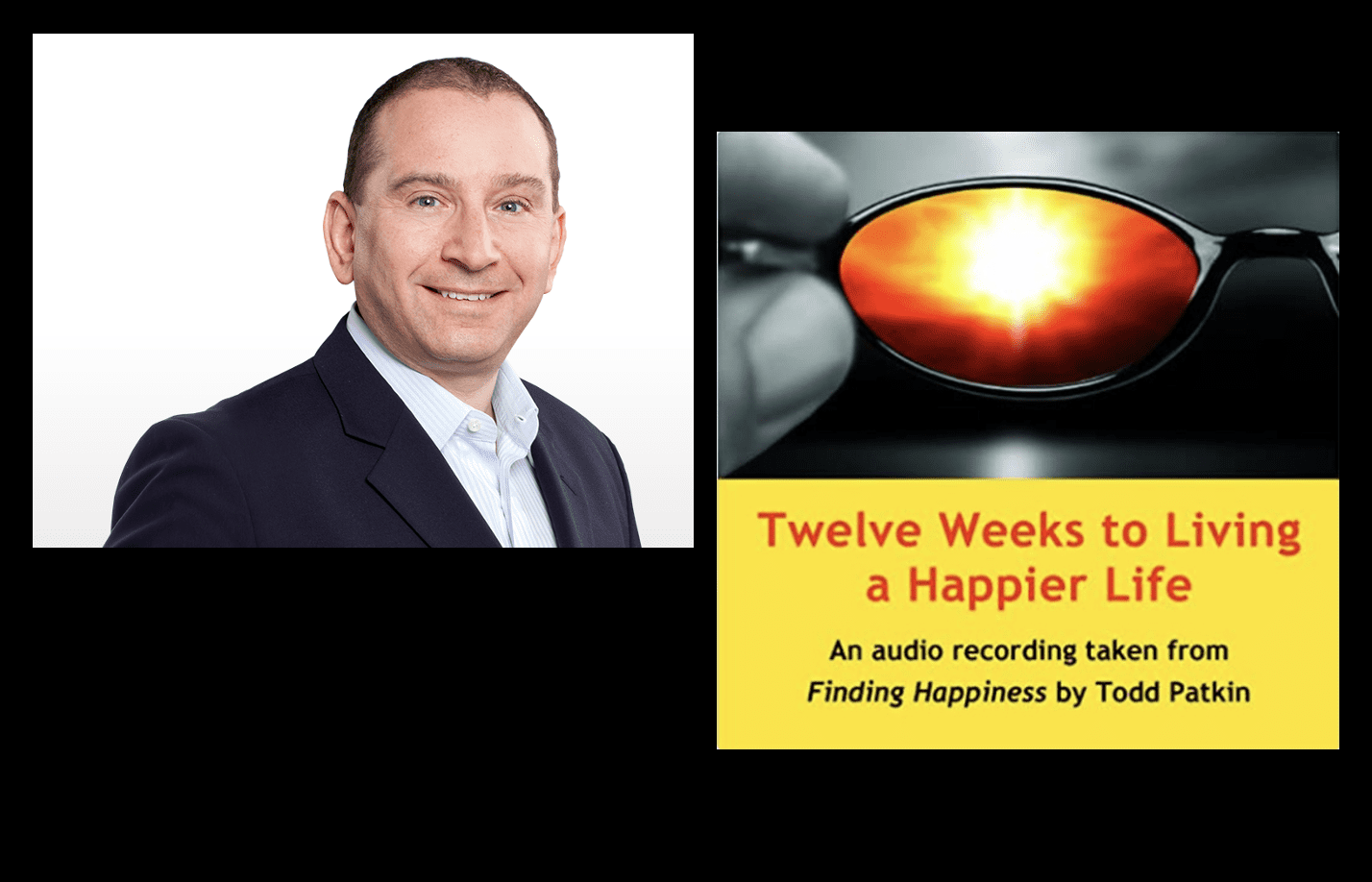 Finding Happiness: One Man’s Quest to Beat Depression and Anxiety and–Finally–Let the Sunshine In

Todd Patkin describes himself best – “Happiness Coach. Chief Happiness Officer, Coach and Speaker”. As the author of “Finding Happiness: One Man’s Quest to Beat Depression and Anxiety and – Finally – Let the Sunshine In”, you catch the message right away. If not very specific, you might guess it from the color of his book – bright sunshiny yellow, complete with reflective sunglasses. The subliminal message might be – if we all get happier, we’ll help each other be happier, too.

Having known and worked with Todd in the past, his message of happiness is a personal one. One he shares openly, one that might surprise us as you hear of his success in the corporate world. We all know appearances can be deceiving. And never is that truer than when it’s applied to happiness. One assumes that anyone with financial success, a loving family, and a respected position in the community would be the very picture of contentment. But we know that for many people at the top of their game, that couldn’t be more wrong. For Todd, it’s been a lifelong struggle – one which he wins daily – and one which he shares to help us all live lives that are happier and more fulfilling.

Todd explores the painful emotions that often lie just beneath the surface of a perfect life. From a childhood riddled with insecurity and perfectionism to an adulthood marked by the exhaustive need to always excel and achieve more. And then, a devastating breakdown at the age of thirty-six. Patkin chronicles his own very difficult but ultimately successful journey toward cracking the happiness code.

Todd is quick to tell us that happiness isn’t a job or a bank account or a car or even a group of people. Happiness is the daily act of choosing to accept and love yourself as you are and for who you are.

As this engaging and unusual book reveals, real happiness isn’t measured by what your life looks like, but by how you look at your life. If your current view isn’t what you’d like it to be, Finding Happiness can be a tool to help you bring everything into focus. Not only does Patkin share his own hard-won insights, but he also ends the book by giving readers the step-by-step tools they need to build their best and happiest lives.

As he reinforces the message that happiness is a choice, and that there is work to do to get there, he has added a workbook which will guide you through the steps you need to take for your own life.

And more recently, Todd has added a 12-part video series, where he speaks directly to those who want help to have their lives happier, more joyful, more fulfilling. Each video is a thoughtful assignment for you to do for one week, before moving on to the next. The video series is free. All Todd asks is that you subscribe to the You Tube channel, which will update you on new videos, and consider sharing it with friends and family who may benefit by the same message you are receiving.

Throughout Finding Happiness, Todd’s story is augmented by commentary from nationally recognized licensed clinical psychologist Dr. Howard J. Rankin, whose expertise has been featured on CNN, The View, and ABC s 20/20. Dr. Rankin provides explanation and advice on topics ranging from handling bullying to tackling challenges in a healthy way to dealing with depression.

Part memoir, part self-help guide, Finding Happiness is a compelling portrait of one man’s quest to find the good life that eludes so many of us. Packed with honest observations and lessons that can be applied in the living room, the boardroom, and just about everywhere in between, this book has something to teach us all.

As Todd explains quite directly, “my breakdown was actually my breakthrough. I had finally had enough! I was no longer willing to ruin my own life, as I now realized I had been doing for the last three and a half decades. And yes, today I can honestly say that I am a truly happy and fairly relaxed person.”

He says he first had to learn to control his own brain, and to learn to simply accept and love himself for who he is. He needed to understand that even if he wasn’t scoring goals, receiving accolades, or achieving every minute of the day, he was still a good and worthy person.

But what about those times when we make mistakes and do dumb things? Todd says that once you accept that you are simply a human being and that human beings are fallible, it only makes sense to cut yourself some slack and maybe even have a good laugh at your own humanity.

“I also realize that my past bouts of depression, anxiety, and even my breakdown itself are not reasons for shame. Instead, they are the very common results, in my opinion, of living lives today based on our culture’s messed-up definition of success—an achievement that comes at the expense of balance, family, and, thus, happiness,” Todd adds.

Todd says that, ultimately, he believes he was put on this earth and made to go through so much unhappiness and anxiety in his own life so that he would be able to help others learn to become much happier themselves.

Todd adds, “If Finding Happiness improves lives in any way, then my greatest ambition will have been fulfilled”.

Todd’s 12 Weeks to Finding Happiness Boot Camp is best viewed in just that way – one a week – and then focus on the lesson he gives – if you’re a fast learner, maybe you can do two a week. However, you choose to wade into the happiness pool that others are learning, we encourage you to take advantage of it – why not start, right now? Choose to be happy.

Some links for you to use:

Check out Todd’s new video series, Finding Happiness with Todd. In this new series, Patkin identifies twelve things that will help anyone begin to lead a happier life, especially if they’re added on one at a time to your life and in the order in which they’re given. You’ll begin to focus more often on the behaviors, people, and things that will enrich and fulfill you, and that will inspire your positive physical, mental, and emotional growth. And conversely, you’ll stop allowing your negative moods and habits to dictate your life.

If you’re ready to take control of the stress, anxiety, and negative thoughts that have been running your life so far, then tune in to learn about Patkin’s Twelve Weeks to Living a Happier Life…and why they’ll work for you.