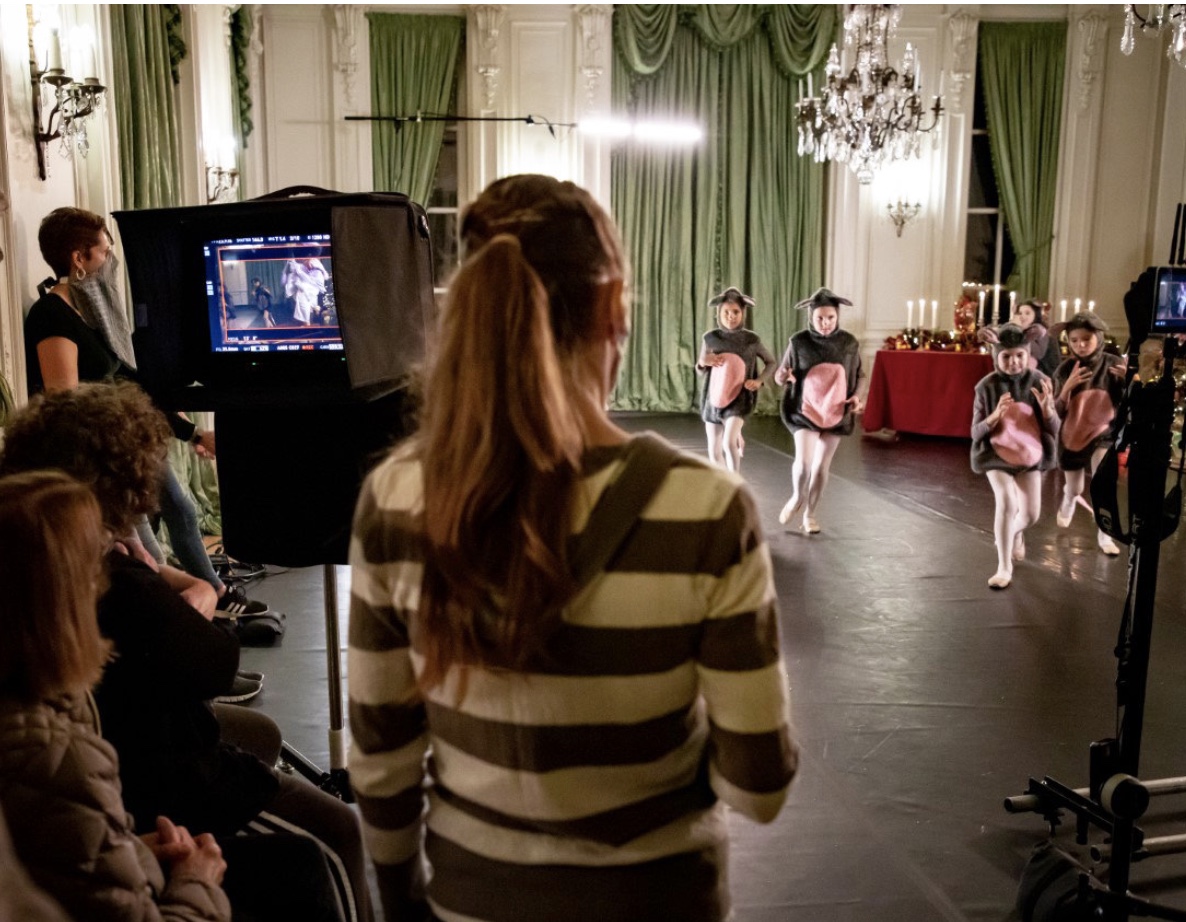 To make a beautiful thing happen, even in quarantine – Richard Asinof

A new dance film, “Through Her Eyes,” re-imagines “The Nutcracker,” performed on site in Newport by the Island Moving Company, will debut this week on RI PBS

This year, Island Moving Company created a new dance film to re-invent its traditional holiday ballet version of “The Nutcracker,” shot on location in many of the historic mansions in the City by the Sea. The film will have its broadcast debut on Rhode Island PBS on Friday, Dec. 18, at 8 p.m.

The film, “Through Her Eyes,” directed by Marta Renzi, was an artistic response to the challenge and disruption caused by the coronavirus pandemic, where performances before live audiences were no longer possible.

For Island Moving Company, a dance troupe founded in 1982 known for its live performances, innovative choreography, and intimate interactions with the audience, the challenge was how to re-imagine the traditional holiday classic in such a way that the audience still saw themselves as participants in the journey.

Here is the ConvergenceRI interview with Miki Ohlsen, Artistic Director of Island Moving Company, and Marta Renzi, the director, of “Through Her Eyes: A Newport Nutcracker Reimagined,” talking about the details behind the film and the choreography – and the collaboration and convergence that made it possible to create a new holiday tradition.

ConvergenceRI: In capturing the movement of the Nutcracker on film, during a time when “live” audiences are not possible because of the pandemic, how did you want to create a sense of participation for the audience?
OHLSEN: Island Moving Company prides itself in creating a sense of participation in every performance that we present. Our live performances are very intimate and up close, providing the audience with an experience of “living” the performance, being involved in and part of the performance.

The film was another amazing vehicle to achieve this goal as well. Instead of being a presentational video of “The Nutcracker,” this film provides an intimate view into each character while never diminishing the exquisite dancing that takes place. There is a feeling of knowing these characters and living their journey, especially the journey of Clara, whom we call Tess.

ConvergenceRI: What role did the settings and stages of the historic mansions in Newport play in telling of the story?
OHLSEN: Island Moving Company’s original live “Nutcracker” was envisioned for Rosecliff mansion. The history of who lived there, how they might have lived, and celebrated of their wonderful Christmas Eve, was what the original was created around.

It was not a far leap to the film version when we were allowed to envision each scene in a location that completely supported the scene. Why not create an entire Candy Cane House out of a children’s playhouse? Why not put our version of Tea in the glorious Chinese Tea House at Marble House? Where else would one put the stately Trepak Russian Dance than in the Gold Ballroom at Marble House, or Spanish in front of the ornate railing at the front drive of the same mansion?

Each site dictated the dance and each dance told us which site to use. How lucky were we?

ConvergenceRI: In terms of film productions, what kind of innovation in dance movement was allowed, and how much was scripted?
OHLSEN: Island Moving Company always innovates with movement. However, this is a classical ballet, created in the classical tradition; the classical sensibility and tradition exists throughout. That was our goal.

RENZI: Early in pre-production, I recommended to Miki [Ohlsen] and Danielle [Genest Konicheva, Associate Artistic Director] that they edit the music in advance, letting that be my shooting and editing guide.

That meant that our “storyboard” was very carefully scripted in the sense that the movement was choreographed down to the last note of the music. [I’m sure Miki would tell you this was one of the most challenging aspects of pre-production.]

In post-production, in editing, it was another kind of challenge: there was very little wiggle room in terms of time or music.

So, the choreography to Tchaikovsky’s music – itself a kind of script – was completely pre-planned, with no room for improvisation.

How exactly our protagonist, Tess, would carry us from scene to scene was more open. Her mood, perspective, and action –“her eyes” – were the engine that would move us from place to place and, ideally, from emotion to emotion.

We were lucky to have a talented actor/dancer, whose performance on the spot – whether dreaming in bed or falling in love with the toy nutcracker – could deliver that aspect of the story.

ConvergenceRI: [This question is for Marta Renzi]. How much of your work as a film director of dance was influenced by your studies at Hampshire College, which has produced any number of influential film directors and actors?
RENZI: Richard, full disclosure, you went to Hampshire too, right? Non satis scire [the motto of the college, which translates as, “To know is not enough”], and all that. And, do you know that influential Ken Burns was my floor-mate in Merrill House [one of the college’s dorms]?

In-jokes aside, as a director, I often feel somewhat of an impostor, having never studied film. Hampshire, however, prepared me to ask my own questions, to be my own teacher, and to dare to swim in the deep end [of the pool]. It may also be true that a Hampshire education, which emphasized the overlap [convergence] in areas of study, prepared me to be comfortable with hyphenated pursuits – dance and film.

ConvergenceRI: What were the most challenging parts of the production?
OHLSEN: The most challenging part of this production was editing the essence of “The Nutcracker” story down to 28 minutes. Then after doing that, to decide which pieces of music would be conducive to the editing, so we could create a whole ballet of this two-hour plus original.

ConvergenceRI: Are there further opportunities for collaboration for Island Moving Company and Marta Renzi to capture new performances of other dance works?
OHLSEN: I certainly hope so. We made another film with Marta this summer, “Out of Ruin,” that has met with particular success in the dance film genre. This has been one of my favorite collaborations of all time.

Marta is a genius and to have her at our side as Island Moving Company took the plunge into dance film was the perfect choice. Even all of our dancers are asking: “Will we make another Marta Renzi film?”

ConvergenceRI: Given that these are disruptive, fearful time, particularly in terms of public health, was there any specific messaging and direction that sought to be reassuring in a time of darkness?
OHLSEN: Island Moving Company set out to create a holiday ballet full of all the magic and joy that we all know can exist in this world. This coming-of-age tale, through a young girl’s journey in her dream, conveys a message of hope and promise for what is still to come.

RENZI: I’ll let Miki speak to the specific message of the completed work that is “Through Her Eyes.” For me, in many ways, it’s still “The Nutcracker,” with the bourgeois aspirations and sweetened worldview that comes with that, perhaps giving balm for that very reason.

But I can attest that for everyone involved – child, dancer, crew member, choreographer – to have the chance to do what they do well, to be able to re-imagine what they’ve presented year after year, to experience delight in a time when so much is dangerous, is a message of healing in itself.

I have no doubt that the subtext of “Through Her Eyes” expresses a kind of holiday miracle: together, we made a beautiful thing happen, even in quarantine.

ConvergenceRI: What haven’t I asked, should I have asked, that you would like to talk about?
RENZI: We often hear that film is a collaborative enterprise, and it was no less true in this instance. Miki [and Danielle] brought years of experience with “The Nutcracker” and with Newport as the grounding for the project, not to mention years of developing costumes and sets – the look.

The dancers brought their knowledge of the roles, and the particular willingness to make things come alive in unusual sites that’s a hallmark of Island Moving Company. I’d also like to highlight the contribution of the cinematographer, Jon Gourlay [who happens to be a Rhode Island native]. This is the third project where I’ve relied on his eye and expertise to help create magic, both cinematic and emotional.