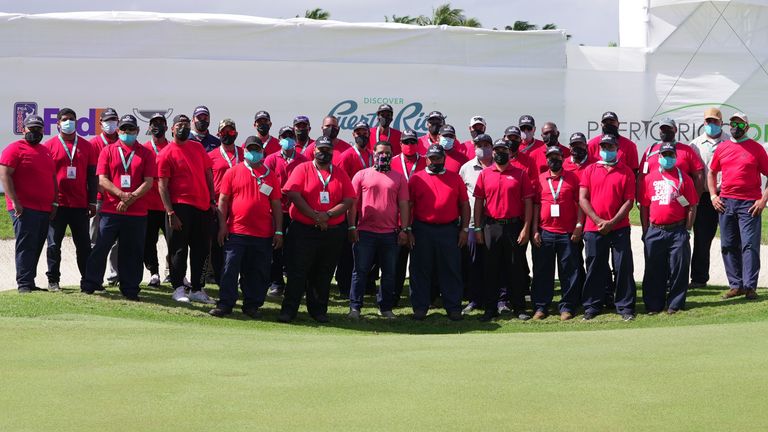 Photo: Golfers everywhere are honoring Tiger by dressing in red and black.

For Tiger Woods the road to recovery will be a long road back, but if anyone can do it, it is Tiger!

The news came across the news “wires”. So unbelievable that you had to read it or hear it several times to have it sink in and register. Tiger Woods was in a car accident that by initial reports had him in critical condition. The bits and pieces that began to get reported ranged from Woods was clinging to life, to his injuries were so severe that he may lose his leg, to he would recover but it will be doubtful if he would ever play golf again to… The bottom line was that the news was so jarring and shocking and totally unexpected it brought us back to the moment a year ago where another sports legend was in an accident, but for the Los Angles Lakers retired basketball player Kobe Bryant, it proved to be fatal. The news about Tiger Woods was just coming in. No telling where it would twist and turn in the next few hours.

For many of us, we have heard the story and for a few of us, we can still remember the image of a 3-year-old Eldrick Tont “Tiger” Woods on the Mike Douglas Show driving the ball off the tee better and longer than most adults, certainly it seemed at the time, when young Tiger appeared on the daytime talk show and schooled popular comedian and golf enthusiast Bob Hope on national television. What everyone who watched what this phenom did had no idea what the future held for this pint-sized conversation piece, but his father, Earl Woods, knew exactly what was in store for Tiger, for he just unleashed his son on the world and into the sport of golf.

When Woods turned professional at the age of 20, in 1996, after an amazing Junior College (Stanford University) and amateur career. His professional career soared, winning his first of 15 Majors (Masters (5), PGA Championships (4), US Opens (3) and the Open Championships (3)). Playing all over the world, Woods had won 110 tournaments on the professional circuit and was ranked the number one golfer in the World for a total of 683 weeks. His 82 PGA wins currently has him tied at number one with Sam Snead a true legend in his own right.

In the world of professional golf there has always been that “guy” – and then, everyone else. Walter Haugen, Bobby Jones, Byron Nelson, Sam Snead, Arnold Palmer, Gary Player and Nicklas. As Nicklas’ career wound down there were many names mentioned to step up and take the baton, but it wasn’t until Woods came along, we discovered those other players were just names and stand-ins for the player who would be known as the greatest golfer ever.

But for Woods the rise to the top was not always smooth. It was clear his talent had cast a shadow over the PGA ranks. Woods was brass and confident and knew that his presence in any golf event had most all other golfers content to settle for second place. His talent and ability to hit the ball long caused many golf courses on the tour to “Tiger proof” their course by making it even longer by pushing back the tee boxes and re-designing the locations of the greens. It became apparent to the PGA if they did not do something to make the course more difficult, Tiger Woods could be the downfall of the sport that he helped grow and expand. It was the PGA’s thought process that the other golfers would adapt, and they could play a looser brand of golf and challenge Woods.

He became the face of a new company that decided to expand its grip on basketball and enter the untapped golf market. Nike signed Woods to an endorsement contract like the one they had with the greatest professional basketball player of all time, Michael Jordan. By signing Woods, Nike sent out a message that they intended to be the number one name in sports. Nike went full force into the golfing market signing Woods to a $105 million dollar contract extension going from a golf start-up company to the leading golf apparel and equipment company in the world and was immediately the number one brand name in golf. For Woods’ part all he had to do is what he did best -win! And like Jordan, Tiger Woods desire to win, to succeed and be the best in the sport drove him to the top of his profession. Nike even allowed Woods to suggest and make design changes to the golf club line, making him an involved partner within the company. By his late twenties Woods was on top and it seemed that the ride was not going to end anytime soon. For Woods, his many endorsement deals earned him more than he ever received playing golf on the professional circuit. The Nike/Woods brand helped other athletes not just in golf but in every professional sport played. For Nike and the athletic endorsement market, times were good!

As fast as things began for Tiger, his life turned. Married in 2004 to Elin Nordegren, a Swedish former model, the fairy tale marriage produced two children, a daughter Sam Alexis Woods in 2007 and in 2009 a son named Charlie Axel Woods. Later in 2009 Woods became embroiled in a scandal involving Woods having several extramarital affairs which was brought to light after a late-night accident occurred. By the end of 2009, several women came forward claiming to have had sexual relationships with Woods. By early 2010 Woods publicly admitted to the affairs and entered a 45-day therapy program and put his golf career on pause. In August 2010 Woods and his wife divorced after six years of marriage. During that time six of his major endorsement sponsors dropped Woods as a spokesman, however Nike was one of the few that stuck by Woods.

While Woods experienced lower back issues that prevented him from matching the success on the golf course that he had years earlier, Woods tried to get back into the routine which had served him well most of his life and that was getting back on tour and playing golf. But in May 2017, Woods was found asleep in his car in a traffic lane, preventing traffic from flowing. The car’s engine was running, and Woods stated that he had taken prescription drugs which he didn’t realize how they would interact together. Woods attended an out of state intensive program for an unspecific issue. Later that year at a hearing, Woods pleaded guilty to reckless driving, where he received probation and was fined.

Woods underwent several back operations and procedures that had even the biggest Tiger Woods fans in doubt of a professional comeback. But a transformation occurred within Woods when he returned, although struggling to get to the level expectation play, Woods began to open himself up to the other players on the PGA circuit, particularly the younger players, becoming a mentor. His level of competitiveness still burned within him, but a softer side began to emerge; one that no one had ever seen before, a smiling Tiger Woods during a competition with members of his group, and a more personable player who was interacting with the members of the gallery. Tiger who sat out of the Ryder Cup because of the surgery to his back agreed to serving as assistant Captain and was credited by may of the golfers on the team to be very valuable both on and off the course.

In April 2019 Tiger Woods did what was determined to have been impossible a few years earlier – Woods came all the way back when he became the oldest player ever to win the Masters. Remembering Woods walking to the 18th green to putt what was going to seal the championship, the old vibe was there, every golf fan was on their feet and when the ball rolled into the cup the gallery erupted and Tiger Woods was back on top! It was in this moment that all the issues, the trials and tribulations melted away and proved that Tiger Woods was someone we watched as he grew up and he was someone whose life was lived in a microscope and like Arnie’s army Tiger Woods fans were true to him through good times and bad.

Now with the news that Woods was in a serious car accident, all we are hoping is that he will recover and although he may never be able to play at the Tiger level anymore he’s been our guy for as long as we can remember and for all the memories that we have of his greatness, it was the recent one of Tiger caddying for his son, Charlie, are a recent event when he was just a proud father with his son enjoying the day. That is the picture I hope to see in Tiger’s future, and his playing in the 2022 Masters. Never bet against Tiger Woods.

Editor’s Note: A few days ago, Tiger Woods was transferred to Cedars-Sinai Medical Center and has had at least one follow-up surgery, and procedures for his injuries. A spokesperson said Woods “is now recovering and in good spirits.”